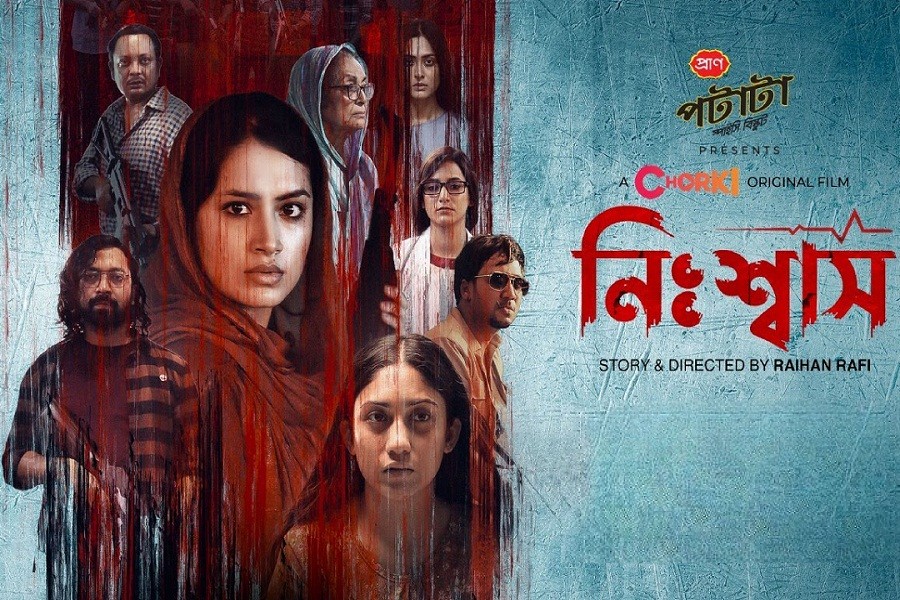 In a dark hospital corridor, a woman is looking for something, brandishing her rifle and shooting indiscriminately, while a fiery poem is heard with sharp, rocking background music.

Such was the trailer of 'Nishwas,' the Raihan Rafi-directed film released on the online platform Chorki on September 15. The film has created much anticipation and excitement in the internet cinephile community, and finally, watching the film has been a unique journey.

In the fictional Purabi Hospital, the nurse Nipa, played by Tasnia Farin, is waiting to fulfil her mission, while Sumaiya, played by Safa Kabir, is barely clinging to life after drinking poison. Suddenly, a group of militants attack; they spray bullets everywhere, and innocent people die. One of the militants is a former banker. What happens next forms the plot of the film.

Firstly, the plot is unique and bold. Amidst the 'culture war,' Raihan Rafi has done laudable work by venturing into such a storyline. However, the plot has a few holes; some parts could have been handled with more care and precision.

The story feels a bit uneven in places, lacking a certain finesse.

However, the core theme of the film is noteworthy. The director has woven the two worlds together and showed how corruption could soil even the purest of ideas, the best of the people. One of the film's shortcomings is its overly dramatic ending; the yearning for a better ending will remain there.

The making of the film has been done with care. Most of the shots have been one-takes, so it has a distinct, authentic feeling. In addition, the vast set has given the film additional genuinity, and the camera movements have been passable.

The background music has been composed by taking slight inspiration from a South Indian film, which sounds amazing, nevertheless, and gives the film a dark and gritty tone.

The colour grading has been quite suitable; the dark undertone has given the film a sense of impending doom and bitter desperation. The emotional quotient is high and somewhat melodramatic, but it does not dampen the film's overall mood.

Tasnia Farin has been presenting the audience with extraordinary performances one after another, and in this film, she carries her role with utmost ease.

Safa Kabir, the popular 'pretty girl' face of television natok, has surprised all with her portrayal of Sumaiya. From her expressions to her attitude, everything has been perfect.

Imtiaz Barshon has been phenomenal as well. Sayed Zaman Shawon has not shone as bright as the others; at places, his performance falls flat. Farzana Chobby has done an outstanding cameo as a negative character, and she has shown her acting prowess here.

Overall, the film is a mixed bag. However, amidst the controversy surrounding Shonibarer Bikel, the film explores the sensitive issue of terrorism; for this, it deserves applause.