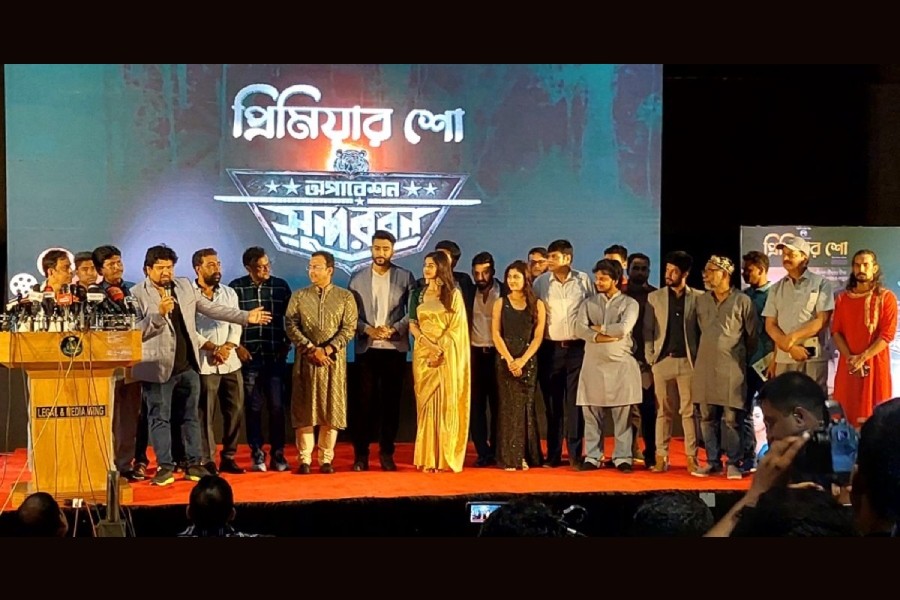 One of the much-anticipated films in recent times, produced by RAB Welfare Cooperative Society Limited, the premiere of the film was held at Bashundhara City's Star Cineplex in the capital.

Deputy Minister of Environment, Forest and Climate Change of Bangladesh, Habibun Nahar, was present at the premiere as the chief guest, while Benazir Ahmed, inspector general of Bangladesh Police, and RAB director general Chowdhury Abdullah Al-Mamun were present as special guests.

“With the cordial cooperation of RAB members and other elite forces, apart from the people of the Sundarbans, our long-awaited film is all set to thrill our audiences this Friday onwards," Dipankar said at the premiere.

"This is an amazing story with the involvement of our 1,300 cast and crew members, narrating the saga of the mission against the pirates and the aftermath of their post-pirate life, as well as the livelihood of the natives living around the Sundarbans. And we request everyone to watch this dynamic presentation on the big screen," he said.

Based on the wild setting of the Sundarbans and the dark side of its pirates as the important aspects, the commendable narrative of the film has been accompanied by the remarkable action-packed performances of the actors.

Shooting of the film was held in multiple remote areas of the Sundarbans, under the supervision of RAB. Actor Siam Ahmed, alongside Ziaul Roshan, Riaz Ahmed and others underwent special training by RAB before the shooting in the Sundarbans.

The film is set to be released this Friday  (September 23) at several multiplexes and theatres across the country.