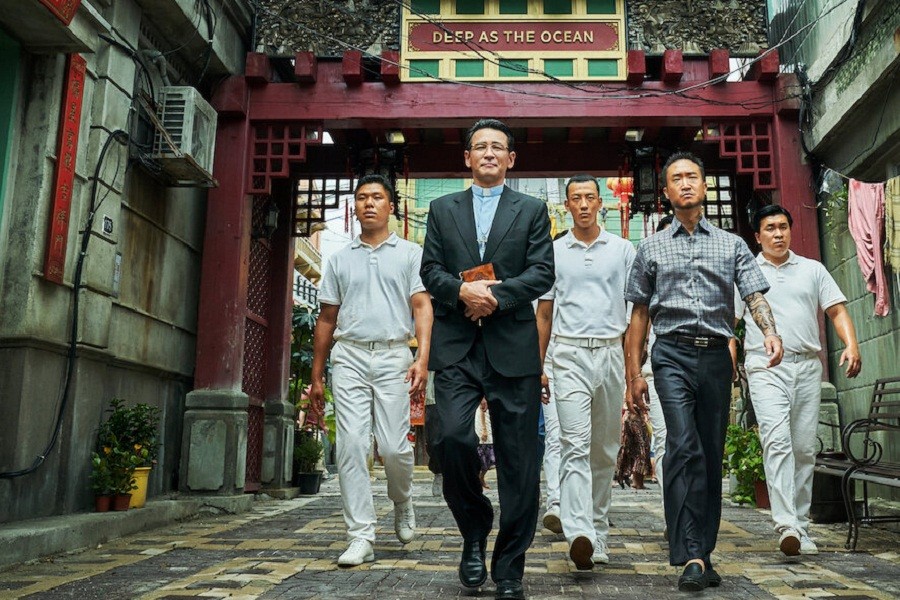 Drug crime thriller series have been popular since Netflix’s Narcos in 2015. A drug kingpin is ruling over the country behind the curtains, pulling off political strings, and local and international authorities teaming up to subdue him- a popular trope of this type of genre.

This time, a K-drama joined the bandwagon too. It’s Narco-saints, taking inspiration from a real story and popular crime thriller franchises like Narcos.

The story of this show is inspired initially by Jo Bong-haeing’s real-life story, a South Korean drug kingpin who operated in Suriname and was extradited on drug charges in 2011.

The show’s plot starts on the same page but with a fictional character, Jeon Yo-hwan. He is a South Korean criminal who fled his country and started a new life as a Christian pastor in Suriname. In the guise of spreading religion, he operates a drug network throughout the country and keeps on good terms with the corrupt Surinamese government.

Gaining success in South America, Jeon seeks to turn more profit by entering the Korean drug market. But who is to stop him?

Here comes the show’s protagonist, Kang In-gu. Initially, he is a standard Korean guy who works day and night to turn around luck for himself and his family but also seeks a way to gain fortune faster, so he doesn’t work himself to death like his late father.

Acquiring his best friend Eung-Soo’s help, Ingu gets into the skatefish business in Surinam -- fishes that cost little in Suriname but sell at high prices in Korea, a profitable business.

But things don’t go smoothly for him. As he is the “good guy getting into problems,” he ends up working for Jeon and as a double agent for NIS, the National Security Agency of South Korea.

As he has the survival instinct, a knack for business, and the ability to talk himself out of sticky situations, can he aid NIS in tracking down Jeon and double-crossing other rival factions? The six episodes of this show have the answers.

Narco-saints has an ensemble cast that includes Ha Jung-woo, one of the top-grossing South Korean actors of all time. Also, NIS agent Choi Chang-ho is portrayed by Park Hae-soo, who acted in the popular Squid Game and Money Heist: Korea.

This show leaves no stone unturned, showing the ruthlessness of drug kingpin Jeon and the mind games played by Ingu to get revenge and save himself. Although this drug crime thriller show doesn’t show any originality, efficiently using this genre’s popularity formula makes it harder to flop.