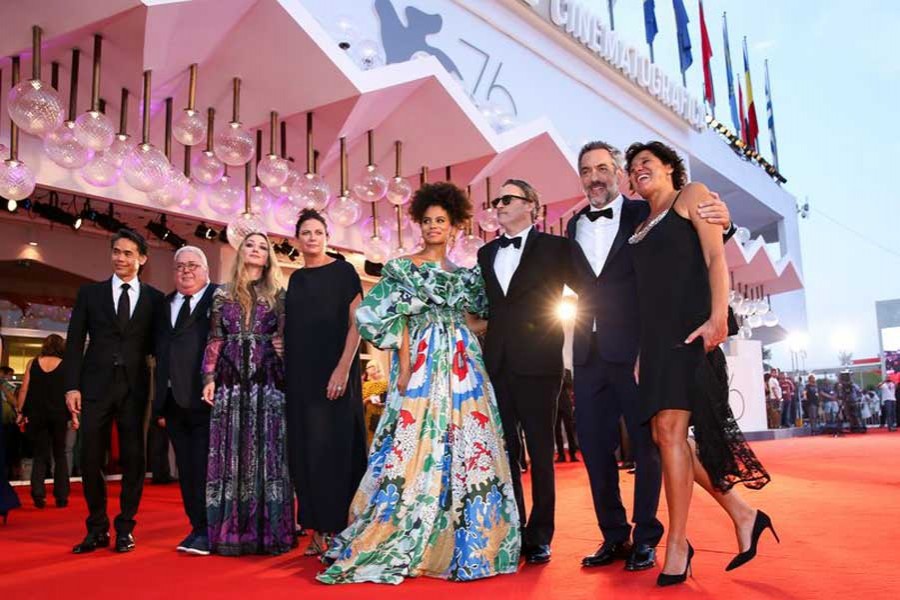 Director Todd Phillips (2nd R) and other cast members pose on the red carpet for the premiere of the film "Joker" during the 76th Venice International Film Festival in Venice, Italy, Aug. 31, 2019. (Xinhua/Zhang Cheng)

The film "Joker" by American director Todd Phillip was awarded on Saturday the Golden Lion at the 76th Venice International Film Festival.

The movie is a standalone story of the origins of Joker -- the criminal mastermind and well-known nemesis of comic superhero Batman -- in a never-seen portrait of the man behind the mask.

Set in a broken-down Gotham City between late 1970s and early 1980s, it shows the progressive evolution of Arthur Fleck, a clown-for-hire living with a mentally fragile mother and struggling to keep his own peace of mind.

Impressively interpreted by Joaquin Phoenix, the character is seen as slowly falling into the ruthless mask Joker, when all of his hopes for kindness, love, and social recognition are lost to him.

French-Polish director Roman Polanski won the Silver Lion Grand Jury Prize for his "J'accuse" (An Officer and a Spy) exploring the judicial and political drama of French Capt. Alfred Dreyfus, who in 1894 was falsely accused of spying for Germany, and sentenced to life imprisonment.

Presided by Argentinian director Lucrecia Martel, the Venice international jury also awarded a Silver Lion for Best Director to Swedish Roy Andersson for his "About Endlessness".

The Marcello Mastroianni award for Best Young Actor/Actress was bestowed to Toby Wallace, playing in Australian director Shannon Murphy's "Babyteeth" the touching role of a young drug dealer who first befriends, and then falls in love with a teenage girl struggling with a lethal illness.

The Special Horizons Jury Prize went to Filipino director and screenwriter Raymund Ribay Gutierrez for the movie "Verdict", which explores the problem of domestic violence in the Philippines.

LION OF THE FUTURE, VIRTUAL REALITY

The jury of the "Luigi De Laurentiis" Venice Award for a Debut Film -- chaired by Serbian director Emir Kusturica -- conferred the Lion of the Future to Sudanese filmmaker Amjad Abu Alala, for his first feature "You will die at 20" running in the Giornate degli Autori (Authors' Days) section.

The 76th edition of Venice Film Festival has run at the Lido of the Italian lagoon from Aug. 28 to Sept. 7.

Venice Film Festival will go ahead in September: Veneto governor

Drive-in movie stages make a comeback in US