The role of international community 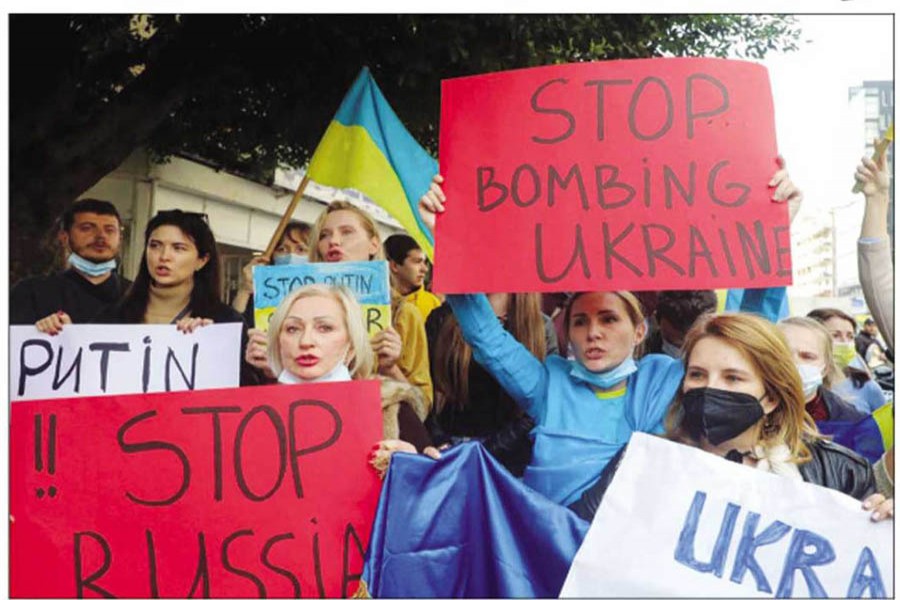 Is the Russian invasion of Ukraine a crisis? The answer depends upon how we understand the situation. Here in Canada, I notice few reactions among political and civilian elites or the general public. People are worried about its supposed impact on the gasoline price hike, and economists worldwide are talking about its consequence on global trade and commerce, recession, unemployment, and inflation. Political pundits and commentators have been publishing articles in world-class magazines like Foreign Affairs, Foreign Policy, The Economist, and the Project Syndicate, whose central theme is the hegemonic power game. The materials and messages of these articles are not much different from those we read during the Cold-War period. The Ukrainians' miseries little matter in the elite or public circles.
The Ukrainian crisis reminds me of my days in 1971. For nine months, the superpowers played their hegemonic game over our personal and social miseries. We hoped and prayed for public and political support from the international community, the same way the Ukrainians are doing. We fought and prayed for our democratic rights, the Ukrainians are fighting and praying for their national sovereignty.
Although the context is the same, the situation is very different. Today's world is digitalized, and information and pictures instantly spread worldwide. This technological development has added a new responsibility to the general public, who care little about what happens around them and the world. They seem content with their personal and family lives and remain preoccupied with these affairs. However, their awareness and concern for the current affairs seem demanded by the prevailing socio-economic and political situation in the global village. And this is for their interest.
Let us take a closer look at the global crisis created by Putin's invasion of Ukraine. We will use the term Putin's aggression instead of Russian invasion because Russia belongs to the people of that country. It will be a mischievous mistake if we think that the Russian people have invaded the Ukrainian people.
After WWII, the world got divided into two belligerent blocs-NATO and Warsaw Pact. The U.S. led the NATO countries while the USSR led the Warsaw pact countries. These military-treaty organizations fought the humanely insane Cold War for about four decades. The Warsaw pact died a natural death with the breakdown of the USSR in 1991. With the collapse of the USSR and the aggressive communist policy, the need and justification for NATO became very weak. Yet, NATO continued and adopted a policy of cornering Russia. This is what the Russian leadership believes, not entirely unreasonable. This cornering policy began by expanding the membership of the European Union to the East European countries with the implicit intention they will be eventually inducted into NATO.
During the last three decades, the Russian leadership absorbed the shock of losing hegemonic status and regrouped itself to face the U.S.'s hegemonic politics. In this campaign, it has two weapons that it can use very effectively. First, its stock of nuclear weapons will deter any military maneuver that the U.S. might plan with the help of NATO. Second, Putin's other weapon is exporting natural gas and oil to Europe. In 2021, Russia met Europe's 40% total gas consumption. More specifically, Germany's dependence on Russian gas was as high as 65%. The following 2020 figures (%) indicate the nature of the dependence of four E.U. countries on the Russian oil and petroleum products: Finland 69%; Germany 30%; France 13%; and the U.K. 12%. Thus, U.S.'s closest military allies can help it politically or diplomatically.
The above information suggests that a political solution orchestrated by the NATO leadership is a far cry. In 1971, India helped us to find relief from the atrocities perpetrated by Yahya and his political allies in both West and East Pakistan. India's help was made feasible by its military and political alliance with the USSR. There is no such possibility in the case of Ukraine.
Then we overlook the game that Chinese President Xi Jinping has been playing in this crisis. After Mao Zedong took over the leadership of the Chinese government, the country lost control over its two territories - Hong Kong and Taiwan. China regained control over Hong Kong when the treaty between the U.K. and the pre-communist Chinese ended. However, with the help of the U.S., Taiwan acted as a permanent member of the U.N. Security Council till 1971. The General Assembly, with its Resolution 2758, ended this crisis created by the U.S. and its allies by establishing the government of the People's Republic of China as the permanent member of the U.N. Security Council and sole member of the U.N.
Taiwan formed an independent state within the Chinese territory in 1949 and has retained this status with the help of the U.S. One should not be surprised that Putin's success in Ukraine would encourage the Chinese government to claim back its territory by repeating his tactics? And in this case, the Chinese government has both political legitimacy and economic and political power.
This is the international political situation in which the Ukraine crisis deserves to be discussed. There is little hope that this Ukrainian crisis would end through diplomatic processes under the auspices of the U.N.
In this situation, the only hope is the international public protest. Public demonstrations, organized internationally, could put pressure on Putin back out of this aggressive military campaign. He must know that the international community condemns his barbaric statesmanship.
Guelph, Ontario, Canada. Khandakar Qudrat-I Elahi is a formal faculty of the Department of Agricultural Finance, Bangladesh Agricultural University
[email protected]

How to minimise costs and maximise benefits

Important to know when one has to call it a day

The attention it requires

The miracle baby deserves all the cares she needs

An introduction to Bangladesh's energy sector

In love with rooftop gardens