Shelaidaha Creating the ambience of Shantiniketan in Bangladesh 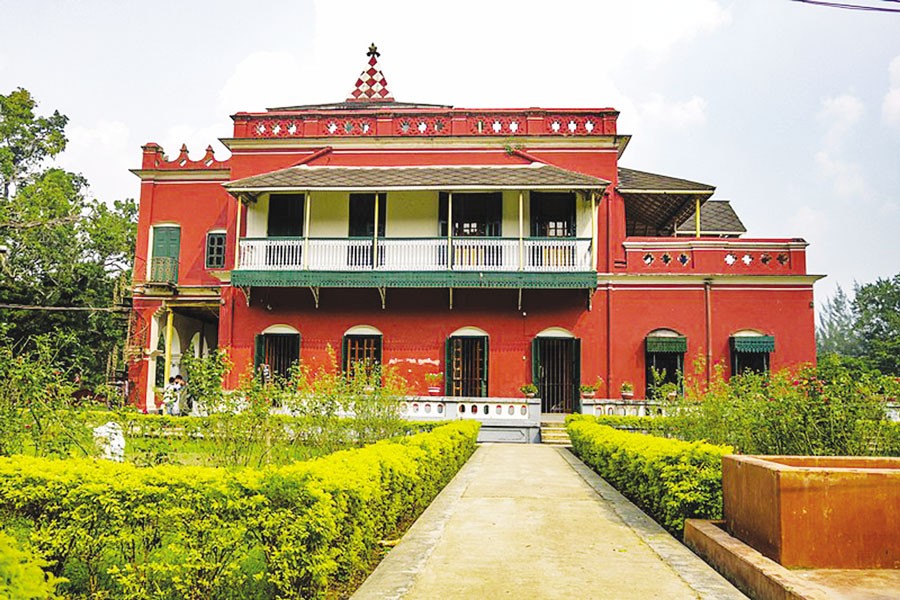 Shelaidaha derives its name from two words: Sheli and Daha. Mr. Sheli, an Englishman, used to reside in the area. He was, in fact, an indigo planter whose Nilkuti had been washed away by the river Padma. Daha means a pool of water. The name of the village, therefore, means a pool of water. The name of the village was thus formed. Two tombs on the grave of two members of Mr. Sheli's family were also washed away by the erosion caused by the river. In fact, there was a saying that Mr. Sheli was a ruthless Indigo planter in the area. The River Padma does not exist near Shelaidah any more when Rabidranath Tagore used to live there.
The Nobel laureate poet, writer and singer, Rabindranath Tagore, had spent time in Shelaidaha from 1891 to 1901 as written by Krishna Dutta and Andrew Robinson in 1995.
It seems interesting to know why on earth Rabindranath went to Shelaidaha. Since his grandfather Dhark Nath Tagore got zamindary of Nator raj in an auction in 1800. The area of this estate was spread over an wide area from Patisar of Rajshahi, Shahjadpur of Pabna and Birahimpur of Nadia district. Since his other brothers are not interested to look after zamindary his Father Debendra Nath Tagore assigned Rabindranath Tagore to look after estates. Therefore, he was assigned to look after zamindary of his father in 1891. Of the entire area of estates, Kutibhari of Shilaidaha was the only brick-built house. Existing kuthibari of Shilaidaha where Rabindranath Tagore had spent best part of his life was rebuilt by Rabindranath Tagore after dismantling the one built by an indigo planter when old kutibhari was about to be eroded by mighty waves of the Padma. The elegant three-storey building Kuthibari stands in the middle of a large courtyard which includes two tanks, a mango orchard and a host of other blossoming trees. The building has seventeen rooms while Rabindranath Tagore used a room on the third floor for his creative writings. From this room one could used to watch fury of the Padma and the Gorai, by the side of which Kushtia town was situated. Incidentally, Rabindranath Tagore himself planted Bukul trees on two sides of a brick-made bathing place. Now neither Padma nor Gorai exist in Shelaidaha. The river Padma was a source of inspiration for Rabindranath Tagore. It inspired his contribution to Bengali literature. According to Krishna Dutta and Andrew Robinson, Rabindranath wrote fifty-nine short stories. Edward Thomson, having translated a number of them, was convinced that they were among the world's great short stories. Now the Padma is practically dead on this side. This writer quotes from Sonar Tori written in Shelaidah:
Clouds are roaring and thundering in the sky
Full of rainy season,
Musing and meditating alone on the bank
Full of despair
Shelaidaha years were found in poems, songs, plays, musical dramas and plays. During the period of administration of Rabindranath Tagore Shelaidaha looked vibrant and young because of the hub-bub of the two mighty rivers. Shelaidaha estate in fact went to Surendranath Tagore in 1922 following apportionment of the asset of Tagore family but Rabindranath Tagore paid a few visits to Shelaidaha after division and he decided to stay in Zorashako, but Rabindranath Tagore felt pangs of separation from Shelaidaha. Following his last visit to Shelaidaha Rabindranath is reported to have written that Padma had divorced him.
As a matter of fact Rabindranath Tagore was invited by the sponsors of the Bengal Rural Literature Conference which was held in March, 1940 at Shelaidaha. Munshi Nooruddin Ahmed who was the Chairman of Shelaidaha union council was one of the sponsors of the conference. Incidentally, late Nooruddin Ahmed was my fufah, who served Shelaidaha union council for twenty years and Vice-Chairman of Kushtia district board for four years. As vice-chairman of the district board he wrote a letter to the government of East Pakistan to make Kuthibari a national asset to preserve the memory of Rabindranath Tagore. Chief Minister of East Pakistan Ataur Rahman Khan declared it a protected monument under the Ancient Monument Act of 1904 on the basis of the report submitted by late Ekramul Haq, senior information officer of East Pakistan. Incidentally Ekramul Haq expired on 4 November, 1991. He was also related to this writer. There is enough space on the other side of Kuthibari where a university could be established.

The festival of Poush Sankranti is on its way out

Open Community Spaces The winds of change in Dhaka

The discourse over democracy