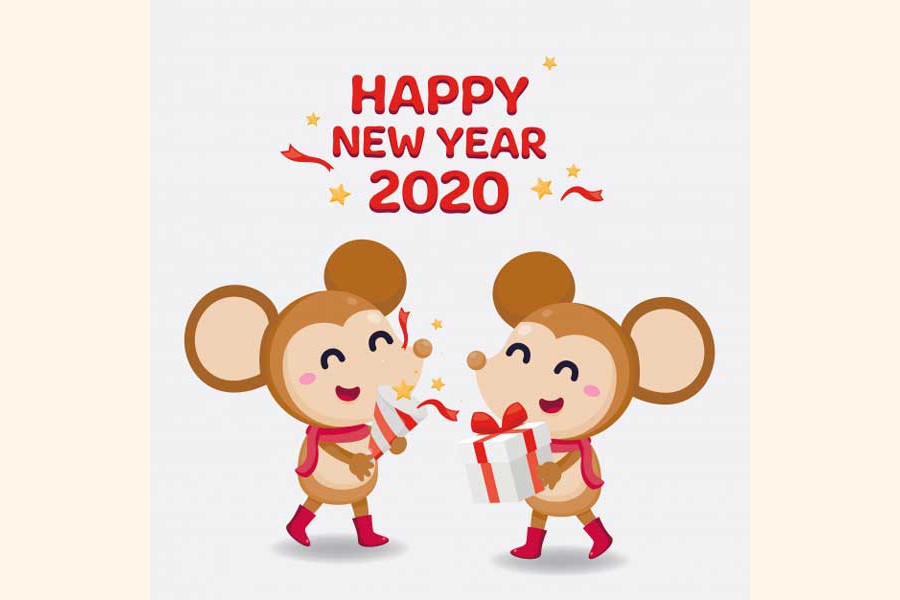 Almost all people have their special fond wishes for the New Year. Even a child treasures in his/her small bosom a dream to be realised -one that eluded him or her before-in the year beckoning on the horizon. Everyone also draws schemes to fulfil the cherished wishes. A child may frantically look for a sought-after toy, a teenager a fancied smartphone, an executive either a fatter pay package or a latest model car and so on and so forth. But what about the non-descript average poor people's wishes for the New Year?

People who work on agricultural farms, in fish enclosures, poultry farms, vegetable or fruit gardens or in factories and at markets or bus or launch terminals as porters and pull rickshaws or vans surely harbour wishes to improve their financial status and lead a better life. Most people look for a new beginning in the New Year. But the humble souls have modest expectations and if some of those are realised they thank their stars.

The problem is with the educated and of course the privileged class of people. Theirs are the mega wishes and expectations. Among the members of this class more equal than the rest, the competition for wealth acquisition is intense. Their possessive instinct is insatiable. It is further fuelled by their spouses who are mostly used to throwing tantrums whenever their husbands fail to match the possession of the latest eye-catching gadgets and the life-style enhancing luxuries. The end result of the constant incitement is involvement in malpractices for wealth accumulation.

Not all are supposed to be satisfied with the Gandhian ideology of living with as little material possession as possible. Even his frugal food intake is exemplary. But there should be a limit to luxury and consumerism. Consumerism is fuelled by glitzy advertisements where mostly female body is used -rather abused -alluringly. Where such tricks are not useful, other methods bordering on falsehood are exploited to realise the goal. The ethical considerations become a casualty. Ads on some baby or child formula foods and drinks make outrageous claims, particularly in developing countries. Or, how can ads on such drinks constantly bombard on TV screen that intake of the drink help growth at double the normal rate or by such and such centimetres above the normal growth? Is not normal growth enough? In the developed Western countries such ads are a sacrilege. It is impossible to make unsubstantial claims through ads for promotion of consumer goods, foods and beverages.

Ads are responsible for stoking appetite for possessing the impossible. Honest labour does not often earn enough for people even to lead a decent life. When conglomerates and multinational companies establish a monopoly in sale of their commodities, they make a hefty profit on their goods. That the profit is mostly disproportionate to the payment of the workers needs little elaboration. Thus the class of superrich has emerged whose wishes and expectations know no bounds.

True, some of the world's richest people have volunteered to donate a substantial portion of their wealth for the welfare of the wretched and the poor all across the world. Warren Buffet and Bill Gates have already contributed huge amounts to accomplish some wonderful programmes benefiting people in the Third World.

Not all people need to practice charity on such a scale. Even small contribution to the cause of humanity can work wonder. What is needed is a warm heart that melts for the needy. If the rich take responsibility of a poor but meritorious student or a family becoming pauper on account of river erosion or other natural calamity, this country can get over poverty in double quick time. Even people of the modestly affluent class can change society better through their contribution to a collective fund. This country is poised to qualify as a lower middle-income country by 2023. Before that deadline, such social commitments can be given an institutional shape for eradication of poverty from this land.

Alongside wishing for accumulating more material possessions, the rich and the affluent of society can take small vows to see smiles on a poor boy's lips or pull a poor family out of the poverty trap. Such acts of charity will bring them heavenly joy. They will savour the delight of doing a world of good to fellow human beings.

The impact on Bangladesh's exports