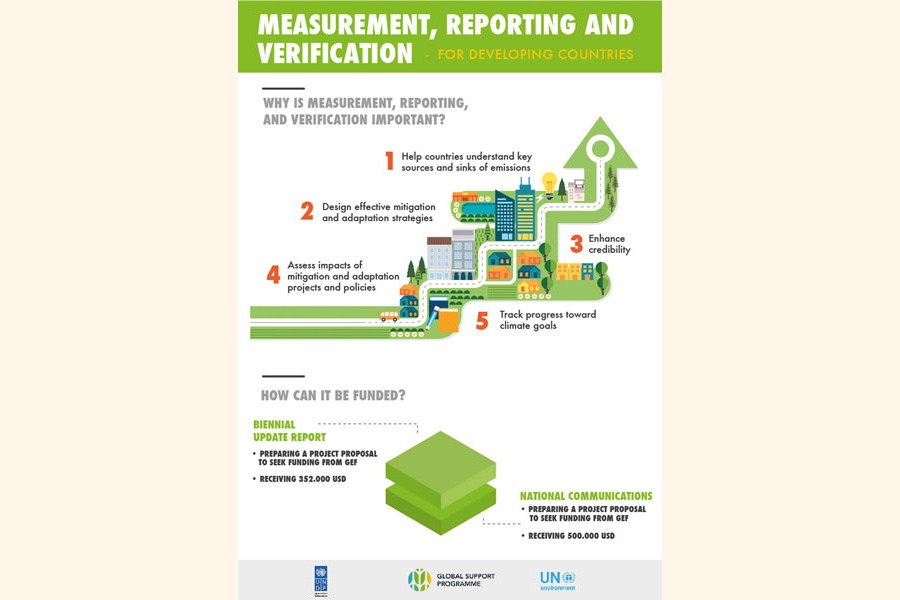 WHY MRV: MRV is vital in two areas: (1) mitigation, and (2) climate finance. Independent review and monitoring of the emission reductions achieved under Article 6(4) of the Paris Agreement is referred to as verification. MRV systems are used extensively in carbon pricing mechanism and trading schemes worldwide.

In order to reduce the adverse effects of climate change, it is necessary to reduce emission of GHG. In the Paris Agreement, there are obligations requiring parties to reduce carbon emissions. Article13 of the Agreement calls for reporting of information on GHG emissions by sources and removals as well as on the actions taken by the Parties to mitigate and adapt climate change. .

Under the UNFCCC, the international framework was developed for a structured approach to measurement, reporting and, and after COP 13 (Bali 2007) also to verification. Parties adopted a number of decisions elaborating guidance, among others, on the content and frequency of national communications, biennial update reports (BURs) and domestic frameworks for measurement, reporting and verification (MRV).

The Bali Action Plan introduced the principle of MRV for both developed and developing country Parties in the context of international and domestic efforts to mitigate climate change. For developing country Parties, the existing MRV framework encompasses submitting national communications every four years and biennial update reports (BURs) every two years. Among others, it also contains provisions for undergoing international consultation and analysis (ICA), setting up domestic MRV of domestically supported mitigation actions

TYPES OF MRV: MRV may be national or international. MRV is also applicable for Reducing Emissions from Deforestation and Forest Degradation (REDD-plus MRV (decision 14/CP.19). Financial incentives are made for the amount of reported and verified GHG emissions including carbon dioxide (CO2) reduction. This is applicable only for those developing country Parties seeking to obtain and receive results-based finance for outcomes from the implementation of REDD+ activities.

In other words, results-based actions need to be fully measured, reported and verified (MRV).

The MRV for REDD+ activities entails a two-step process:

- Second, the actual results compared to the assessed FREL are submitted in a technical annex to the biennial update report (BUR) of a developing country Party seeking to obtain and receive payments for results-based actions. These results undergo a separate technical analysis. The assessment team undertaking the technical analysis check will be composed of land use, land-use change and forestry (LULUCF) experts selected from the UNFCCC roster of experts. The assessment team check whether data and information provided in the technical annex are transparent, consistent, complete and accurate consistent with the assessed FREL and guidelines for technical annexes with REDD+ results. The team also analyses if the results are accurate, to the extent possible. (Decision 14/CP.19 in FCCC/CP/2013/10/Add.1).

Measurement (for non-Annex I Parties) is applicable to efforts to address climate change and to the impacts of these efforts, including the level of GHG emissions by sources and removals by sinks, reductions of emissions and other co-benefits. Such measurement occurs at the national level (UNFCCC, 2014).The measurement results are subsequently reported in national communications. According to the decisions adopted at the COP 16 and 17, non-Annex I Parties need to measure the specific effects of national mitigation actions as well as the support needed and received, and to convey this information, including a national inventory report, as part of their BURs. In order to report to the UNFCCC, certain climate change related data such as GHG inventories have to be measured. And a country has to conduct regular international reporting e.g., submit National Communications (NCs).

Monitoring and evaluation (M&E) is mainly used (not MRV) for climate change adaptation projects. Article 7(9) (d) of the Paris Agreement mandates the countries to monitor, evaluate and learn from adaptation plans, policies, programmes and actions. Countries use M&E approaches to assess adaptation policies, plans and report on national adaptation performance. The lack of a common metrics for adaptation results adds another layer to the complexity involved in ME of adaptation projects.

REPORTING: Reporting for non-Annex I Parties is implemented through the National Communications and Biennial Update Reports (BURs). Reporting is usually done on GHG emissions and removals by sinks, progress with implementation of the mitigation actions, constraints and gaps, support needed and received, and other relevant information.

VERIFICATION. Verification is a process to increase the transparency of mitigation actions and their effects, and support needed and received. Verification, at the international level, is done through International Consultation and Analysis (ICA) of BURs. The ICA process consists of two steps, which are triggered by the submission of BURs from developing country parties: A technical analysis of BUR by a team of experts and a facilitative sharing of views in the form of workshop. The ICA process provides learning opportunity for Parties and stakeholders to better prepare for the Enhanced Transparency Framework (ETF).National communications are not subject to ICA.  At the national level, verification is implemented through domestic MRV mechanisms to be established by non-Annex I Parties as per the general guidelines adopted at COP 19 in 2013.

MRV FOR CLIMATE FINANCE: Although MRV is mainly used for GHG emission, it is also important for climate finance elements  to meet the information requirements of the UNFCCC and the Paris Agreement, inform donors/development partners on how their funds are used, and to inform policy makers on the effectiveness of expenditure and investments in climate change priorities. A Climate Finance MRV system is critical to generate a positive dynamism in attracting increasing flows of financing, using it efficiently to mitigate and adapt to climate change.

MEASUREMENT. For climate finance, Measurement is necessary for estimating the funds allocated, received, and mobilised for climate change purpose (i.e., for mitigation and adaptation actions) from a variety of financial sources (i.e., public and private, national and international). OECD methodology (Rio Markers) and Climate Public Expenditure and Institutional Review (CPEIR) are usually used in the absence of an official methodology.

In Rio Markers, ascoring system of three values is used as:

(i) a principal objective (score "2"):  An activity can be marked as principal when the objective (climate change mitigation or adaptation) is explicitly stated as fundamental in the design of, or the motivation for, the activity.

(ii) a significant objective (score "1"): An activity can be marked as significant when the objective (climate change mitigation or adaptation) is explicitly stated but it is not the fundamental driver or motivation for undertaking the activity; or

(iii) not targeting the Convention (score "0"):  The score "0" means that the activity was examined but found not to target the objective (climate change mitigation or adaptation) in any significant way.

An activity may target multiple objectives and qualify for more than one Rio marker. For example, a sustainable forest management project can contribute to biodiversity conservation, to capturing carbon (mitigation) and to reducing climate risk (adaptation).To avoid double or triple-counting the same activity, aggregate figures for biodiversity, climate change mitigation, and climate change adaptation should not be added up (OECD, n.d.). Rio markers allow for an approximate quantification of development finance flows that target the Rio Convention objectives. These marks indicate the policy objectives of members' development finance activities.

In some cases, measurement becomes very difficult as there is no internationally agreed definition of what "new and additional" (in the case of climate finance) actually means. Similarly, there is a lack of provision as to how climate change funding is to be distinguished from development assistance supports. Numerous entities receiving climate finance at national level (public entities, private entities and NGOs).  It is a challenge to track all finances received by such numerous entities in the absence of a centralized system to track and report climate finance.

Bangladesh is yet to set up climate change MRV. Bangladesh needs national MRV to ensure value for money that we spend on projects under Climate Change Trust fund.

However, Bangladesh makes assessment of GHG emissions and GHG inventory by hiring experts from BUET, BIDS and other sources. Consultants, research institutions, universities, and statistical agencies may all support the measurement and reporting process. Domestic experts, certification bodies, and international experts usually carry out verification functions (at national level)

As climate change is a common concern of humankind, it is necessary to have an MRV in place to measure, report and verify progress on climate actions to reduce GHG emissions, and build resilience. It also helps to report on the use and effectiveness of climate change finance. The expenditure for an MRV system is to be seen as an investment, which is intended to achieve the highest possible return in the form of result-based payments (Kohl, Neupane &Mundhenk, 2020).

MRV system has to be simplified and streamlined for adequate participation of developing countries in carbon markets. To set up an MRV system for climate change, it is necessary to have a dedicated team. The team must combine Finance, IT, Communications and Climate Change Economics profiles. Further, the development of the MRV for climate change must be seen as a process of continuous and incremental improvement. We might also think and find plausible ways to differentiate ODA sources from climate-related finance in our MRV system (when it will be developed).

Dr. Mohammad Abu Yusuf, Joint Secretary, Finance Division, MoF. [email protected]
The opinions expressed in this paper are his own, and in no way reflect the views of the office he works for.

Return of Hemanta with all its attributes

Primates and other species also need space for survival

Of thieves in time of an unprecedented crisis

Shelaidaha Creating the ambience of Shantiniketan in Bangladesh