Circumstances are most unusual but helpline 999 proves handy 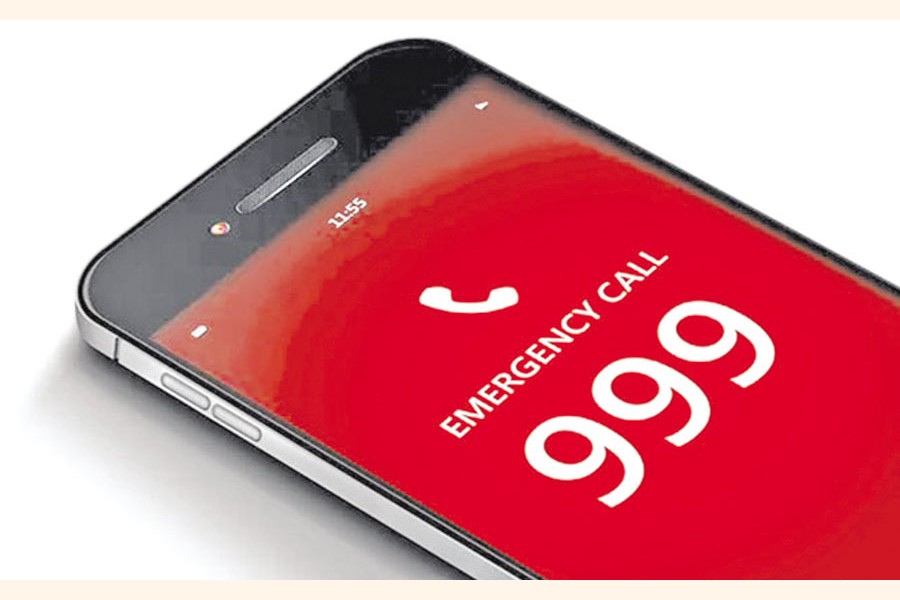 "Hello, is it 999?" "Yes, how can I help you?"--comes the prompt reply from the national helpline. "I am in great danger, can't get out of a shop. Need your help immediately or else I fear for my life".
Following similar but not word for word exchanges, a rescue team of the police rushed to the spot, a grocery shop in Barishal city. Many thoughts crossed the law enforcers' minds. How can a man be in danger in a grocery? Can it be that someone has been held there hostage for ransom? Or, the grocery owner is under attack? Are robbers trying to storm into his shop? Even the owner could be caught in a bizarre accident within the shop. The possibilities were countless.
But to a lifetime's surprise of the rescue team, the man who sent them the SOS was a burglar---in fact a professional thief. The uninvited nightly guest broke into the grocery for accomplishing what his kind is always on the lookout to do. On that particular night, he was a bit tardy in completing his mission and he suddenly discovered that dawn had broken before he could come out of the shop with his spoils.
People were on the street by the time and he had no way of escaping unnoticed. The housebreaker in this case 'shopbreaker' panicked. Once caught, he would be subjected to mob lynching. The thief panicked but did not lose his head. He might have toyed with the various options open to him. Finally he arrived at the well-judged decision that it would be better not to give the gathering crowd any opportunity to pound his body to their satisfaction. It is the police who alone can save him from such physical battering.
He was right. By the time the owner of the grocery arrived to the spot, the police team was herding him out of the shop. The bystanders were definitely itching for delivering blows but for the law enforcement team. Sure enough, the burglar knew what will follow. Arrested on the spot for his crime, he was presented to a court which then sent him to jail. The pilferer avoided mob beating in preference for imprisonment.
Thieves are accustomed to taking spot decisions depending on the situation. Their intelligence quotient (IQ) is quite remarkable. Otherwise it is impossible for them to break into houses clandestinely. But a few of them are extraordinarily smart and go about with their ways in the most ingenious manner.
Burglary is a crime that is unlikely to carry a penalty of more than three years in prison. In this case, the theft has not been committed; at best it was an attempted theft. Moreover, the man surrendered to the police on his own. He may not have to languish in jail for long. What next?
Will he go back to his old profession? Is not it a collective failure on the part of society, the administration, law enforcement department and the justice system to give such criminals a taste of normal honest living? A person who has been saved from public lynching knows in the heart of his hearts that every time he will not be lucky like this. Whether this particular thief went through a lynching experience before is not known. But it is clear that even a criminal holds his life dear to him only more so in the face of possible danger.
So this is the feeling that should be cashed in on. But unfortunately, the concept of reform centre as against prison is yet to gain currency in countries like Bangladesh. In some of the Western countries, the traditional prisons have no place in their lexicon. They have taken the concept to a level where the cause behind a crime is analysed with maximum consideration. No person is born a criminal, only the circumstances compels one to get involved in crimes. An approach like this guides counsellors to deal with criminals. Even those who take care of them in the reform centres are trained to be compassionate towards the inmates.
The pictures of prisons that emerge from time to time here are not only deplorable but also very cruel and forbidding. In an environment like that even an uninitiated and innocent person will turn a vile person soon. There is no question of reforming character or habits in such hostile facilities. Thieves or criminals are destined to turn even the hardened of their types. But this situation must change in the interest of their families, society in general and the nation at large. It is a waste of human resource. The drive for rectification should begin from the point of outrageous discrimination and disparities that have riven society.

The festival of Poush Sankranti is on its way out

Open Community Spaces The winds of change in Dhaka

The discourse over democracy