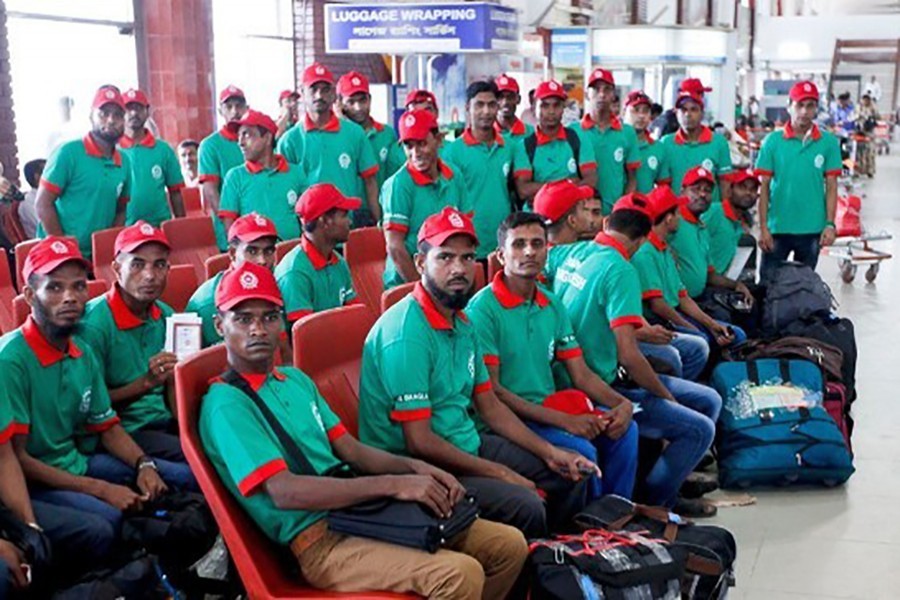 Bangladesh is the world's 6th largest manpower exporting country but it ranks 9th in terms of receiving remittances, the latest statistics show. The country has seen migration of around 12 million people with overseas jobs since the late 1970s, thanks to construction boomin the Middle East and higher labourdemand created by economic prosperity in Malaysia and Singapore.

Despite exporting a high number of workers, Bangladesh has failed to earn higher amount of remittances and ensure better welfare and protection for its expatriates since the country is still lagging behind in building quality manpower.The country is also facing the challenge of continuing outflow of workers in the coming days as the demand for unskilled workers is decreasing in most of their traditional destinations.

In such a context, the authorities concerned have planned to send abroad 50 per cent skilled workers by 2021, setting a target of exporting hundred per cent skilled manpower by 2030. But how is it possible to attain such a target?

Experts and stakeholders emphasise a comprehensive plan for turning the workforce into skilled one. However, they caution, if most of the workers are provided with skills in different trades that lack market demand, training may not help the workers to get jobs abroad.

Unfortunately, there is no effective and standard training module and upgraded equipment in domestic training centres. Workers get training on about 45 trades at the 71 Technical Training Centres (TTCs) operationalacross the country under the supervision of the BMET.

The workers can hardly gather necessary experiences about working conditions, heath matters or cultural issues through pre-departure training, stakeholdersallege. So, the workers most of the time cannot find matching of their trainings with jobs in destination countries. The 30-day housekeeping training, provided to women seeking jobs of domestic help abroad, is found to be 'absolutely good for nothing' as it is alleged by many.

So, the country could not increase the outflow of skilled workers when the demand for lessskilled workers is declining in manpower receiving countries, including those of the Middle East, which isa major concentration of unskilled or less skilled Bangladeshi workers. Bangladesh sends workers mainly to 20 destinations.

Bangladeshi workers remitted $15.9 billion in 2018. In South Asia, India earned remittances amounting to $79.5 billion and Pakistan $20.9 billion in the year, according to a World Bank report. Historically, remittances cushionthe deficit Bangladesh has in its foreign trade.

Already, various reports indicate, crisis of jobs as well as safe and sound stay of the Bangladeshi expatriates has been acute in the Middle East and also to some extent in Malaysia in recent times.Many workers were deported from the Persian Gulf countries and statistics of BRAC's migration programme show that nearly 30,000 Bangladeshi workers were deported from different countries - some 21,000 from Saudi Arabia alone - between January and October this year. Bangladeshi workers were also sent back by the United Arab Emirates (UAE), Oman, Qatar,the Maldives and Malaysia.

Overall, the BMET data confirm, the country's overseas jobs declined by more than 15 per cent in nine months of the current year compared to the corresponding period of the previous year. A total of 469,275 Bangladeshis went abroad with jobs in nine months of 2019 compared to outbound migration of 555,393 workers in the same period of 2018.

Saudi Arabia is still the largest employer of Bangladeshi workers. But, the kingdom, now undergoing changes in its development process apart from facing economic challenges, announced that it will stop taking less skilled foreign workers by 2030. The deportation of foreign workers is just prelude to the country's future policy towards foreign workers.

Prospect of sending unskilled or semi-skilled manpower from Bangladeshto many other destinations looks bleak. "So, the authorities concerned have the only option of preparing a comprehensive policy package to create required skilled workforce to stay competitive in the global job market,"Shakirul Islam insisted.

Employing countries generally hire skilled workers without any migration fees. Migration cost for unskilled or less skilled workers remains high while they face exploitation by both middlemen and employers. But in case of skilled workers, the employers often pay one month's salary in advance for hiring them.

"Only Bangladeshi workers pay high migration cost to go to another country with jobs as they have no working experience in general," Abu Hayat, a Malaysia-based freelance researcher, told this author. He regretted that Bangladeshi workers draw lower wages and work in inhuman conditions and often fall victims of abuse and human trafficking since they are hired for "odd jobs".

Underlining the importance of skills these days, Mr Hayat cited an example that some renowned brands like Samsung hire skilled workers from Nepali offering even one-month pay in advance for taking them to Malaysia without any cost."If Bangladesh can create such demand by developing skilled manpower, the workers and the country would equally benefit," he said adding that there is massive scope for securing jobs by skilled workers in Malaysia.

Lack of demand-based training for female workers is another reason for exploitation and abuse of the Bangladesh women workers employed as domestic helps in the Middle East countries where they proved to be more vulnerable.

Interviews with female workers suggest that they could neither comprehend training before their departure nor have they been taught how to protect them on foreign land.

Are man and animals on a collision course?