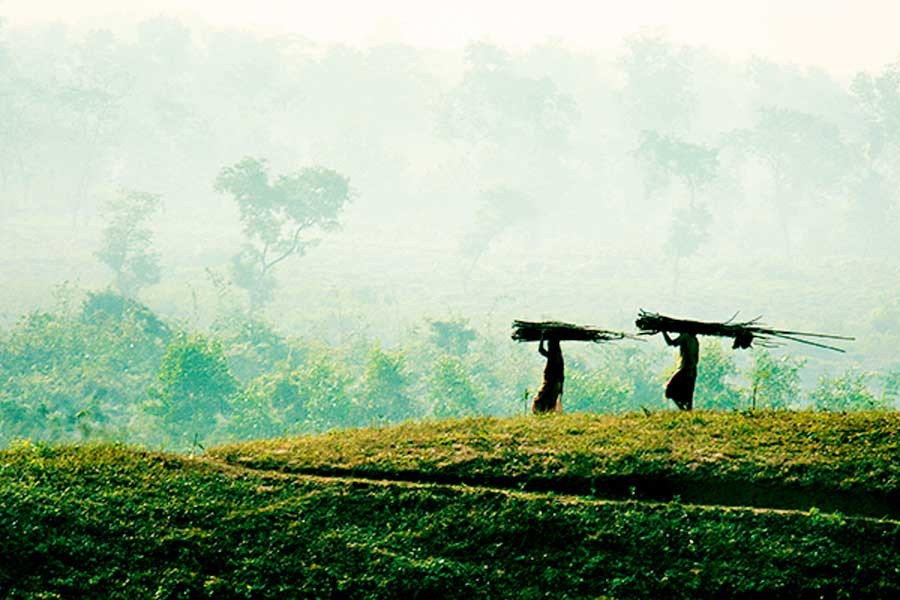 Development activities of Bangladesh have gained tremendous momentum in the last decade. The indicators of an exceptionally strong development record have inspired the country to aim even higher. The country now aspires to reach the upper middle income status by 2031 and developed country status by 2041. At present the country is implementing its Seventh Five-Year Plan (SFYP) with the expectation to realise its Vision 2021. SFYP is also aligned with the Sustainable Development Goals (SDGs), the Perspective Plan (2010-2021) and Bangladesh Delta Plan 2100.

Bangladesh is experiencing nearly 8.0 per cent gross domestic product (GDP) growth and is one of the fastest growing economies in the world. Bangladesh touched a milestone by attaining the status of a lower middle-income county in 2015 and becoming a developing country by 2024. The economy achieved over 7.0 per cent growth rate in 2016 breaking the trap of 6.0 per cent growth stagnation for over one and a half decade. The per capita income in FY2019 has increased to US$ 1909 from US$ 1751 in FY2018. Bangladesh is now 34th in the ranking of World Economic Forum's Inclusive Development Index, ahead of many developing countries (WEF 2018). By 2030, Bangladesh aspires to be the 24th largest economy in the world.

DEVELOPMENT PLANNING/ STRATEGY: Between FY1973 and FY2002, Bangladesh implemented five successive Five Year Plans and an interim Two Year Plan (1979-80). From FY2003 to FY2010, there was a shift from the five-year plan to a process of shorter term Poverty Reduction Strategy Paper (PRSP). Presently, the government has switched back to the five-year plan mechanism (2009) for transforming the economy.

FIRST PERSPECTIVE PLAN (2010-2021): The year 2008 is an important landmark in the planning history of Bangladesh as it was earmarked by the declaration of Vision 2021, a charter for moving towards a prosperous future. Vision 2021, through a full-blown Perspective Plan (2010-2021), laid down goals and strategies together with a framework for mobilising natural and human resources to achieve those goals. It called for socio-economic environment to be developed from a low-income economy to the first stage of a middle-income economy by 2021.

The Perspective Plan is scheduled to be implemented by two consecutive five-year plans namely the Sixth Five Year Plan (2011-2015) and the Seventh Five Year Plan (2016-2020). Since 2010, the year of commencement of the First Perspective Plan, the country has already attained the Lower-Middle-Income-Country status in 2015; gross domestic product (GDP) growth rate has crossed the milestone of eight per cent and has been indicating an accelerated growth path.

6TH FIVE YEAR PLAN (FY2011-FY2015): Implemented during July 2010-June 2015, the Sixth Five-Year-Plan (6th FYP) was the first of the two five-year plans that were launched to attain the government's Vision 2021 and the associated Perspective Plan FY10-FY21 (PP2021). The 6th FYP put accelerated growth with equity and social justice as the cornerstone of the underlying development strategy.

The link of the Plan to a Vision document (Vision 2021) and to a Perspective Plan (PP2021) was an innovative feature of the 6th FYP. Moving away from physical planning towards indicative planning was its another innovation to reflect that Bangladesh is primarily a private-sector led economy in which the government's role is to provide policy framework and support for growth and investment in areas that are complimentary to increasing the productivity of private investment and facilitating social development. A third innovative aspect of the 6th FYP was the adoption of a results-based framework for monitoring implementation and achieving concrete progress. Sixth Five Year Plan was the last quinquennium in implementing the MDGs. Bangladesh attained successes in 19 targets out of 21 MDG targets.

The 7th FYP centres on the following three themes:

* A broad-based strategy of inclusiveness with a view to empowering every citizen to participate by all and benefit from the development process.

* A sustainable development pathway that is resilient to disaster and climate change entails sustainable use of natural resources and successfully manages the inevitable transition to urbanisation.

SECOND PERSPECTIVE PLAN (2021-2041) – VISION 2041: The need for a new long-term plan around the end of the First Perspective Plan on October 20, 2015 prompted the National Economic Council (NEC) to take a decision to formulate the Second Perspective Plan. This is to be implemented from 2021 to 2041. This perspective plan has taken the Vision 2041, as declared by the Honourable Prime Minister, as its base to elaborate.

Vision 2041 seeks to eliminate extreme poverty and reach Upper Middle-Income Country (UMIC) status by 2031 and High-Income Country (HIC) status around 2041 with poverty becoming non-existent. To convert Vision 2041 into a development strategy, the government is formulating the Perspective Plan 2021-2041 (PP2041) with required policies and programmes. The PP2041 builds on the successes of PP2021, while also drawing on the good practice experiences of other UMICs and HICs that have already travelled the development path that Bangladesh is endeavouring to cross. Eighth Five Year Plan would be the first plan to initiate implementing of PP2041.

IMPLEMENTATION OF THE 2030 AGENDA: Bangladesh integrated Sustainable Development Goals (SDGs) into its 7th Five Year Plan (2016-2020). The country is apparently an early starter in implementation of SDGs. To spearhead the process, SDGs Implementation and Monitoring Committee has been formed at the Prime Minister's Office to facilitate the implementation of SDGs Action Plan. The General Economic Division (GED) of the Planning Commission serves as the focal point of the government for formulating SDGs implementation strategy and action plan for poverty eradication.

ALIGNMENT OF SDGS WITH 7TH FYP: Bangladesh emphasised SDGs while setting up the priority areas for 7th Five Year Plan (2016-20). A total of 14 goals (82 per cent) are found to be thematically fully aligned with the plan document and 3 goals (18 per cent) are partially aligned.

National priorities, according to the 7th Plan and SDGs taken together are as follows:

* Reduction in poverty and inequality across all groups and regions

* Ensuring the availability of safe drinking water and sanitation for all

* Ensuring sustainability in production, consumption, and use of energy and mineral resources

* Achieving gender equality and empowering all women and girls

* Preserving and preventing the environment from degradation, ensuring climate change adaptation and mitigation and disaster management

* Increasing access to digital communication through telephone and broadband services

IMPLEMENTATION PROGRESS OF 7TH FYP: One of the major targets of the 7th Plan is to break out of the sphere of 6.0 per cent growth rate and raise the annual average growth rate to 7.4 per cent. The target has been achieved in the last two subsequent fiscal years. Following are the areas where progress is above the target:

GDP growth surpassed the target in the last two years reaching 7.86 per cent in FY2018, while average target was to achieve 7.4 per cent growth rate.

* Public investment is filling the gap between private and well ahead of what was targeted.

* One of the major successes of this period is restricting inflation below 6.0 per cent.

* The number of students in TVET (Technical and Vocational Education and Training) system increased significantly (14 per cent), however, there is still a strong need for increased participation of girls.

BANGLADESH DELTA PLAN 2100 (BDP 2100): Bangladesh government approved the Bangladesh Delta Plan 2100 (BDP 2100) on September 04, 2018 with the objective of 'achieving Safe, Climate Resilient and Prosperous Delta'. In other words, BDP 2100 is the plan for moving Bangladesh forward for the next 100 years towards the 21st Century. BDP 2100 is indeed the combination of long-term strategies and subsequent interventions for ensuring long term water and food security, economic growth and environmental sustainability while effectively reducing vulnerability to natural disasters and building resilience to climate change and other delta challenges through robust, adaptive and integrated strategies, and equitable water governance.

In order to illustrate the role of BDP 2100 and its contribution to the long-term development of Bangladesh, two policy options are considered. One is called the Business As Usual (BAU) Policy Option (without BDP2100). Under this, there is a depiction of what will happen when the adverse impacts of the climate change increase-- the GDP growth rate starts to fall over time, efficiency of capital falls resulting in lower agricultural production, unemployment, migration and pressure on urbanisation will increase. On the other hand, the Delta Plan (DP) Policy Option incorporates the adoption of strong climate change and other delta-related adaptation measures to achieve higher and sustainable growth trajectories in the face of the various weather-related natural hazards and risks.

The BDP 2100 is essentially an adaptive techno-economic plan involving the interaction of water, land use, ecosystem and climate change with development outcomes. Hence, hydrology plays a major role in delineating the planning regions for the preparation of the BDP 2100. There are six "Hotspots" of BDP 2100 which are summarised below: