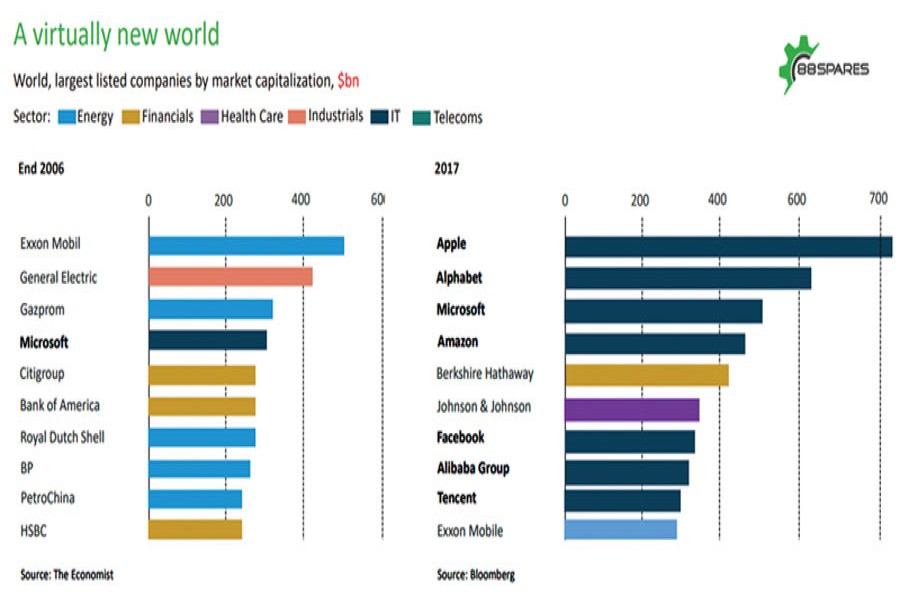 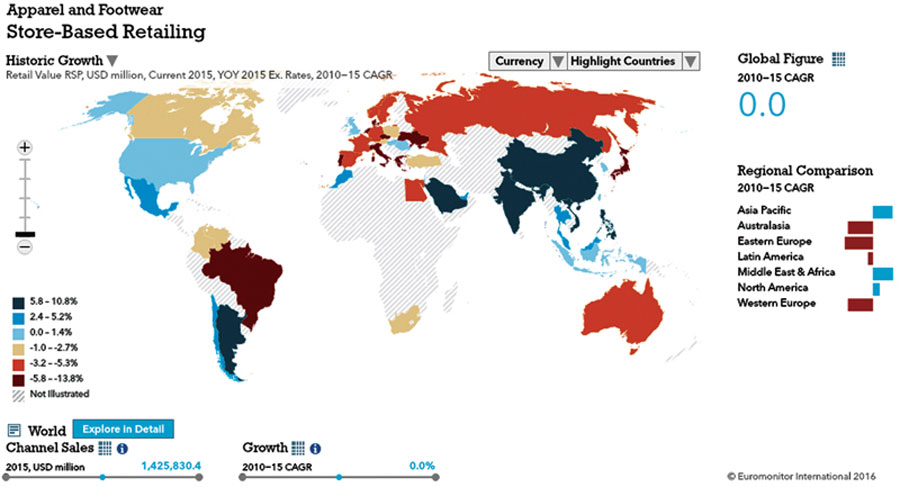 The world largest companies by market capitalisation in 2006 lost their leading position to the benefit on IT giants in 2017. The traditional industrial heavy weights, such as Exxon Mobile, General Electric, and Gazprom, started to be dwarfed by Apple, Alphabet, or Microsoft (see the figure). During the last 10 years, the knowledge industry has kicked in with a strong influence on all aspects of the world's industrial organisation. The last decade was especially characterised by turbulent times for traditional retail stores. Store-based retail companies engaged in very aggressive price strategies to compensate decreasing margins by increasing volumes, stopped expansion plans, closed shops, and cut off jobs.

Despite tremendous efforts to compete, traditional retailers have been replaced by new entrants, mirroring the world transition to information-based business models. For example, Amazon's market value was US$ 17.5 billion in 2006. This was a humble 8.0% of Walmart's value at the time. In 2016, Amazon's market value had grown to $351.8 billion, which represented 160% of Walmart's value the same year, no that humble of a figure anymore. In fact, while Walmart's value increased by 2.0% during that period, the value of its fairly new internet-based competitor increased by 1910%. The advent of e-commerce has happened while consumer habits were disrupting. At that time, the old giant's commercial strategies were rather detrimental to their growth and technological innovations were setting the path to a new future. Traditional retailing markets were glooming while internet retailing markets booming.

Store-based retailing: a glooming market: The share of all sales originated in stores has decreased from 95% in 2002 to 85% in 2016 (Euromonitor). That year, 61% of all stores were hosting apparel and footwear specialist retailers like H&M, Zara, or Uniqlo. Parallelly, the customer price index (CPI) in the clothing industry decreased 4.8% between 1996 and 2016. In 2015, the estimated worldwide size of store-based retailing market was $1.4 trillion. Between 2010 and 2015, this market strongly decreased in Brazil, some European countries, and Japan, while they strongly increased in Asia, Saudi Arabia, and Argentina. On average, store-based activities stagnated during these years. In addition, on average, the price of a pair of jeans went from $37 to $30, a decrease of 23%. A shirt went from $28 to $23, a 22% decrease.

The apparel industry survived because, in the meantime, the number of apparel units per capita increased from just about 11 pieces to just above 14 pieces a year. Margin contraction was partly compensated by increased volumes. The surplus was, however, mainly absorbed by another type of retailing model, the booming internet-based retailing market.

Internet-based retailing: a booming market: The internet retailing market for apparel and footwear has been growing all over the world at an average rate of growth of 24% during 2010 and 2015. This growth was driven by Asia, the middle east and, central and south America, with annual growth of over 100% in some cases. The developed western countries seem to be slow at changing their consumption habits. Indeed, half of internet retails sales are originated in Asia Pacific in 2016 (Euromonitor).

The internet based retailing market for apparel and footwear is relatively smaller than the store-based retailing market for the same products. However, it evolution shows clear signs of disruption in customer habits (the way consumers buy) and retailing strategies (the way retailers sell). Marked demographic changes and business norms explain part of this evolution. Experts cites the emerging middle class in many developing countries, the millennials' consumption, the convenience of using smart devices in purchasing actions, changes in supply chain and logistics (seamless shipping, delivery and returns), integrated in-store and online experiences, or payment through mobile applications. 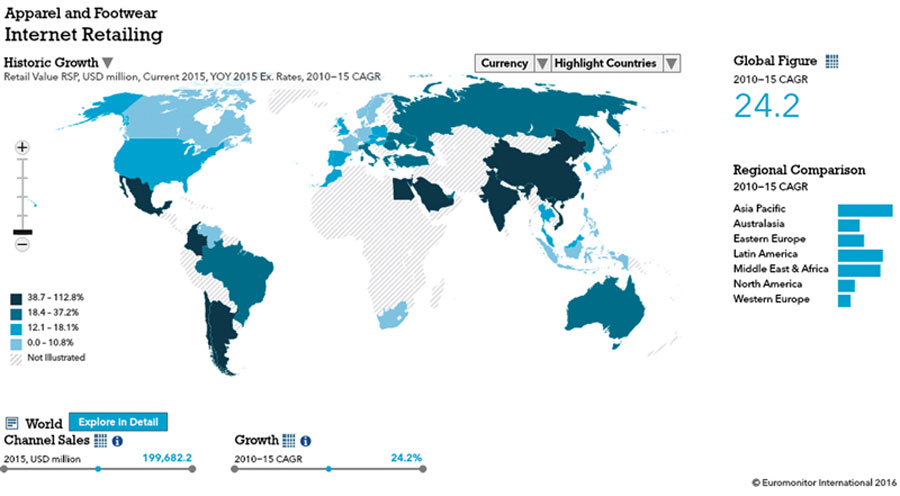 According to Euromonitor, the future growth of the apparel market is very highly correlated with current repartition of internet sales retailing. Moreover, the same countries that are driving internet sales retailing sector will be driving the apparel market growth between 2015 and 2020. This market is estimated to reach 1.3 trillion by 2020 and grow at an annual compound rate of 2.5%. While market increases are expected in Asia, the middle East, Argentina, and central and South America, it is expected from France, Germany, and Japan, to experience market contraction.

The future of retailing - bridging the online and traditional models: Walmart's 2.0% value growth between 2006 and 2016 is to be considered a success in the stored-based retailing market. Other traditional big players saw their value plunge during the same period. Internet retailing is a game changer, no question. Experts, however, say that the future of retail isn't in pure e-commerce alone, but rather in omni-channel solutions bringing technology in stores. The use of new and emerging technologies, such as virtual reality, has the opportunity to bridge the online and in-store gap for consumers. At the same time, improvements in supply chain and logistics infrastructure will fuel growth for retailers from the back end. Indeed, by combining technologies to influence buying and selling actions in the apparel industry, retailers do more than influencing customer habits. They see technology as a tool to transform the customer's experience.

Hence, as expressed by Jorge Martin from Euromonitor international, physical retailers remain the cornerstone of textile distribution, while its role is changing. "Putting the fun in functional" is key to keep customers engaged and entertained while being at the store and even beyond. Volume driven formats (i.e. off-price and fast-fashion) is good news for textile manufacturers within the low-price range/materials space. On their side, suppliers are now better able to connect directly with end-users and disintermediate the traditional retailing framework.