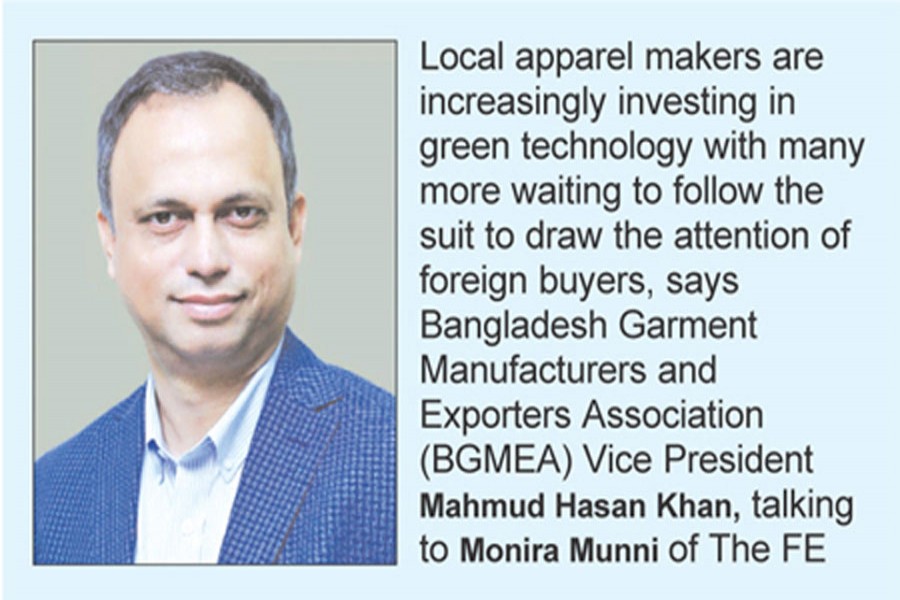 Local apparel makers are banking on green technology heavily in running their factory operation to brighten the image of the readymade garment sector and the country abroad after the recent industrial accidents.

They were investing on a large scale in adoption of the environment-friendly technology to shore up the reputation of the sector as well as the country, said Mahmud Hasan Khan, vice president of Bangladesh Garment Manufacturers and Exporters Association (BGMEA), talking to The FE.

Many others were weighing the option of going for such technology for the sake of their long-term sustainability and greater competitiveness on the global market, he said. A total of 67 local garment factories have so far achieved the USGBC 'LEED certificates' while more than 200 others are in the pipeline.

The Leadership in Energy and Environmental Design (LEED) certification from the US Green Building Council (USBC) is a point-based system, where a rating level is achieved once a project meets all the prerequisites and earns a minimum number of points. Depending on the number of points earned, a project may be labeled as LEED-certified, LEED Silver, LEED Gold or LEED Platinum.

"Those green units are characterising the sector and the country and also are helping attract more and new buyers, especially the medium ones," he said. Out of the 67, about 13 are LEED Platinum-rated factories, 20 are LEED Gold, 26 LEED Silver and the rest are only LEED-certified.
In Bangladesh, the first LEED Platinum-rated garment factory is Vintage Denim Studio, situated in the Ishwardy Export Processing Zone that produces only denim. It won the LEED certificate on May 30 2012.

Many of the medium-scale buyers have stores ranging from 200 to 300 across the globe and they also offer better prices for the locally-made apparel items. He expressed his hope that more such buyers would come to Bangladesh and the dependence on big buyers, who place orders on a large scale but offer less prices, would decline.

His group has so far invested Tk 1.20 billion in a project to set up an environment-friendly garment factory in a bid to bag the GSGBC LEED Gold certification. The factory-Mahmuda Attires Ltd- located in Dhamrai on seven bighas of land started its trial production three months back, he said. The annual production capacity of the unit is 0.1 million pieces of knitwear per day.
The workplace safety improved a lot following adoption of the ongoing programmes by three platforms-the Accord and Alliance representing the foreign buyers and the national initiative, the BGMEA leader claimed.

More than 80 per cent of the initially-inspected safety flaws have been remediated in about 2300 factories inspected by Accord and Alliance while the government has taken a move to accelerate the remediation process in about 800 other factories under the national initiative.
He believes that the Remediation Coordination Cell will be capable enough by the mid of 2018 to take over the job from the western retailers' platforms. He, however, opines that the highest level of remediation progress should be ensured as safety is a continuous process.

The proposed monitoring committee, set to comprise representatives from the government, the apparel sector, International Labour Organisation (ILO), brands and trade unions, would decide on the benchmark of the progress level in their first meeting scheduled to be held in January next. The committee will be formed soon, Mr Khan says. "To me, if 95 per cent remediation work is complete, it should be declared completed."

About the rights issues, he said the BGMEA recently requested the government to form a minimum wage board for the garment sector to review the wages of the workers.

To ensure labour rights, the government has taken so many steps, including amendment to the labour law, upgradation of the labour inspection directorate and labour directorate to full-fledged departments and recruitment of additional inspections, according to Mr Khan. The BGMEA also stepped up its vigilance, he said.