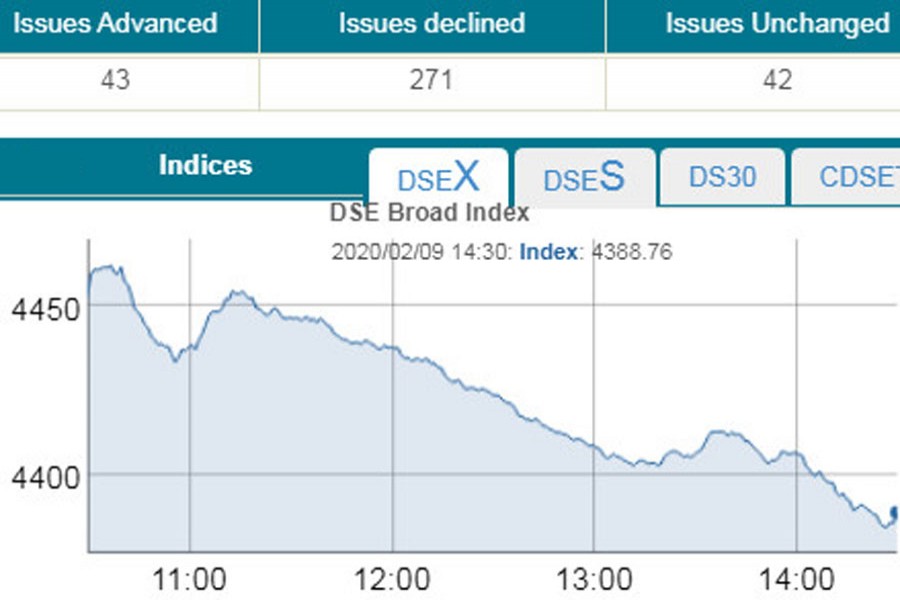 Market operators said the investors are struggling with ongoing volatile market while gloomy macroeconomic outlook and bill passed over depositing surplus money of state agencies to the national exchequer exacerbated the situation.

A bill to bring the surplus money of 61 state-owned and autonomous agencies to the national exchequer was passed in parliament on Wednesday.

Turnover, a crucial indicator of the market, also fell and amounted to 15-sesion low to Tk 3.62 billion, which was 3.72 per cent lower than the previous day’s turnover of Tk 3.76 billion.

Losers took a strong lead over the gainers as out of 356 issues traded, 271 closed lower, 43 ended higher and 42 remained unchanged on the DSE trading floor.

A total number of 121,475 trades were executed in the day’s trading session with trading volume of 133 million shares and mutual fund units.

Tosrifa Industries was the day’s best performer, posting a gain of 9.09 per cent while Delta Spinning Mills was the worst loser, losing 8.0 per cent.

The port city’s bourse, the Chittagong Stock Exchange, also ended lower with its All Shares Price Index (CASPI)—shedding 131 points to close at 13,411 and the Selective Categories Index - CSCX –losing 81 points to finish at 8,130.

Here too, the losers beat gainers, as 152 issues closed lower, 47 ended higher and 27 remained unchanged on the CSE.