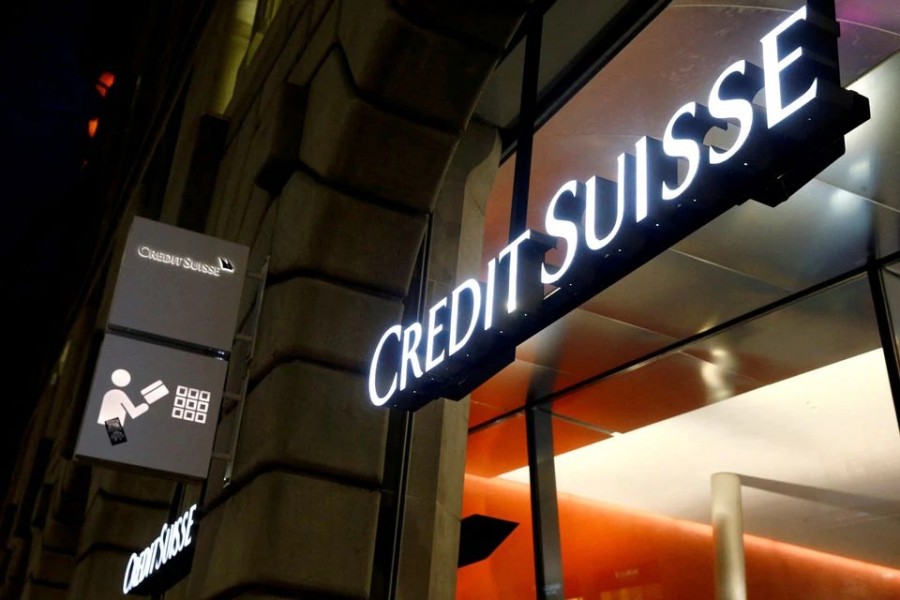 The logo of Swiss bank Credit Suisse is seen at a branch office in Zurich, Switzerland on November 3, 2021 — Reuters/Files

Weary Credit Suisse investors fear a long wait for the bank to get back on piste after a string of scandals which have wiped billions off its market value and piled pressure on management.

While Switzerland's second-largest bank says that it can create value by serving its wealthy clients with "care and entrepreneurial spirit", the market is not yet convinced and its share price has dropped by nearly a third in a year, knocking some 10 billion Swiss francs ($11 billion) off its valuation, reports Reuters.

Meanwhile, other big European banks, buoyed by the prospect of rising interest rates, have gained almost 50 per cent in stock market value over the same period and its cross-town Zurich rival UBS has left Credit Suisse for dust.

"Credit Suisse has a long list of scandals and problems," Stefan Sauerschell, a bond investor with Union Investment, said of the bank, which was founded in 1856 and says it has 48,770 employees and 3,510 relationship managers around the world.

"We always thought the management process would be improved and then the next punch landed. If there was another billion-plus loss, it would be a catastrophe," Sauerschell added.

Things did not get any better this week, however, when Credit Suisse reported a worse-than-expected $2.2 billion quarterly loss and warned of bleak prospects for 2022, when it said earnings would be hit by restructuring costs and pay.

That outlook knocked its already battered shares further, after a year when the bank racked up a 1.6 billion franc loss as a result of the collapse of $10 billion in supply chain finance funds linked to insolvent British finance firm Greensill and a $5.5 billion hit from the implosion of investment fund Archegos.

Proxy adviser Ethos was critical of Credit Suisse's decision not to publish its investigation into the Greensill affair.

"The bank should restore confidence with its shareholders and stakeholders by providing transparency on the roots and causes of the problems," Ethos's Vincent Kaufman said in an emailed response to Reuters.

Thomas Gottstein, who became Credit Suisse chief executive in 2020, said after the results this week that he was confident it was well positioned to grow and that risk management was at "the very core of its DNA".

Yet investors and analysts are not convinced, after hearing of a change in the way the bank pays its top staff, coupled with a tail-off in business and bleak prospects.

"They are in a very difficult situation. We've seen the problems with Greensill and other cases filter down to the business, slowing it down," Andreas Venditti, an analyst at Swiss bank Vontobel, said of Credit Suisse's predicament.

"At the same time, the bank has to pay up more cash to keep its staff. Although this might keep staff happy, the market does not like higher costs. And the outlook is subdued."

Although Credit Suisse pared back its bonus pool, it softened the blow for its own bankers by taking the unusual step of paying hundreds of millions in cash up front, while reducing the amount of shares it grants to them.

Senior bankers, who the bank said had taken a higher proportion of the bonus cut, received 799 million Swiss francs in cash payouts, up from just 59 million francs in 2020.

Moody's this week flagged concerns over a tailing off in money flowing into Credit Suisse, warning that it could drag down revenue and pointing to pressures on wealth management, restructuring costs and higher payouts to staff.

"We expect 2022 results to be weak," the credit ratings agency said, while Citigroup analysts said it was "hard to find any positives" in the most recent results, although they do see long-term value in Credit Suisse's shares.

The bank's past continues to haunt it, making it harder to repair an image which is critical to holding on to wealthy customers.

Its reputation is once again being put through the mill in the first criminal trial of a major bank in Switzerland, in which Credit Suisse and a former employee face charges of allowing an alleged Bulgarian cocaine trafficking gang to launder millions of euros, some of it stuffed into suitcases.

Credit Suisse has rejected all the allegations, while its employee denies wrongdoing.

The trial has attracted huge interest in Switzerland and more Credit Suisse representatives are due to give testimony, with investors keenly watching.

"They need to... make sure that they don't have any skeletons in the closet anymore," one analyst, who asked not to be named, said of what Credit Suisse must now do.

"They have moved themselves into a position where you don't give them the benefit of the doubt."