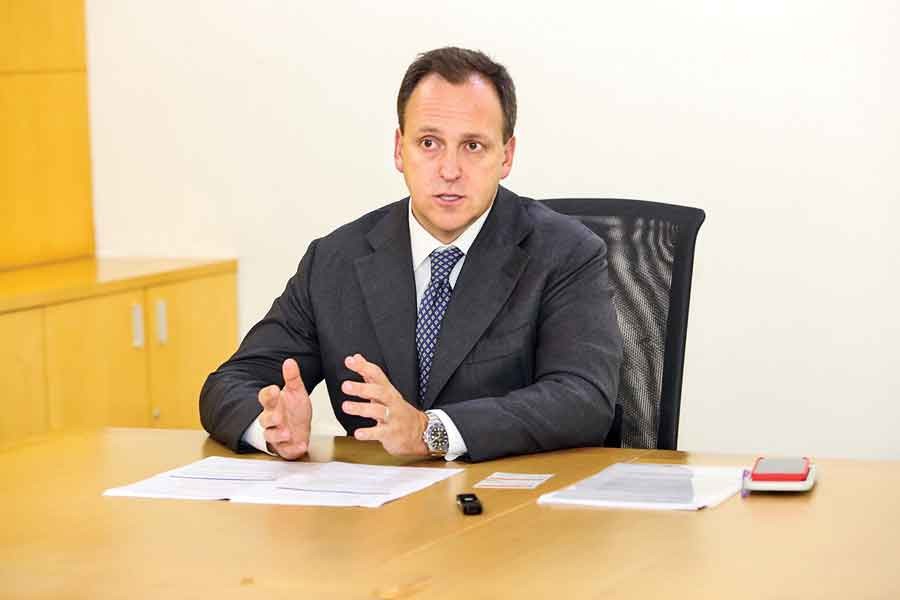 Bangladesh-which remains largely 'underinvested' by global investors, can attract more foreign investment in its infrastructure sector to feed the country's ongoing infrastructure demand, a leading global banker has said.
At the same time, the country needs to have a transparent issuance policy that allows further depth and breadth to the country's domestic bond market, the top banking executive has opined.
"When you look at the Bangladesh debt market, I think it is underinvested by foreign investors", according to Roberto Hoornweg, Global Head of Financial Markets of the international banking giant Standard Chartered.
"So, I feel that there is room for more foreign investors to come in- especially those who are long term debt and currency investors", Hoornweg, who was in Dhaka recently, said in an exclusive interview with the FE.
The Standard Chartered top boss also identified the country's nascent infrastructure sector as the perfect arena for drawing more overseas investment.
"I think, in the current environment, there would be good demand for infrastructure debt coming out of Bangladesh amongst global investors", Hoornweg said.
"Infrastructure is one area which generally generates a long term appetite for investment even in a rising interest rate environment. And here in Bangladesh, there is certainly a need for big infrastructure projects".
"If that can be married with funding that could come externally, I think that there is certainly an opportunity going forward", he added.
The StanChart high-up also underlined the need for a transparent issuance policy to ensure further depth in the country's domestic bond market.
"When a country is in a great situation with its Debt to GDP, it makes the government shy on the need for issuance", Hoornweg said.
"But I think the issuance of debt can be done either for the use of proceeds to grow for infrastructure but also to create more transparency and liquidity in the yield curve", he added.
Focusing on the areas for strengthening the country's financial market, Hoornweg also called for clear signaling on government bond yield curves.
"I think it is a big sign of strength when there is an auction process where the government signals to the market at the beginning of the year that how much it is going to issue and with what maturity", he said.
"To me, it is always good for the government to borrow even when it does not need the money. Because, when it needs the money, it is usually too late", Hoornweg added.
"Especially given the infrastructure spending or the infrastructure projects that will come to Bangladesh in the coming times, it probably would not be a bad idea", the StanChart top executive said.
Remittance sent by expatriates played a crucial role in Bangladesh's economic growth in recent decades. Lately however, there has been a dwindling trend in the inflow of remittance with migrant workers remitting nearly $12.77 billion in the last fiscal year, which is a six-year low.
Focusing on the issue, the veteran banker observed that if the government wants to increase the flow of remittance, it has to make the process of remitting easier and attractive by coming up with a variety of attractive savings instruments".
"Also, the cost of remittance does not need to be high-- because, the tools are there like electronic banking and all sorts of other processes to bring them down. And it is just about a willingness to bring them down", he added.
Almost ten years have passed since the financial crisis of 2007-08 rocked the global financial arena. Hoornweg however thinks that the event offers valuable lessons for the financial market worldwide.
"One good lesson from that financial crisis was that if there is no underlying need for a product that has no end user or end issuer or end hedger, it can be very dangerous", Hoorenwerg said.
"Secondly, I think, the financial crisis showed us that the lack of regulation can create unintended consequences that can have a domino effect", he added,
"Lastly, I think the investor and the individual knowledge have improved a lot since that debacle. Because obviously, part of the crisis was that a number of unsuitable products were being sold to individuals", StanChart boss pointed out.
"So, I think that having some clear set of rules for individuals takers of financial products have been a very good thing", he added.
Looking at the global scenario, the veteran banker also called for greater harmonization of regulations across the countries.
"One think I would like to see is to have global regulators being harmonized", Hoornwg said.
"Obviously, for global banks, it is a challenge when you have lots of trapped capital that are non-fundable across borders", he observed.
"And there may be an unintended consequence of balkanization of regulations because it does not help the corporate entities to grow globally", he added.
The Standard Chartered top boss -- who, in his long banking career, has also worked for Morgan Stanley for 17 years apart from entities like UBS Investment Bank in London, thinks that international rating agencies can play a very important role in promoting Bangladesh abroad.
"To foster the growth potential of its financial market, I would like to see Bangladesh having a hard currency curve", Hoornweg said.
"At the same time, international rating agencies can bring the Bangladesh story far more in the limelight of the foreign investors. Because, in my opinion, the country's success can be far better publicized", he added.