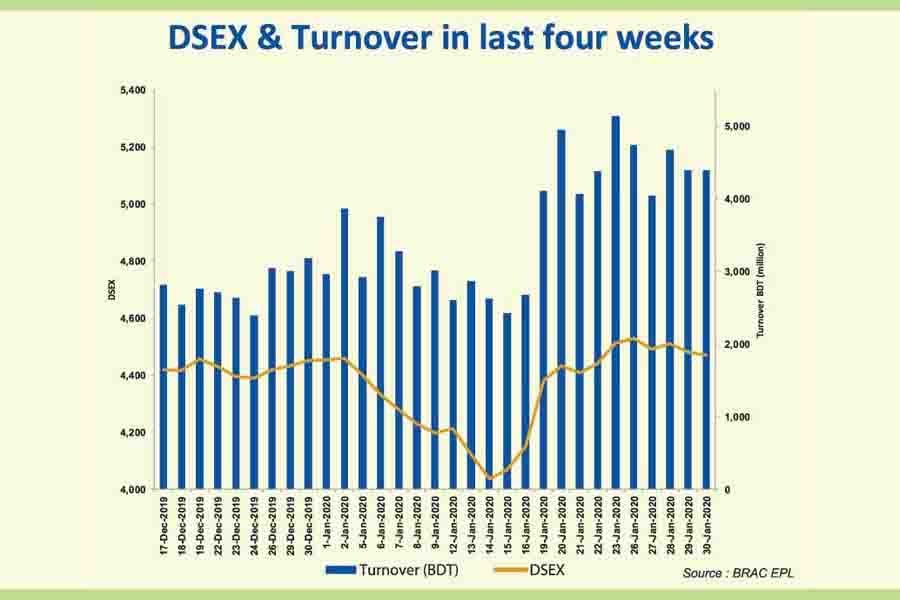 Stocks slipped into red in the outgoing week as investors sold shares amid the lower-than-expected earnings declared by large-cap companies.

Market analysts said disappointing earnings disclosures by a number of companies hit the investors' sentiment which prompted them for selling shares.

A merchant banker said earnings of most of the companies failed to meet investors' expectations. Consequently, investors liquidated their holdings which had an adverse effect on the index.

He noted that many investors also worried about the recent volatility of the market and maintained cautious stance while some rebalanced their portfolio based on quarterly earnings.

More than 100 companies declared October-December, 2019 quarter earnings during the week. Of them, 75 companies' earnings per share (EPS) declined during the period under review.

Among the large-cap companies, ACI took a big hit, as its consolidated EPS was Tk 12.20 in the negative for July-December 2019 as against Tk 0.05 for the same period last year.

The ACI informed that EPS was decreased due to increase of operating expenses and financial cost.

The Investment Corporation of Bangladesh also incurred loss of Tk 1.96 per share for July- December, 2019 with that of profit of Tk 0.57 per share in the same period in the previous year.

The ICB's share price plunged 12.51 per cent during the week to close at Tk 79 on Thursday.

"Such correction was triggered by investors booking quick-profit from last week's big surge and losing confidence after the discloser of negative or lower earnings growth," commented City Capital Resources.

The weekly total turnover on the DSE stood at Tk 22.25 billion, slightly down from Tk 22.65 billion in the week before.

The daily turnover averaged Tk 4.45 billion, down 1.78 per cent from the previous week's average of Tk 4.53 billion.

The non-bank financial institutions suffered most, losing 7.38 per cent, closely followed by telecom with 5.10 per cent, engineering 3.0 per cent, power 2.55 per cent and banking 1.80 per cent.

The market capitalisation of the DSE also fell 1.21 per cent to Tk 3,408 billion on Thursday, from Tk 3,450 billion in the previous week.

Losers outnumbered the gainers, as out of 358 issues traded, 218 closed lower and 118 ended higher while 22 issues remained unchanged on the DSE floor in the outgoing week.

LafargeHolcim dominated the week's turnover chart with shares worth Tk 1.88 billion changing hands during the week.

VFS Thread Dyeing was the week's best performer, posting a gain of 18.13 per cent while the Bangladesh Steel Re-rolling Mills was the worst loser, losing 13.22 per cent.

The Chittagong Stock Exchange (CSE), also ended lower, with its CSE All Share Price Index - CASPI - losing 158 points to settle at 13,586 and the Selective Categories Index - CSCX - shedding 102 points to close the week at 8,235.

Here too, the losers beat the gainers as 175 issues closed lower, 114 ended higher and 15 remained unchanged during the week.