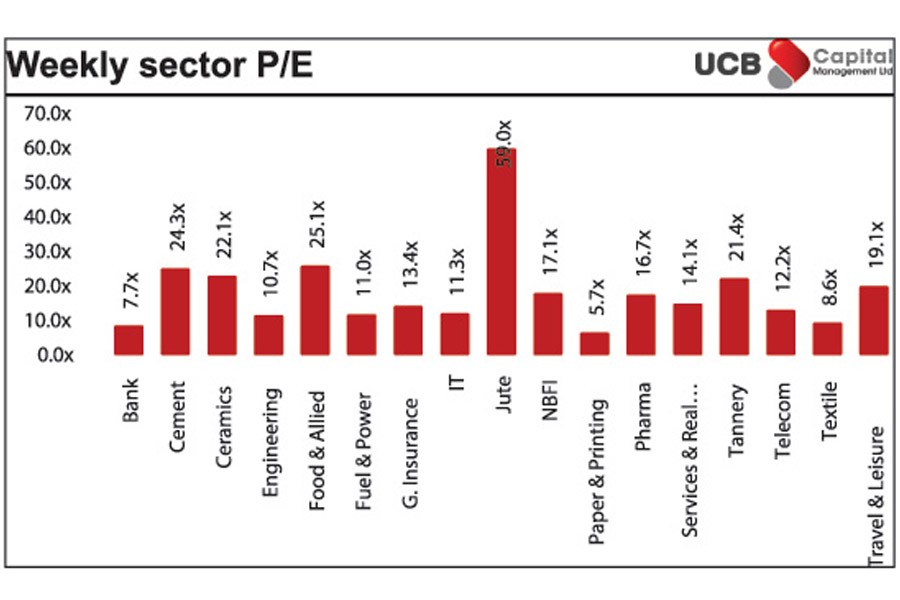 Stocks extended the losing streak for the third straight week that ended on Thursday as worried investors continued their selling binge on large-cap shares.

GP, which is the largest company by capital, slumped 4.56 per cent last week as the shaky investors sold GP shares riding on the news on appointing administrators at GP over unpaid dues.

The institutional investors are suffering from liquidity crunch while the retail investors are not confident enough to inject funds into stocks amid a gloomy market outlook, taking the market in the red zone again, said a leading broker.

Prolonged bearish trend frustrated general investors, said an analyst, adding that since beginning of the year, indices have been on the downward direction, with some periodic upward movement, which failed to sustain amid confidence crisis.

Accordingly, the DSEX has lost a cumulative 1,179 points or nearly 20 per cent in the past nine months since January 24, this year when the index peaked at 5,950.

A group of investors under the banner of 'Bangladesh Pujibazar Biniogkari Oikya Parishad' also staged a demonstration in front of the DSE building to protest against the continuous fall in indices during the week.

The aggrieved investors demanded immediate resignation of M Khairul Hossain, the chief of the capital market watchdog, and some top officials of securities regulators for their failure to restore normalcy in the market.

According to EBL Securities, the outgoing week saw investors dwindling confidence sliding further amidst the deepening of GP-BRTC regulatory conflict, BDT depreciation against USD and overall instability in capital market.

The stockbroker noted that regulator's short term support measures failed to create any sustainable impact on the market.

The outgoing week saw five trading days as usual. Of them, a single positive session with 110 points increase amidst four negative sessions which ultimately weighted more as DSEX lost 39 points.

The weekly total turnover on the prime bourse stood at Tk 15.63 billion, up from Tk 12.76 billion in the week before, as last week saw five trading days instead of previous week's four.

The daily turnover averaged out at Tk 3.12 billion, down 2.02 per cent from the previous week's average of Tk 3.19 billion.

According to International Leasing Securities, investors were selling off shares fearing further fall as the investors found no immediate solution to the current market confusion despite the meeting of DSE and DSE Brokers' Association.

The stockbroker noted that the investors were also getting worried about the telecom regulator moves to appoint administrators to GP over unpaid dues.