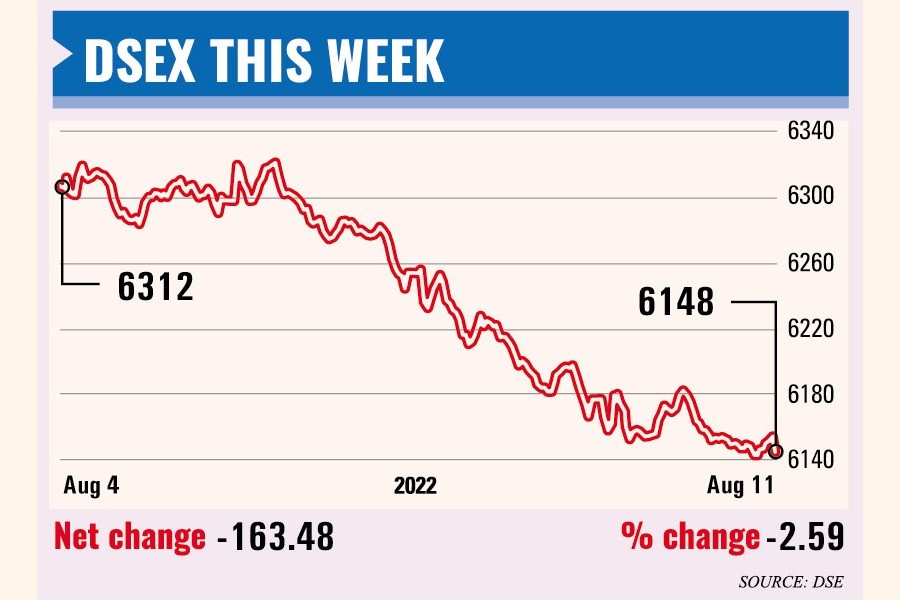 This week saw four trading days instead of five days as Tuesday was public holiday on the occasion of holy Ashura. The benchmark DSEX index of Dhaka Stock Exchange (DSE) closed lower in all the four trading sessions, as jittery investors rushed to offload their stocks to avoid further losses.

Dhaka bourse opened the week in the red and the index closed the first session with a marginal loss of 8.25 points. The downtrend continued for the next three days and the DSEX finally ended the week 2.59 per cent or 163.48 points lower at 6,148.77.

Following the price corrections witnessed by most listed securities, the market capitalisation of the DSE stood at Tk 5.03 trillion on Thursday, down 1.99 per cent from the week before.

The average daily turnover was Tk 8.96 billion, which was 11.44 per cent lower than the previous week.

According to a market review of EBL Securities, the bullish run of equities came to a halt this week as the announcement of fuel price hike by the regulatory authority has made investors worried about the state of the economy.

"The economy has already been under pressure from high inflation and depreciation of exchange rate which has been exacerbated by the fuel price hike announcement," it said.

Of the major sectors which saw price corrections, the banking sector lost 2.1 per cent, engineering 2.6 per cent, fuel & power 1.0 per cent, general insurance 3.8 per cent, life insurance 2.8 per cent, pharmaceuticals & chemicals 2.4 per cent, and textile 4.1 per cent last week.

Of the sectors which witnessed price appreciation, travel & leisure sector advanced 1.4 per cent, mutual fund 0.4 per cent and jute 0.7 per cent.

Investors' participation was concentrated mostly on textile sector that captured 24.9 per cent of the weekly turnover, followed by miscellaneous (12.9 per cent), pharmaceuticals & chemicals (12 per cent), financial institutions (8.2 per cent), and food & allied (7.5 per cent).

SEML FBLSL Growth Fund was the top gainer of the week. It jumped 15.29 per cent to close at Tk 9.80 each on Thursday.

Mozaffar Hossain Spinning Mills was the week's worst loser, shedding 14.29 per cent to close at Tk 28.20 each.

All indices of Chittagong Stock Exchange (CSE) also declined this week. CASPI, the benchmark index of SCE, dropped 2.23 per cent to close at 18,127.68 on Thursday.

Of 328 issues traded, 52 advanced, 219 declined and 57 remained unchanged. The port-city bourse posted a weekly turnover of around Tk 742.28 million.

Weekly Market review: Stocks back in red on sell-offs

Stocks edge up amid thin participation of investors