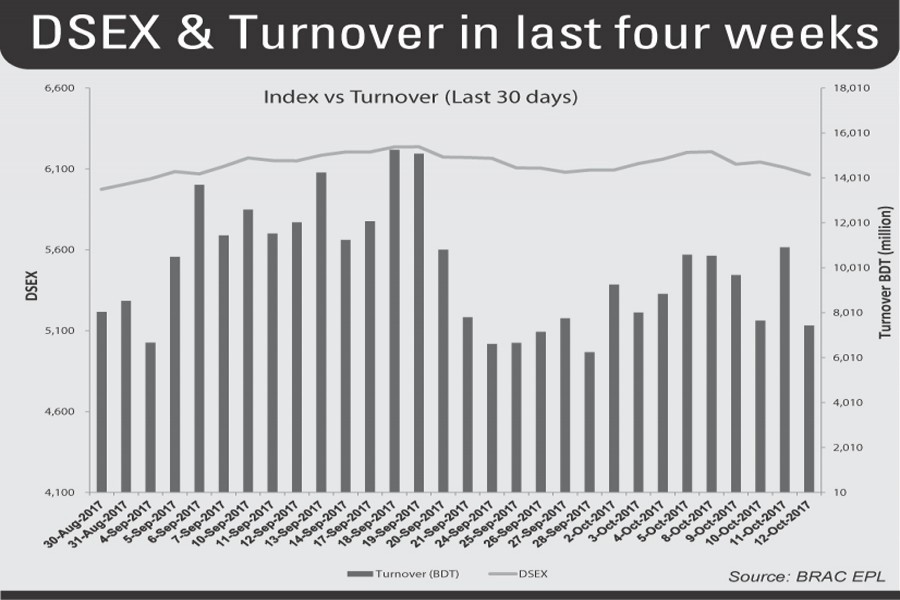 The central bank probe found that some banks invested in stocks exceeding their exposure limit and is now investigating the stock-market activities of another eight banks.

Brokers said the market reacted negatively to the central bank's recent action against the overexposed banks.

Following the central bank's move, the banking sector fell sharply by 3.80 per cent with 25 listed banks closed in the red. Of the banks, 13 lost more than 8.0 per cent each.

"Significant downward movement of banks, cement, food & allied, fuel & power and financial institutions has been the reason for the week's sharp fall in broad index," said an analyst at a leading brokerage firm.

Week-on-week, DSEX, the prime index of the Dhaka Stock Exchange (DSE), which replaced the DGEN in four-and-a-half-year back, went down by 138 points or 2.22 per cent to settle at more than one month low at 6,064.

LankaBangla Securities, said, "It is suspected that the index has entered into a correction phase after a prolonged period of gaining trend".

The stockbroker noted that looking at the large cap sectors, only telecommunication sector registered gain while others saw sharp fall.

The port city bourse, Chittagong Stock Exchange (CSE), also fell sharply with its Selective Categories Index, CSCX, slumping by 291 points or 2.49 per cent to settle at 11,378.

The total turnover for the week stood at Tk 46.23 billion on the DSE which was Tk 36.70 billion in the week before, rising 26 per cent as the last week saw five trading sessions instead of previous week's four.

The daily turnover averaged at Tk 9.24 billion, which was 0.76 per cent higher than the previous week's average of Tk 9.17 billion.

EBL Securities, a stockbroker, said, "The market breaks the rally quite drastically in last week pushing the index downward with some intervals".

The stockbroker noted that Bangladesh Bank's move to punish errant banks has reshuffled the investors' intention to impose maximum position on the stocks from banking sector.

"Dominance of the stocks from bank has influenced the index in the opposite direction last week. Furthermore, the corporate declaration from several companies in recent period could not attract investors," the stockbroker said.

Banking sector kept its dominance in turnover chart, grabbing 47 per cent of the week's total transaction, followed by financial institutions with 13 per cent and textile 6.0 per cent.

A total of 13 listed companies recommended dividend last week between 2.0 per cent and 90 per cent for the year ended on June 30, 2017.

The market capitalisation of the DSE also fell to Tk 4,075 billion, registering a decline 1.23 per cent over the previous week's Tk 4,126 billion.

The losers took a strong lead over the gainers as out of 334 issues traded, 247 closed lower, 72 closed higher and 15 remained unchanged on the DSE trading floor.

Stylecraft was the week's best performer, posting a 64.20 per cent gain following its hefty dividend declaration, while newly listed Aamra Networks was the worst loser, losing 20.35 per cent.