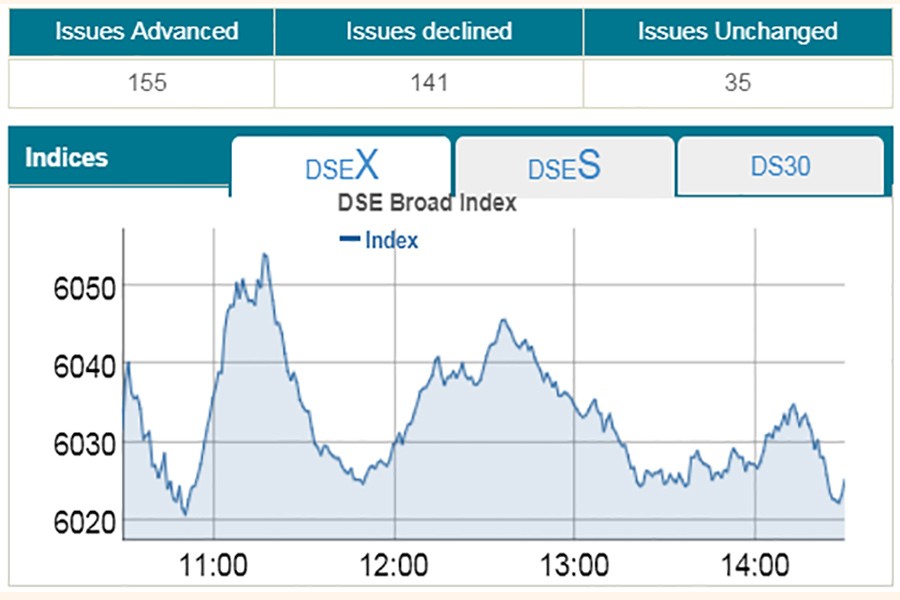 Stocks slipped into the red Wednesday, breaking a two-day positive session, as many investors sold shares to profit as some observed the market carefully.

“Selling of shares mostly from banks, telecommunication and textile sectors contributed the fall in indices,” he said.

After see-saw movement of the DSEX, the prime index of the Dhaka Stock Exchange (DSE), which replaced the DGEN in four-and-a-half-year back, settled at 6,025, losing 6.46 points or 0.11 per cent over the previous session.

Turnover, the most important indicator of the market, came down to Tk 5.28 billion, which was 14 per cent lower than the previous day’s turnover of Tk 6.15 billion.

Banking sector kept its dominance in turnover chart, capturing 24 per cent of the day’s total transaction, followed by financial institutions with 13 per cent and engineering 11 per cent.

A total number of 0.118 million trades were executed in the day’s trading session with trading volume of 137.13 million securities.

The total market capitalisation of the DSE stood at Tk 4,061 billion which was Tk 4,058 billion in the previous trading session.

Gainers took a modest lead over the losers as out of 331 issues traded, 155 closed higher, 141 closed lower and 35 remained unchanged on the DSE trading floor.

Wata Chemicals was the day’s best performer, posting a gain of 9.96 per cent while Information Services Networks was the day’s worst loser, plunging by 6.98 per cent.