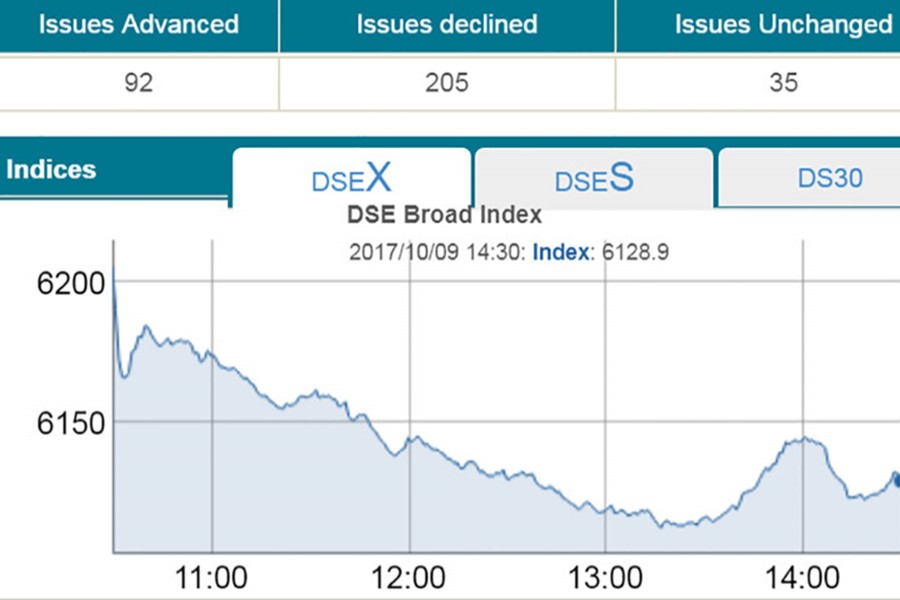 Brokers said the investors went on the selling binge fearing further fall of stock prices as the central bank is now investigating the stock market activities of another eight banks.

The market started with a steep decline and the downward trend continued till end of the session with no sign of reversal, finally ended more than 76 points lower.

DSEX, the core index of the DSE, which replaced the DGEN in four-and-a-half-year back, settled at 6,129 points, after eroding 76.60 points or 1.23 per cent after adding more than 126 points in the six consecutive trading sessions.

Turneover, the crucial indicator of the market, came down to Tk 9.67 billion, which was 8.25 per cent lower than the previous day’s Tk 10.54 billion.

The losers took a strong lead over the gainers as out of 332 issues traded, 205 closed lower, 92 closed higher and 35 remained unchanged on the DSE floor.

Stylecraft was the day’s best performer, posting a gain of 6.24 per cent while Simtex Industries was the day’s worst loser, plunging by 7.93 per cent.