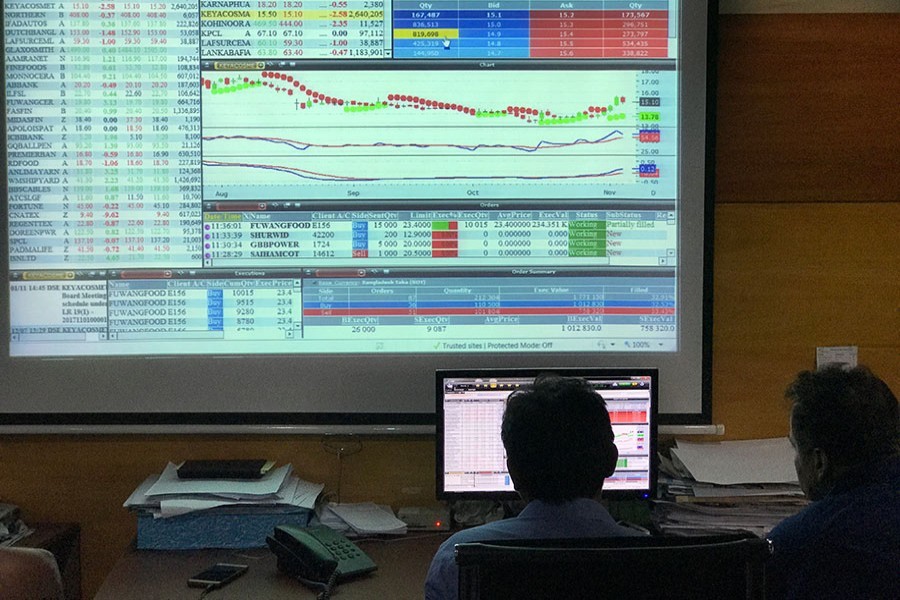 Stocks witnessed a big jolt in the outgoing week due to dearth of quality stocks and liquidity crunch.

All indices plunged more than 3.0 per cent in the week, as worried investors dumped their holdings amid growing panic.

The market capitalisation also eroded Tk 165 billion in one month while it wiped out Tk 763 billion in the past ten months, the DSE data shows.

Institutional investors were not playing a supportive role amid liquidity crunch while foreign investors have continued pulling funds out of the market amid low confidence, said an analyst said.

The foreign investors withdrew record Tk 857 billion in last nine months (March-November) this year from the country's premier bourse due mainly to lack of confidence.

He noted that ongoing erosion in stock prices reduced investment ability of the market intermediaries and high net worth investors.

Some brokerage firms also went for forced sales to minimise risks in margin loans, he added.

The index slide of the capital market began in late January this year and the market had hardly rebounded since then except periodic ups and down.

The weekly total turnover on the prime bourse stood at Tk 15.74 billion, down from Tk 23.10 billion in the week before.

The daily turnover averaged out at Tk 3.15 billion, down 32 per cent from the previous week's average of Tk 4.62 billion.

EBL Securities said stocks slumped as the panic-driven investors continued their selling spree due to fear of further fall amid concern over the country's economy.

The stockbroker noted that the investors adopted wait-and-see approach due to confidence crisis about the future market direction.

All the major sectors suffered loss more than 3.0 per cent with food sector witnessed the highest loss of 5.30 per cent, followed by power with 3.78 per cent, engineering 3.43 per cent, financial institutions 3.41 per cent, telecom 3.25 per cent, pharma 3.11 per cent and banking 3.04 per cent.

The market capitalisation of the DSE also plunged 2.46 per cent to Tk 3,436 billion on Thursday, from Tk 3,523 billion in the previous week.

Losers outnumbered the gainers, as out of 356 issues traded, 277 closed lower and 64 ended higher while 15 issues remained unchanged on the DSE floor in the outgoing week.

Anlimayarn Dyeing was the week's best performer, posting a gain of 12.76 per cent while the Makson Spinning was the worst loser, losing 18.18 per cent.