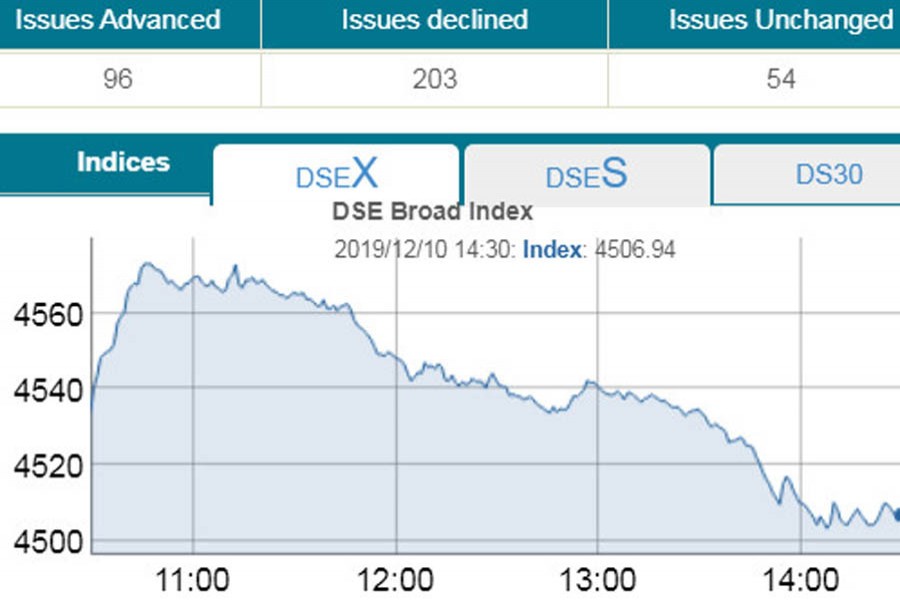 Stocks extended the losing streak for the four straight sessions on Tuesday as worried investors continued their selling binge amid growing concern over the country’s microeconomic situation.

Market analysts said the investors had been suffering lack of confidence for a long while disappointing data of some macroeconomic indicators affecting investors’ confidence badly.

Turnover, a crucial indicator of the market, however, rose to Tk 3.05 billion, which was 11 per cent increase over the previous day.

Losers took a strong lead over the gainers as out of 353 issues traded, 203 closed lower, 96 ended higher and 54 remained unchanged on the DSE trading floor.

A total number of 102,216 trades were executed in the day’s trading session with trading volume of 109.99 million shares and mutual fund units.

The market-cap of the DSE also dropped to Tk 3,428 billion on Tuesday, from Tk 3,446 billion in the previous session.

Miracle Industries was the day’s best performer, posting a gain of 7.80 per cent while Sonar Bangla Insurance was the worst loser, losing 8.72 per cent.

The port city’s bourse, the Chittagong Stock Exchange, also ended lower with its All Shares Price Index (CASPI)—losing 145 points to close at 13,683 and the Selective Categories Index - CSCX –shedding 89 points to finish at 8,301.

Here too, the losers beat gainers, as 143 issues closed lower, 60 ended higher and 36 remained unchanged on the CSE.