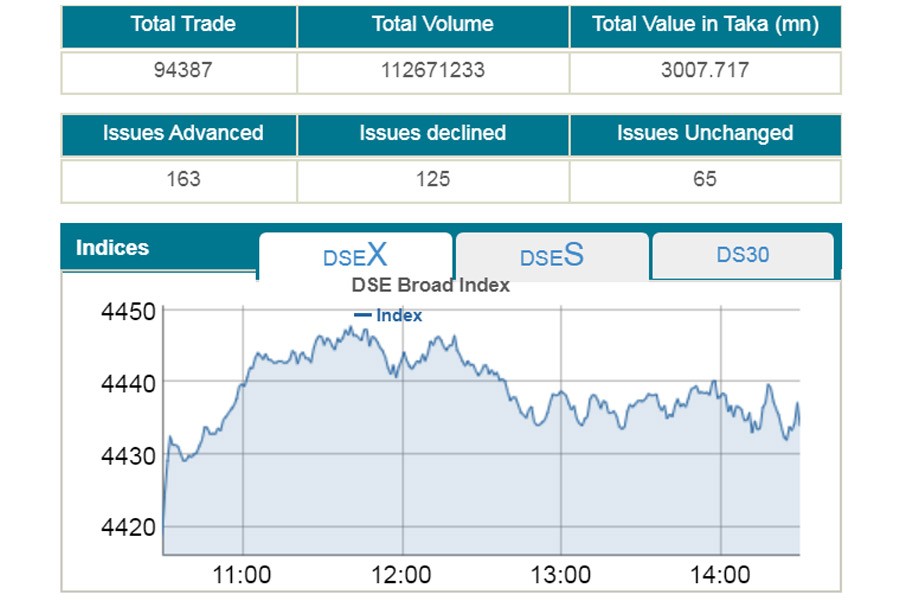 Stocks extended the gaining spell for the second day in a row on Sunday as bargain hunters continued to show their buying appetite on sector specific issues.

At the end of the session, DSEX, the prime index of the Dhaka Stock Exchange, went up by 15.10 points or 0.34 per cent to settle at 4,433 over the previous session.

Turnover, another important indicator of the market, stood at Tk 3.0 billion, which was 1.63 per cent higher than the previous day’s turnover of Tk 3.05 billion.

The gainers took a modest lead over the losers as out of 353 issues traded, 163 closed higher, 125 ended lower and 65 issues remained unchanged on the DSE trading floor.

A total number of 93,387 trades were executed in the day’s trading session with trading volume of 112.67 million securities.

The market capitalisation of the DSE also rose to Tk 3,388 billion on Sunday, from Tk 3,384 billion in the previous session.

Yakin Polymer was the day’s best performer, posting a gain of 9.80 per cent while Al-Haj Textile was the day’s worst loser, shedding 9.94 per cent.

Here too, the gainers beat the losers as 108 issues closed higher, 85 ended lower and 39 remained unchanged.