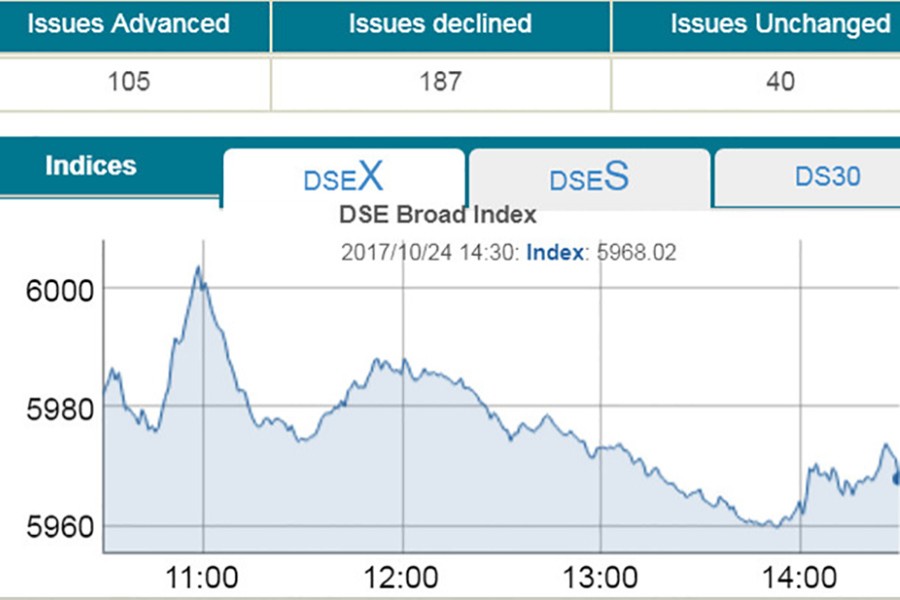 Market insiders said small investors were cautious about fresh exposure to the market, while institutional investors followed ‘wait-and-see’ strategy to inject money into stocks amid ongoing earning disclosures and dividend declarations, taking the market in red zone for second day.

After witnessing see-saw movement throughout the trading session, DSEX, the prime index of the Dhaka Stock Exchange (DSE), went down by 13.93 points or 0.23 per cent to settle at 5,968.

Bearish sentiment also reflected on the turnover activities as total turnover remained low amounting to Tk 5.36 billion, which was 2.48 per cent higher than the previous day’s turnover of Tk 5.23 billion.

A total number of 0.099 million trades were executed in the day’s trading session with trading volume of 122.66 million securities.

The total market capitalisation of the DSE stood at Tk 4,068 billion which was Tk 4,066 billion in the previous trading session.

The losers took a strong lead over the gainers as out of 332 issues traded, 187 closed lower, 105 closed higher and 40 remained unchanged on the DSE floor.

Monno Ceramic Industries was the day’s highest gainer, posting a 9.97 per cent rise, while Kay Q Que was the worst loser, plunging 9.96 per cent.