Stocks back to green riding on telecom, bank shares 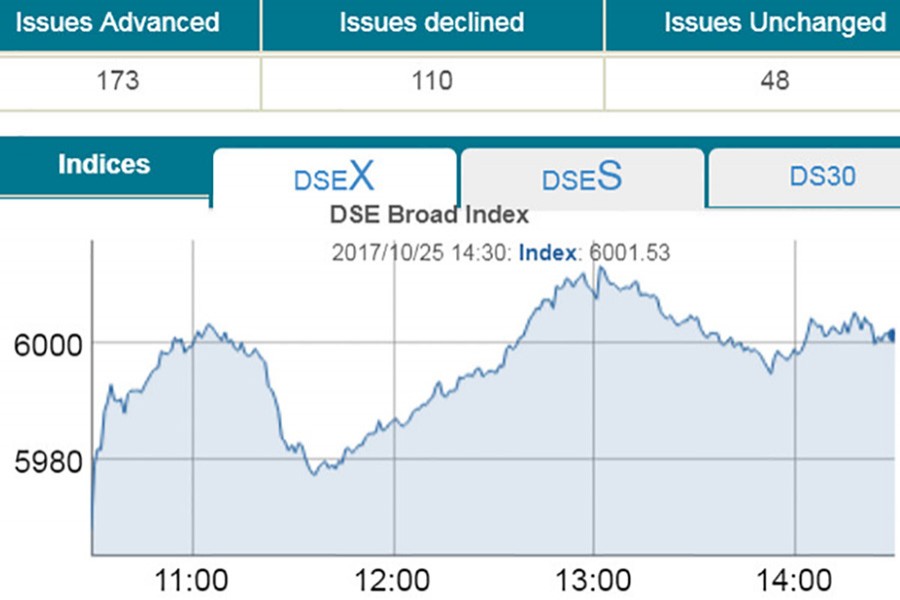 The prices of the most shares on the country’s both bourses increased on Wednesday, shrugging off the last two days’ downtrend.

Grameenphone, the lone listed mobile phone company’s share price continued to rise closing at Tk 445.70 on the DSE, the highest closing price after its listing.

The upward trend continued till end of the session amid modest volatility within first hour trading and rest of the session went up steadily, finally ended more than 33 points higher.

DSEX, prime index of the Dhaka Stock Exchange, which replaced the DGEN in four-and-a-half-year back, finished at 6,002, advancing 33.50 points or 0.56 per cent over the previous session.

Turnover, the most important indicator of the market, stood at Tk 5.83 billion, which was 9.0 per cent higher than the previous day’s turnover of Tk 5.36 billion.

A total number of 0.107 million trades were executed in the day’s trading session with trading volume of 165.11 million securities.

The total market capitalisation of the DSE stood at Tk 4,090 billion which was Tk 4,068 billion in the previous trading session.

Gainers took a modest lead over the losers as out of 331 issues traded, 173 closed higher, 110 closed lower and 48 remained unchanged on the DSE trading floor.

Tung Hai Knitting & Dyeing was the day’s best performer, posting a gain of 10 per cent while Kay & Que was the day’s worst loser, plunging by 4.88 per cent.