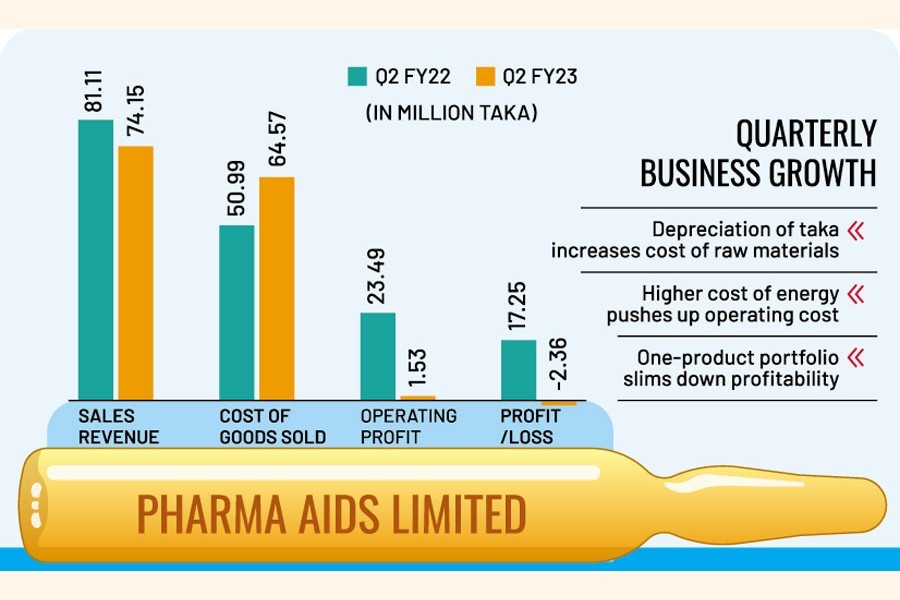 Pharma Aids incurred a loss of Tk 2.36 million for the second quarter of the FY23 in its first time since 2018 mainly due to a sharp rise in expenses.

The ampoule producer has reported that sales fell 8.58 per cent year-on-year to Tk 74.15 million for the quarter ended in December last year.

But the quarterly operating profit plunged by more than 93 per cent to Tk 1.53 million because of a jump in the prices of raw materials and other operating costs, according to a disclosure posted on the Dhaka Stock Exchange's website on Sunday.

The company said its income turned negative for Q2 of the FY23 due to the decrease in sales and an increase in cost of goods sold, cost of raw materials, gas consumption, cost of fuel for production and increased tax expenses.

An official of the company, however, said the currency devaluation was one of the reasons behind the quarterly loss. He preferred not to be named since he is not assigned to talk to the media.

A top executive of Square Pharmaceuticals said the quarter had been tough for others in the sector as well. He said Square Pharma's growth had slowed down during the time, compared to the previous year.

"The cost of doing business was high for many reasons, including currency devaluation and a hike in raw material prices and energy cost," he added.

Pharma Aids' limited product portfolio might be the reason why it saw its profit wiped out completely, said the official of Square Pharma requesting anonymity. "Now, it's tough to see growth in business depending on limited products."

Neutral glass ampoule is the only product that Pharma Aids sells.

Apart from the steep decline in the EPS, Pharma Aids also saw a sharp year-on-year fall in the net operating cash flow per share in July-December, 2022.

It reported the NOCFPS of Tk 2.92 for Q2 of the FY23, down from Tk 14.56 a year ago. The NOCFPS plummeted as the collection from sales fell, payment to suppliers was much higher, and tax went up, said the company.

Its shares have traded at the floor price of Tk 790.70 since November 10 last year. Before coming down to the floor price, the stock swung on the DSE.

Individual investors hold 61.16 per cent shares of Pharma Aids while institutes 15.25 per cent, according to the data available until the end of 2022.

Sponsor-directors jointly hold 23.59 per cent shares, much less than the required 30 per cent. Foreigners do not have any stake in the company that falls under the category 'A' having been listed on the bourses in 1987.