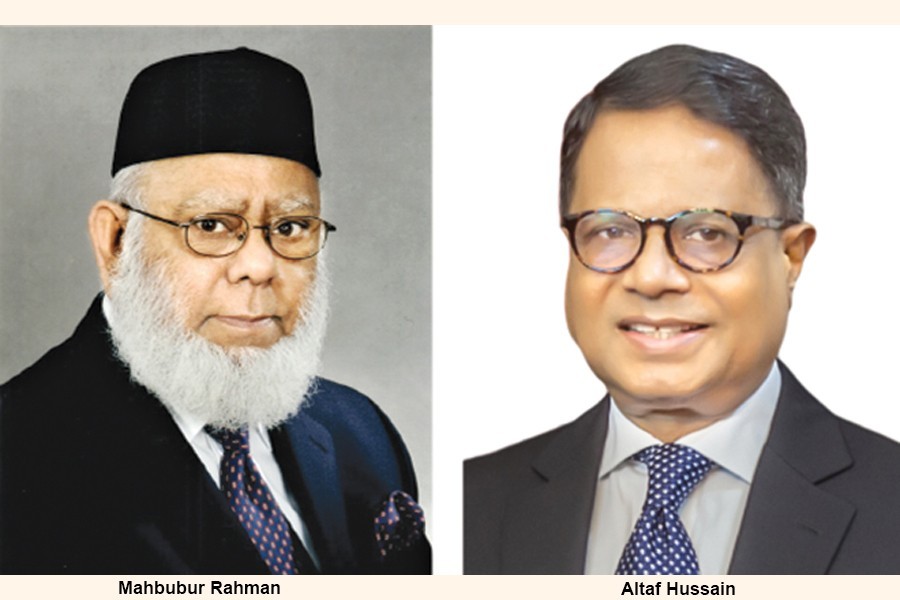 The Board of Directors of National Housing Finance and Investments Limited in its 219th meeting held recently elected Mahbubur Rahman as Chairman and Syed M. Altaf Hussain as vice chairman of the company for next 2 years, said a statement.

Mr. Rahman is the Founding Member and Former Chairman of Business Advisory Council (EBAC) of UN-ESCAP.

He is the Sole Arbitrator in Bangladesh for The China International Economic and Trade Arbitration Commission; Co-Chair of the Steering Board of 2030 Water Resource Group of World Bank; Vice Chairman of Bangladesh Foreign Trade Institute, Member of the Board of Governors of Institute of Business Administration (IBA) of the University of Dhaka, Founder Member of the Independent University Bangladesh (IUB) and a Director in the Board of Karnaphuli Fertilizer Co. Ltd. (KAFCO).

Mr. Rahman was awarded The Lifetime Achievement Award in 2012, by the "DHL-The Daily Star" - sponsored most prestigious 'Bangladesh Business Award'.

Mr. Rahman was honoured and awarded as Presidential Friend of Indonesia in 2012 at its 67th Independence Day in Jakarta by President Susilo Bambang Yodyono of Indonesia.

Mr. Rahman has been honoured by The Daily Star as an Eminent Personality for Lifetime Contribution to Nation-Building, in 2016.

He organized several International Business & Economic Events in Dhaka attended by Heads of Governments as well as Multilateral Agencies and led many Trade & Investment Delegations to a number of overseas destinations, including Leading a few Business Delegations as entourages of President/Prime Minister of Bangladesh.

Syed M. Altaf Hussain has been elected as Vice-Chairman of National Housing Finance and Investments Limited at its 219th Meeting of the Board recently for 2 years.

Syed M. Altaf Hussain is the Chairman of Pragati Insurance Ltd., has had a long and distinguished career in the fields of foodgrains, crop nutrition, business development, high-rise building development, technology, business operations and financial institutions with over 36 years of experience. He is a sponsor director and notably the founding chairman of Pragati Life Insurance Ltd.

As Chairman and CEO of WW Grains Corp. representing Cargill Inc., USA, he pioneered large-scale trading of food grains and fertilizer commodities. Through his work, he has spent considerable time traveling internationally and had the opportunity to attain an Engineering degree from the University of Texas, Arlington as well as successfully completed Grain Marketing & Agronomical courses from North Dakota State University and Harvard Business School. Additionally, he holds the Chairman title in the following businesses: Sonic Allied Industries Ltd., WW Properties Ltd. and the editorial board of 'The Daily Janata'. He is also Co-Chairman of Jamuna Resort Ltd. and was former Chief Advisor of ATDP-II projects funded by the USAID. Several social, governmental and educational institutions at home and abroad have acknowledged his agro-based expertise.