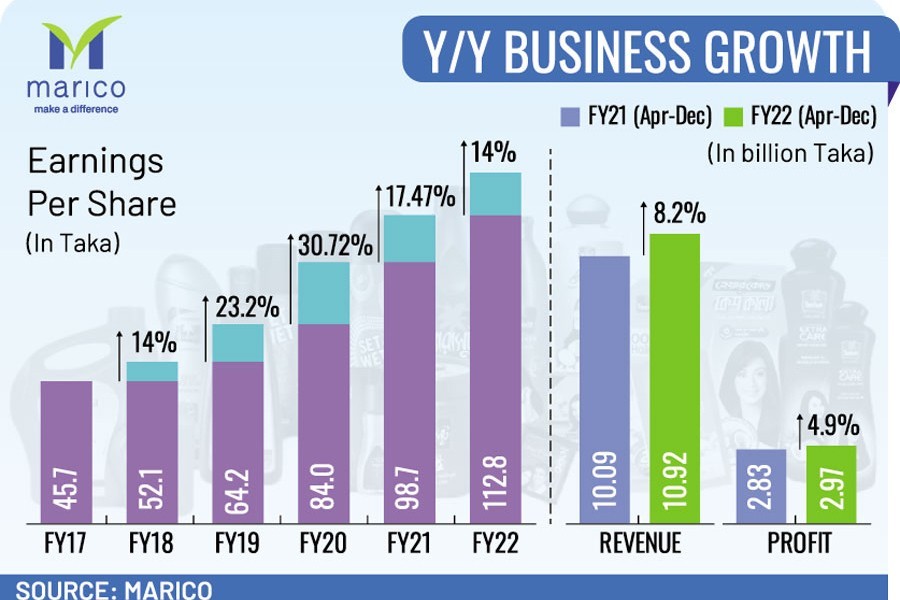 As a result, the earnings per share rose to Tk 30.93 for the third quarter of the FY23, which will end in March this year for the Indian multinational company, from Tk 27.35 for the same period of the previous year.

Quarterly revenue growth was 6.89 per cent in Q3 of the FY23, which means profit grew at a faster pace than revenue.

The company that sells consumer goods says it has been enduring an increase in the cost of sales and administrative expenses.

Its profit increased only 4.94 per cent in the nine months through December 2022, compared with the same period of the previous year. During the time, revenue growth was 8.22 per cent.

It seems the company did better in the third quarter leading to a higher profit growth than the average growth of the three quarters in a row ended in December last year.

General and administrative expenses amounted to more than Tk 308.19 million in October-December, 2022, up from Tk 271.88 million in the same period a year ago.

Md. Sahabuddin, company secretary of Marico Bangladesh, said the company had performed better if the size of EPS and its growth were taken into account.

"The company's quarter to quarter growth is satisfactory when other companies are struggling to survive a depressed economic situation," he said.

It is one of the stocks which secure lucrative returns for investors who prefer long-term investments.

Over a decade from FY12 to FY22, the company provided Tk 527.5 in dividend per share. During the time, its share price jumped from Tk 385 to Tk 2,411, according to IDLC Securities.

From these figures, the compound annual growth rate on investments comes to 22.6 per cent which is higher than the interest rates offered by fixed deposit receipts (FDR) and National Savings Certificates.

The company's sponsor-directors hold 90 per cent shares, institutes 6.54 per cent, foreigners 1.97 per cent and individual investors 1.49 per cent, according to data available until the end of last year.