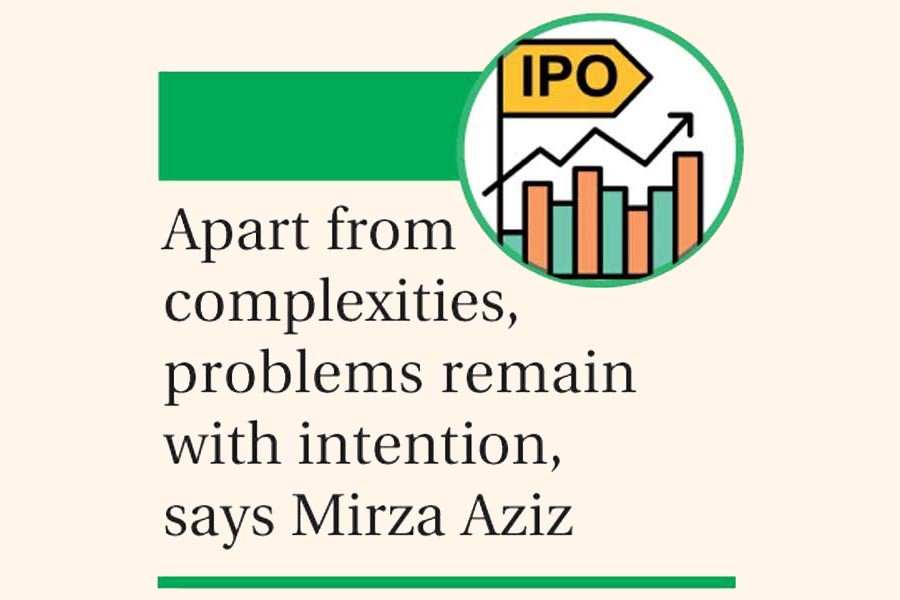 Many listed companies failed to utilise the IPO (initial public offering) funds within the stipulated time mentioned in their prospectuses.

Some of them even could not complete the fund use within the extended time while few companies allegedly earned interests on IPO proceeds or attempted to misuse the funds.

The reports of the companies as of December 31, 2019 show that the proceeds from IPOs, mainly allocated for new projects, construction, acquisition, installation of plants and import of machinery, remained unutilised.

Talking to the FE, some companies said use of the proceeds from IPOs was not possible within the stipulated timeframe for various reasons including rise in project costs, complexities of machinery import and change of projects.

"Only the BSEC cannot ensure utilisation of IPO funds. Other parties including independent directors also have a big role in ensuring it," Mr Rahman told the FE.

He said recently it was found that two companies were earning interests on IPO proceeds without using the funds for expansion.

"We went for enforcement action against them, when it came to our notice," said Mr. Rahman.

The companies which are yet to complete the utilisation of IPO funds include the Peninsula Chittagong, ACME Laboratories, Esquire Knit Composite, Regent Textile Mills and Pacific Denims.

The companies, however, extended the timeframe of completing fund utilisation following approval by their respective annual general meeting.

The ACME Laboratories received its IPO fund on April 21, 2016 and was supposed to complete utilisation of the money within next 15 months.

The company extended the timeframe until June 2022 for utilising the fund allocated for civil construction and procurement of machinery and equipment.

Md. Rafiqul Islam, company secretary at The ACME Laboratories, said utilization of the fund was delayed due to change of its project.

Their project cost also increased in the course of time due to hike in prices of materials, he added.

The Peninsula Chittagong was supposed to utilise IPO fund within 26 months by July 30, 2016.

But the company failed to complete the fund utilisation even in 70 months.

As per the report on utilisation of IPO proceeds as of December, 2019, around 51.48 per cent of the fund allocated for construction remained unutilised. The company's revised deadline for utilising the fund will end on December 31, 2021.

The officials of The Peninsula Chittagong could not be reached for comment regarding use of the fund.

The BSEC has decided to conduct special audit on misuse of IPO proceeds of the two companies.

According to BSEC officials, Esquire Knit Composite failed to utilise its IPO fund for building construction within the timeframe set in the IPO prospectus.

Besides, the company allegedly paid Tk 560 million in advance to a construction firm, also owned by the family members of the company's managing director (MD).

Another listed company Aman Cotton Fibrous utilised only Tk 82.50 million, out of Tk 800 million, within the stipulated timeframe.

"Besides, there were mysterious financial transactions conducted between Aman Cotton and its sister concerns. That's why, the BSEC will conduct special audit on utilisation of its IPO proceeds," the BSEC official.

The former chairman of the securities regulator Dr. AB Mirza Azizul Islam said apart from the said complexities there might be problems with the intention of utilising the IPO money properly.

"The only objective of raising funds from the capital market is to ensure the companies' growth. The securities regulator should be strict in utilisation of IPO funds on a case to case basis," said Mr. Islam, also a former caretaker government adviser.

The timeframe of utilising IPO fund by Pacific Denims ended on February 7, 2019 but the total amount allocated for machinery and equipment procurement remained unutilised as of December 31, 2019.

Sohorab Ali, company secretary at Pacific Denims, said they were not able to complete utilisation of the IPO fund within the stipulated timeframe as machinery could not be imported due to complexities with opening its L/C.

"The amount allocated will be utilised within the extended timeframe as advance payment has already been made," Mr. Ali said.

Of other companies, Regent Textile Mills raised capital with a timeframe of 17 months for completing the fund utilisation. But 95.17 per cent of the fund allocated for a new RMG project remained unutilised even after 48 months. The company extended the time until March, 2020 to complete the fund utilisation.

SK Trims & Industries was supposed to complete the utilisation of its fund by December 13, 2019. As per report on December 31, 2019 the whole amount of fund allocated for acquisition of machinery still remained unutilised.

Earlier, Regent Textile, Generation Next Fashions, The Peninsula Chittagong, Shasha Denims and Simtex Industries also revised their IPO fund utilisation plans as they failed to utilise the funds within their respective stipulated timeframe.