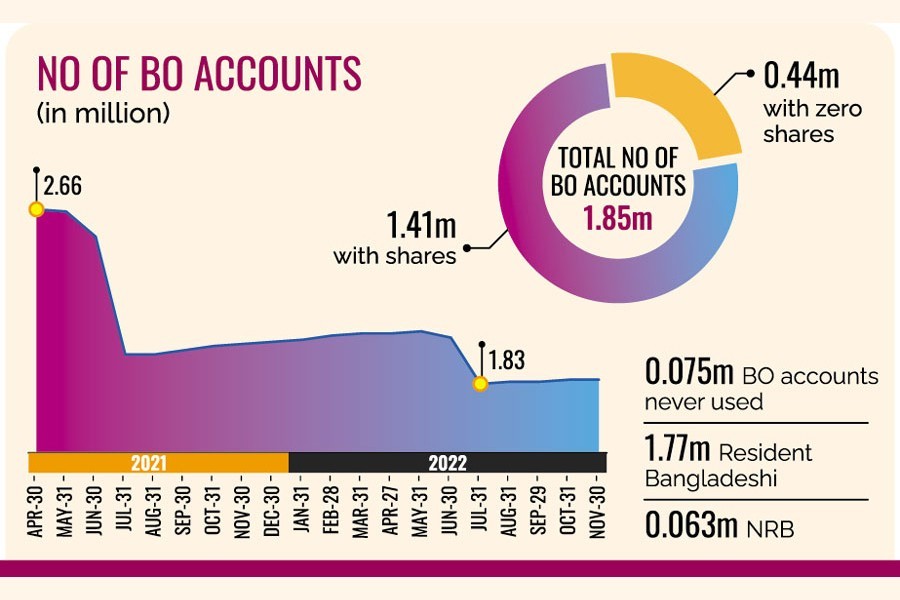 An exodus of investors from the capital market reduced the number of beneficiary owner's (BO) accounts by 11.06 per cent, or 0.23 million, to 1.85 million in the six months through November 30.

They felt discouraged from sticking around as profits from both the secondary and primary markets declined significantly.

The secondary market has remained low most of the time against the backdrop of global and domestic economic slowdown. Rising inflation and energy prices and depreciation of taka against dollar reined in the growth of businesses, eating away returns from investments in the stocks.

Short-term profits from trading on the bourses have also not been lucrative, with sellers far outstripping the number of buyers.

Almost 24 per cent of the existing 1.85 million BO accounts have zero shares, according to the data from the Central Depository Bangladesh Ltd (CDBL), which preserves information about individual and institutional investors.

The declining trend, however, began in June this year, triggered by the increase in the minimum investment requirement against a single account from Tk 20,000 to Tk 50,000. The move was intended to boost trade in the secondary market.

To trade in the secondary market and apply for primary shares, an investor has to open a BO account with the CDBL through a depository participant, usually a stockbroker or a merchant bank.

When compared with the monthly data of April last year, BO accounts dropped by 30 per cent or 0.81 million after the Bangladesh Securities and Exchange Commission (BSEC) had introduced a pro-rata allocation system replacing the old lottery system.

The pro-rata allocation system ensures proportionate distribution of shares to IPO applicants. For example, if a company plans to issue 100,000 shares and has received applications for 200,000 shares, it will issue 50 per cent of the shares investors have applied for.

As a result, the likelihood of an IPO applicant winning shares in a lottery through submission of more applications diminished.

Earlier, a section of investors opened BO accounts only to apply for IPO shares. After getting shares through lottery, such investors, unwilling to take any risk, sold their shares in the secondary market with a good profit.

In June this year, the minimum investment was hiked to Tk 50,000.

The cumulative effect of pro-rata system and the higher mandatory investment accelerated the exodus, which was why the number of BO accounts fell from 2.05 million to 1.83 million in just one month to July 31 this year.

Profits from IPO shares shrank as investors started receiving a very small number of shares through IPOs, having to invest at least Tk 50,000 for each account, said Md Sajedul Islam, senior vice-president of DSE Brokers Association of Bangladesh.

"IPO hunters did not find it a lucrative business to maintain too many accounts by investing Tk 50,000 each account in the secondary market and paying the annual maintenance fees."

Many small investors did not have enough funds to meet the requirement, Mr Islam added.

However, BO accounts increased in the meantime between October last year and June this year on the back of a bullish secondary market.

The market started to rebound in August 2021 riding on the improving pandemic situation and a gradual economic recovery. The DSE key index soared as high as 7,367 points in October last year. The turnover also hit decade-high in one session during the period.

The market recovery continued until January 2022, but the Russia-Ukraine war that began in late February this year has taken a heavy toll on stock prices.

In September last year, the securities regulator made IPO hunting tougher by setting Tk 20,000 as minimum investment for an individual investor to subscribe to an IPO.

The stock market regulator tightened the IPO market to discourage IPO hunters so to ensure a fair distribution of shares.

Earlier, investors were more confident about pouring funds into the primary market due to guaranteed profits and there was no mandatory investment requirement.

And that helped the number of BO accounts rise to an all-time high of around 3.20 million in June 2015.

An asset manager said huge losses in the secondary market as well as low profits in the primary market drove away investors.

Moreover, the share prices do not rise even after IPO shares get into the secondary market

For an instance, Global Islami Bank debuted with an issue price of Tk 10 on November 16 and dropped below the face value on the opening day. Its share has remained stuck at Tk 9.0 ever since.

DSEX, the prime index of the Dhaka Stock Exchange, plunged 521 points or 7.70 per cent since January this year.

Many investors also closed their accounts for the low number of IPOs in recent times as they opened accounts only to apply for IPO shares.

Only six companies and a mutual fund raised an aggregate amount of Tk 6.46 billion until November this year while 11 companies raised Tk 12.33 billion in 2021.

Some of the BO accounts were closed in July as investors did not pay annual fees for low profits in the primary market.

Bangladesh to strike $4.0b deal with Korea

Prices up far ahead of Ramadan