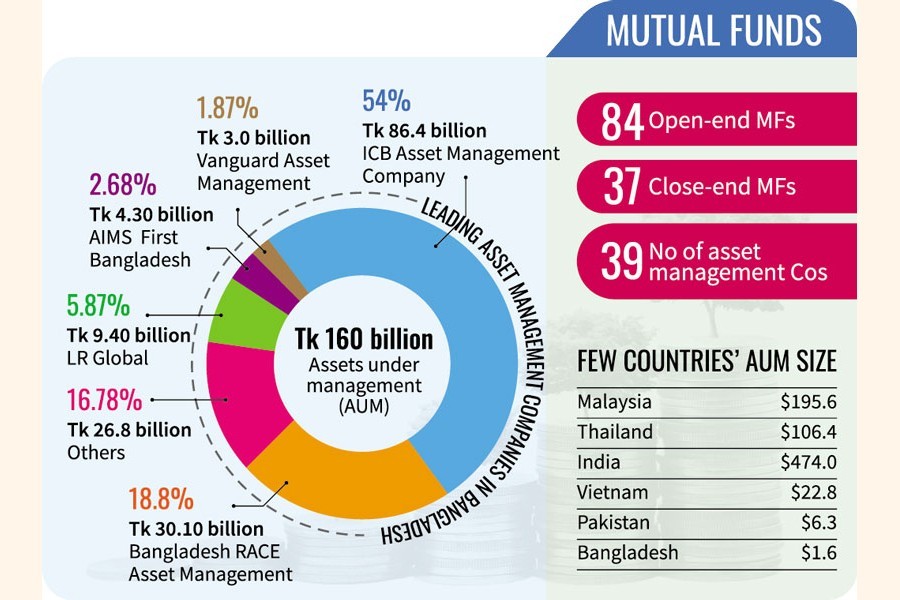 The 2010 capital market crash dragged the mutual fund sector into a dark abyss, but it started coming into light with the help of open-end MFs four years ago attracting new investments.

Fund managers during the time emphasized more on open-end MFs that give investors the flexibility of asset liquidation at their convenience.

Fund managers said open-end MFs have been gaining traction because of the scope of liquidation at any time at prices close to NAV. They are not traded on the stock exchange and so do not depend on the ups and downs of the market.

On the other hand, unit holders of the closed-end MFs listed with the secondary market will have to liquidate their holdings at market prices. This is a losing business when many close-end MFs are traded at below their net asset values or even face value.

For example, the latest NAV per unit of open-end 7th ICB Unit Fund is Tk 13.56, and an investor can liquidate a portion or the whole amount of his holding at Tk 11.70 per unit determined by the rules.

On the other hand, the latest NAV per share of a closed-end MF namely IFIL Islamic Mutual Fund-1 is Tk 9.22 but the units are now traded at the floor price -- Tk 6.40 each on the Dhaka Stock Exchange. If an investor needs to liquidate his asset at Tk 6.40 each share, he will get 44.06 per cent less than the money calculated based on NAV.

Presently, the units of closed-end MFs are traded at the floor prices below their NAV and face value of Tk 10.

Most closed-end MFs were traded below NAV and face value even before the introduction of the price movement restriction.

Asked, a senior official of the Bangladesh Securities and Exchange Commission (BSEC) said investors were able to purchase units of old closed-end MFs at prices below the face value of Tk 10 each.

"Then, why will they be interested in purchasing units of newly-floated closed-end MFs at Tk 10. That's the reason why fund managers are launching open-end MFs on a large scale."

According to the BSEC, the latest closed-end fund is ICB AMCL CMSF Golden Jubilee Mutual Fund launched in September this year more than three years after the introduction of IFIL Islamic Mutual Fund-1.

As per the existing rules, asset management companies are required to invest at least 60 per cent of a fund into the capital market. They are at liberty to put the remaining 40 per cent in the money market and fixed-income securities.

A MF is a professionally-managed investment scheme usually run by an asset management company (AMC) that brings together a group of people and invests their money in stocks, bonds and other securities.

An open-end MF having no specific tenure is floated with an initial size which is then expanded over time through the issuance of new units. But a closed-end MF has a fixed tenure.

Unit holders of Third ICB Unit Fund, an open-end fund, purchased units worth Tk 17.80 million while sales of the same MF units amounted to Tk 51.63 million in the FY22.

The higher sales indicate that unit holders of the Fund availed the opportunity of liquidating holdings.

Mr Shahidul Islam explained that investors were able to liquidate holdings at fair prices determined by the NAV. "This is the beauty of such securities," he said.

The units of open-end MFs are sold over-the-counter of the asset management companies while closed-end MFs are traded in the main boards of both the stock exchanges.

Sponsored by the government, ICB Unit Fund, the country's first MF, was established in 1981, aimed at mobilizing savings through the sale of its units to small investors and investing these funds in marketable securities.

The MF sector fell into trouble after the 2010-11 stock market debacle; their portfolios were squeezed due to the continuous erosion in the secondary market.

The then broad index of Dhaka Stock Exchange (DSE) declined 146 per cent or 5302 points between December 2010 and February 2012. The existential crisis continued for MFs after the introduction of the DSE broad DSEX in January 2013.

"These are the reasons behind the fund managers' recent interest in floating open-end MFs. The securities regulator has also reduced the gap between selling and repurchase rate considering the interest of unit holders."

Fund managers lack strategies in making the MFs popular through sufficient marketing, he said, adding that a provision of fixing management fees based on performances will also be included in the regulatory rules.

Experts blame fund managers for the less-than-expected growth of the MF sector.

Because of high professionalism of fund managers and aggressive marketing, MFs are very popular in India, they say.

The total volume of assets under management (AUM) in India have crossed Bangladesh's gross domestic product while AUM in other countries such as Malaysia, Thailand, Vietnam and even Pakistan are much higher than Bangladesh's.