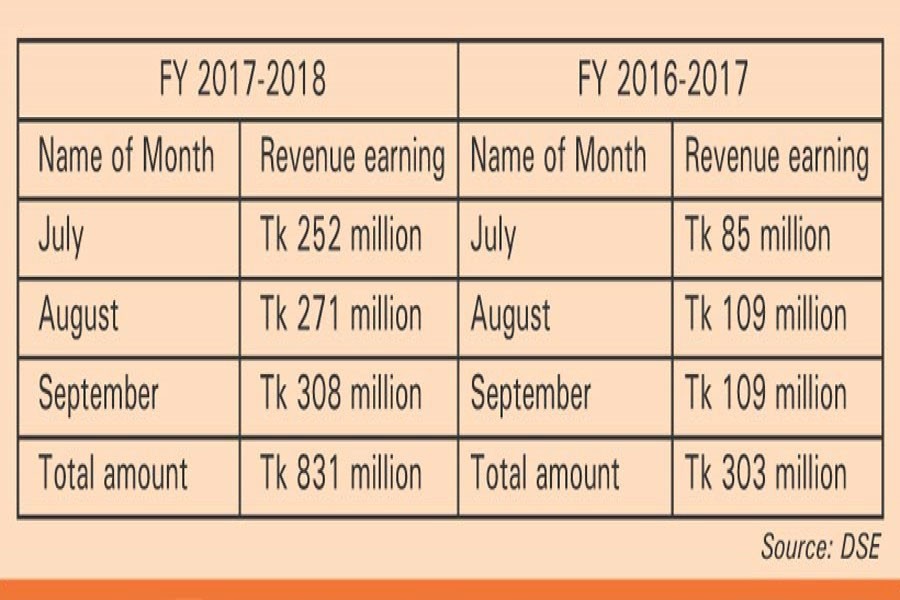 The government revenue earnings from the Dhaka bourse marked a 174 per cent rise in first quarter (Q1) for July-September period of the current fiscal year compared to the same quarter a year ago as trading volume was on the rise.

Market insiders said the government earnings from the premier bourse jumped as trading volume increased substantially in the first three months of the FY 2017-18, which helped higher tax collection, as earnings is related to trading volume.

The government bagged revenue worth about Tk 831 million in July-September period of FY 2017-18, which was only Tk 303 million in the same quarter a year ago, according to statistics from the Dhaka Stock Exchange (DSE).

The DSE, on behalf of the government, collects tax as TREC (trading right entitlement certificate) holders' commission and share sales by sponsor-directors and placement holders at the rate of 0.05 per cent and 5.0 per cent respectively and deposits the amount to the government exchequer.

The month-on-month the government earnings from DSE also rose nearly 14 per cent in September as total revenue collection stood at Tk 308 million in September which was Tk 271 million in August 2017, the DSE data shows.

Between July 1 and September 30 of the current FY, DSEX, the prime index of the DSE, added 473 points or 7.72 per cent. The daily average turnover for the July-September of 2017 stood at around Tk 10 billion.

"A consistent rally with higher transaction, during the first quarter for July-September period, helped to higher revenue collection from the premier bourse," said an analyst at a leading brokerage firm.

"On the back of rising turnover, the government earnings from the premier bourse rose accordingly, as earning is related to turnover," said a DSE official.

He noted that as turnover marked a rise in July-September period of the current calendar year compared to same period of the previous year, so did tax.

However, DSE paid tax worth Tk 4.47 billion in the FY 2010-11, the highest in its history, when the market saw wild trend before crash.