Its revenue rises above 48pc and profit 208pc since FY18 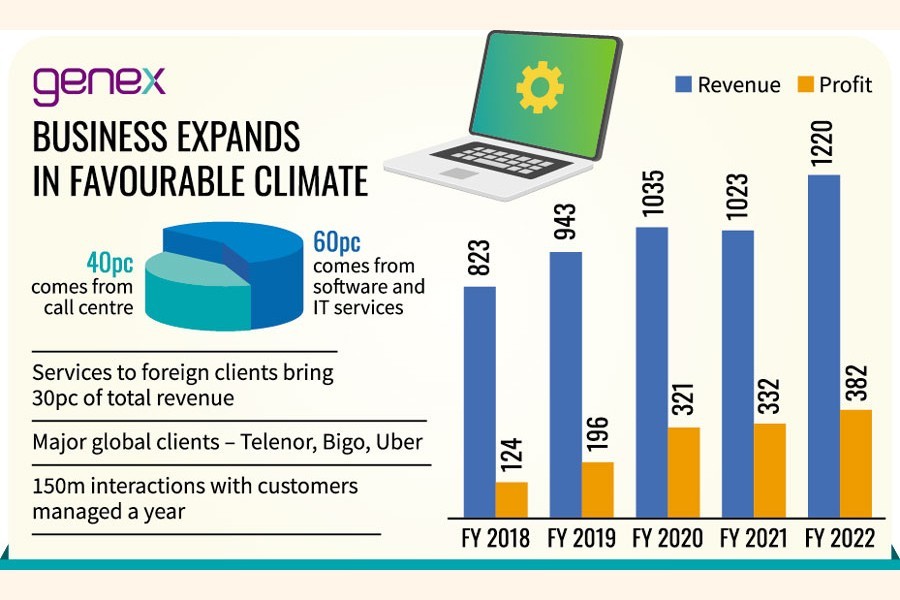 Genex Infosys forecasts its IT business to triple in the next five years on the back of three deals signed in recent times.

The 10-year deal to help the National Board of Revenue boost its VAT collection countrywide is likely the biggest one, finalised last month. It requires Genex Infosys to install electronic devices and sales data controllers at the company's own expense of Tk 10 billion.

In return, Genex will receive a commission of 0.53 per cent on VAT collected meaning its revenue will grow in tandem with the rise in VAT collection, said Md Jewel Rashed Sarker, chief financial officer (CFO) of the firm.

The agreement with the NBR is expected to generate revenue of Tk 2.12 billion per year upon the full-scale rollout, he said.

Genex Infosys, which provides information technology enabled services in local and global markets, has already achieved a remarkable 48 per cent revenue growth in the last five years through June this year.

Its profit growth, however, surpassed its revenue growth, with an astounding 208 per cent during the period, which reflects that the company has been focusing on efficiency and better outputs all along.

For the NBR, Genex will start setting up machines next week at retailers and wholesalers in three different zones. Within the next five years, 0.30 million machines will be set up in total.

The job does not end there. The IT firm will have to keep monitoring the operations of the devices to ensure effective collection of VAT.

Genex Infosys has got a wider client base within the border and overseas. The CFO boasted the firm's reputation gained over time for quality services, which, he said, would help win the next VAT machine installation project as well.

Big global clients, such as Telenor, Bigo and Uber, have outsourced their IT services to Genex.

In mid-September, the IT firm partnered with the Standard Chartered Bangladesh to help the bank reach out to more clients and scale up its distribution network. The job is expected to push up the annual revenue by Tk 60 million.

Meanwhile, Genex Infosys renewed its contract with Banglalink Digital Communication on the management of clients' queries and complaints through its call centre, which will generate Tk 120 million in revenue per year for the next five years.

"The new deal will bring 15-20 per cent more revenue than the previous one," said the CFO.

Genex Infosys began the operation of its call centre in 2013. Initially, there were hurdles but the company came out strong to become the largest call centre service provider in the country.

With a team of 4,000 plus employees, Genex also handles one of the busiest public hotline service channel - 333.

The promising business outlook has drawn investors to the stock market. Genex Infosys has kept its dominance on the Dhaka bourse turnover chart for the fourth straight week after the news of the deal signing with the NBR.

Investors showed buying interests with the hope of good returns.

The company saw a 19 per cent year-on-year growth in revenue and 15 per cent in profit for the fiscal 2021-22. Accordingly, it declared 11 per cent cash and 2 per cent stock dividend.

The growth is backed up by business diversification.

There is no foreign exchange risk as well as the company does not rely on regular imports of raw materials. Therefore, unlike manufacturing companies, the IT firm hardly bore any impact from the depreciation of taka against dollar, according to the EBL analysis.

Genex Infosys is likely to expand its business further as the demand for IT- related services shot up in local and global markets after the economic shocks rendered by the pandemic.

Many local business entities have already begun shifting to automation.

People familiar with the sector's development said many global IT giants are trying to hire Bangladeshi IT firms and professionals through the Offshore Development Center (ODC).

Currently, more than 4,500 ICT companies are operating in the country, employing 0.30 million plus professionals. The government support to the IT industry appears promising.

Bangladesh is now categorized as one of the next high-prospect destinations in the sector, with recognitions from AT Kearney, Gartner, Goldman Sachs & others, according to EBL Securities.