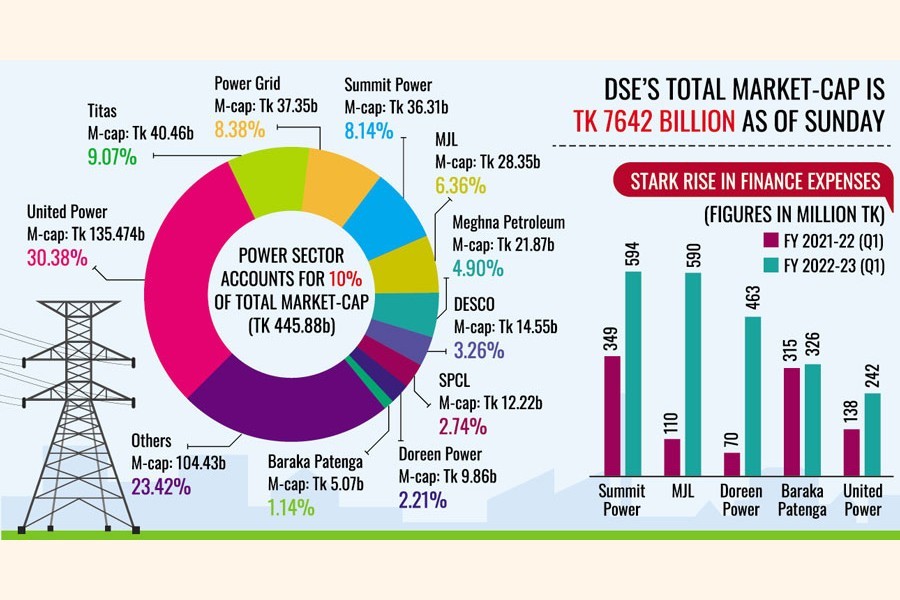 The operations of fuel and power companies depend entirely on imports, and so when taka loses its value against dollar, pricier fuel in the global market gets even pricier, pushing several listed companies into the red.

A majority of those that continued to make profits in the July-September quarter suffered a dip in earnings due to the escalation of production costs or power generation costs.

Among the 23 firms listed in the energy sector, 21 disclosed their quarterly earnings for the three months through September. Of them, nine recorded lower profits compared to the same quarter a year ago while seven companies could ensure a growth in income. One firm's business remained unchanged.

This is the backdrop to a stark contrast between the companies that sell fuel and those that generate electricity with imported fuel.

The former group comprising public and privately-run organisations could ensure a rise in profits, thanks to the fuel price hike in August, while the later endured the pain of losses because the rate at which the government pays for electricity supplied to the national grid remained unchanged.

The government increased fuel prices by 42 to 51.7 per cent, the highest in the country's history, citing the fuel price hike in the international market.

Of the private companies that sell fuel, MJL Bangladesh's earnings per share jumped 13 per cent to Tk 2.11and Intraco Refueling Station's 54 per cent to Tk 0.51 in the same quarter.

On the other hand, Baraka Power and Baraka Patenga Power entered into the loss-making zone this quarter from profits a year ago.

CVO Petrochemicals Refinery Limited and Khulna Power watched their losses grow bigger, according to the data from the Dhaka Stock Exchange.

Losses from foreign currency transactions in imports are to take the blame. Moreover, there was another issue of delayed payments by the government. The time gap led to additional expenses for higher exchange rates when the companies went for settling outstanding LCs.

For example, when Summit Power, the country's largest private sector power producer, opened LCs (letters of credit) to import heavy fuel oil (HFO) the dollar rate was Tk 86 to Tk 90, but by the time the LC period matured, an acute dollar shortage took the exchange rate to around Tk 120 in the kerb market.

As a result, Summit's production cost shot up by 75 per cent to Tk 15.92 billion, eroding profits, said Mohsena Hasan, a top official of the company.

The company reported a 21 per cent fall in profit in the July-September quarter due to the foreign exchange loss.

The loss may rise further if the central bank implements its plan to increase the dollar exchange rate to cross Tk 100 a dollar by the end of this year. Currently, the BB is selling dollars to the banks at Tk 98 each.

The local currency lost its value by at least 25 per cent against US dollar in the eight months through September after the Russia-Ukraine war began in February, according to the Bangladesh Bank.

"A majority of the private-sector power generation companies' profits went down due to significant losses for the foreign exchange volatility," said Minhaz Mannan Emon, an ex-director of the Dhaka Stock Exchange.

Shahjibazar Power's consolidated profit plunged by 79 per cent in the July-September quarter as its finance cost jumped 60 per cent to Tk 24.16 million.

However, Titas Gas Transmission & Distribution Company's profit dropped to half of what it earned a year ago though it does not rely on imports. Its income sank after the government cut the distribution charge by 48 per cent to Tk 0.13 per cubic metre gas in June.

Meanwhile, the sector's recent business performance had hardly any reflection in the capital market, owing to the price movement restriction.

Most stocks have remained stuck at floor prices. Sector leader Summit Power's stock has not moved from Tk 34 since October 10. The highest price was Tk 37 in June before the enforcement of the floor price in more than five months.

The market has been similarly brutal with other stocks of the sector.

A merchant banker, preferring anonymity, said the power sector may suffer a persistent slowdown in the months to come as the winter season brings down the demand for electricity.

Moreover, there are little signs that the global economic realities are going to change anytime soon, he added.