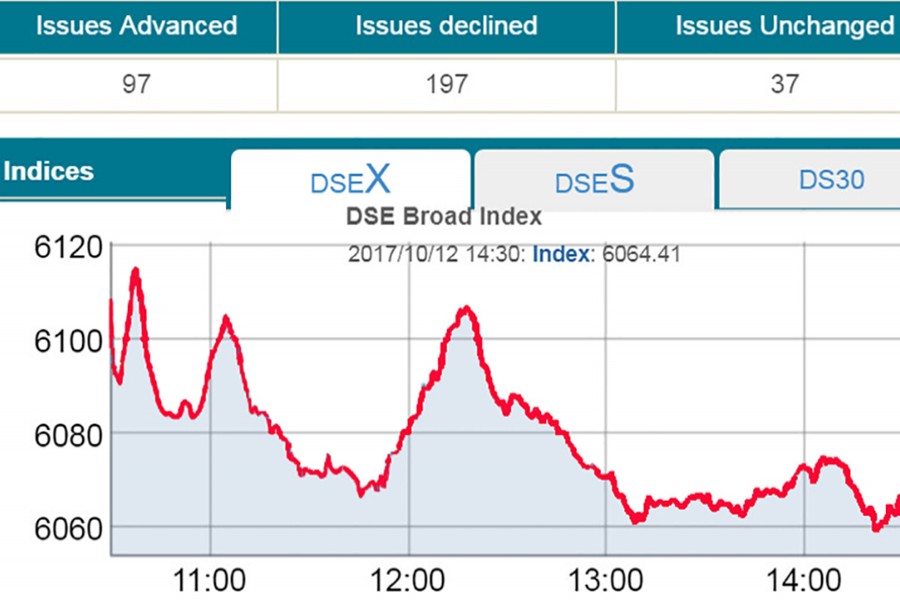 Stocks extended the losing streak for the second day in a row on Thursday, with key index of the major bourse dipping below 6,100-mark again, as cautious investors continued on selling binge.

Dealers said the market extended the losses as investors continued their selling spree, especially on banking shares, following the central bank’s recent action on seven banks on violating the securities rules on investment.

After witnessing volatile trading throughout the session, DSEX, the prime index of the DSE, which replaced the DGEN in four-and-a-half-year back, finished the week at 6,064 points, losing 44.16 points or 0.72 per cent over the previous session.

It was the lowest level of DSEX more than one month since September 4.

The two other indices also followed the suit. The DS30 index, comprising blue chips and the DSE Shariah Index (DSES) closed at 2,191 points and 1334 points, shedding 10.98 and 6.86 points respectively.

The trading activities also fell sharply by 32 per cent to Tk 7.43 billion over the previous day’s turnover Tk 10.92 billion.

A total number of 0.122 million trades were executed in the day’s trading session with trading volume of 209.12 million securities.

The total market capitalisation of the DSE stood at Tk 4,076 billion which was Tk 4,096 billion in the previous trading session.

Losers took a strong lead over the gainers as out of 331 issues traded, 197 closed lower, 97 higher and 37 remained unchanged on the DSE trading floor.

Apex Spinning & Knitting Mills was the day’s best performer, posting a gain of 9.94 per cent while Modern Dyeing was the day’s worst loser, plunging by 16.55 per cent following its poor dividend declaration.