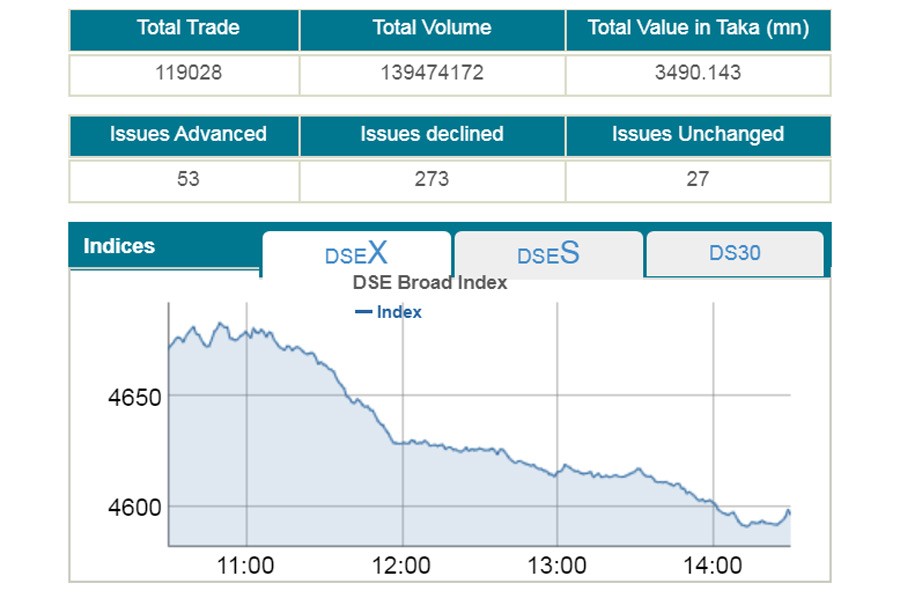 The prime index of the Dhaka Stock Exchange dipped below the 'psychological' threshold of 4,600-mark after three years on Sunday as investors dumped their holdings to prevent further losses.

The DSEX has lost a cumulative 175 points in the past one month while it eroded 1,354 points since January 24, this year when the index peaked at 5,950.

The slide began when the news emerged that fiscal 2019-2020 budget was passed in parliament on June 30, 2019 without any significant incentive for stocks and the market had hardly rebounded since then except for periodic ups and down.

Turnover, a crucial indicator of the market, also fell and amounted to Tk 3.49 billion, which was 19 per cent lower than the previous day’s turnover of Tk 4.32 billion.

Losers took a strong lead over the gainers as out of 353 issues traded, 273 closed lower, 53 ended higher and 27 remained unchanged on the DSE trading floor.

A total number of 119,028 trades were executed in the day’s trading session with trading volume of 139.47 million shares and mutual fund units.

The market-cap of the DSE also slumped to Tk 3,482 billion on Sunday, from Tk 3,523 billion in the previous session.

Sinobangla Industries was the day’s best performer, posting a gain of 10 per cent while Regent Textile was the worst loser, losing 14.52 per cent following its price adjustment after record date.

The port city’s bourse, the Chittagong Stock Exchange, also saw sharp decline with its All Shares Price Index (CASPI)—losing 223 points to close at 13,979 and the Selective Categories Index - CSCX –shedding 137 points to finish at 8,485.

Here too, the losers beat gainers, as 186 issues closed lower, 37 ended higher and 16 remained unchanged on the CSE.