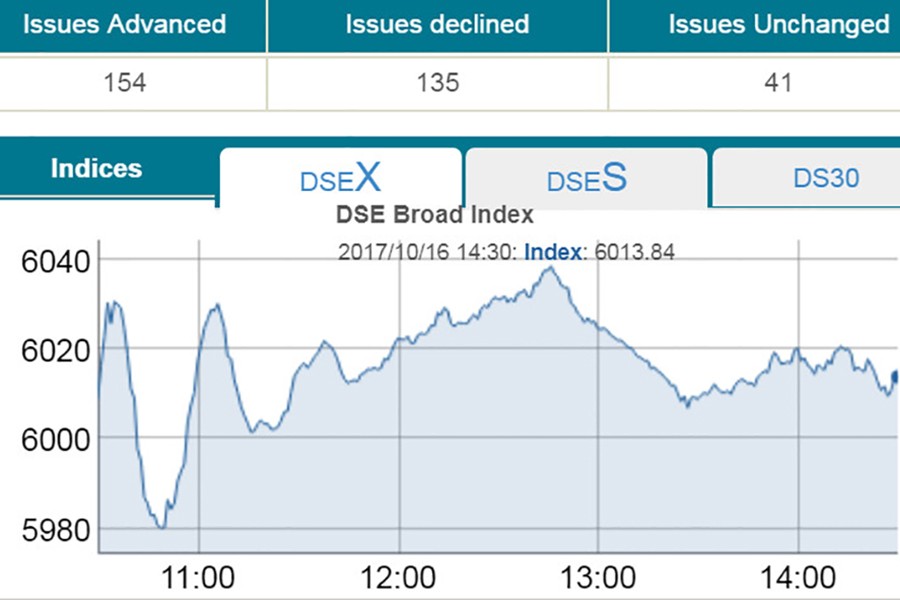 Turnover at the Dhaka Stock Exchange (DSE) came down to Tk 5.03 billion on Monday, lowest in the last three months, as investors reluctant to make fresh investment in the market.

Turnover, the most important indicator of the market, stood at Tk 5.03 billion, registering a decline of 18.87 per cent from the previous day.

Brokers said investors were mostly inactive and not confident enough to put in fresh funds. The market felt sales pressure from the investors who were sitting on profit.

After witnessing volatility almost throughout the session, DSEX, the prime index of the DSE, which replaced the DGEN in four-and-a-half-year back, finished at 6,014, advancing 4.89 points or 0.08 per cent over the previous session.

A total number of 0.094 million trades were executed in the day’s trading session with trading volume of 140.86 million securities.

The total market capitalisation of the DSE stood at Tk 4,054 billion which was Tk 4,053 billion in the previous trading session.

Gainers took a modest lead over the losers as out of 330 issues traded, 154 closed higher, 135 closed lower and 41 remained unchanged on the DSE trading floor.

Asia Pacific Insurance was the day’s best performer, posting a gain of 9.24 per cent while Mithun Knitting was the day’s worst loser, plunging by 7.20 per cent.