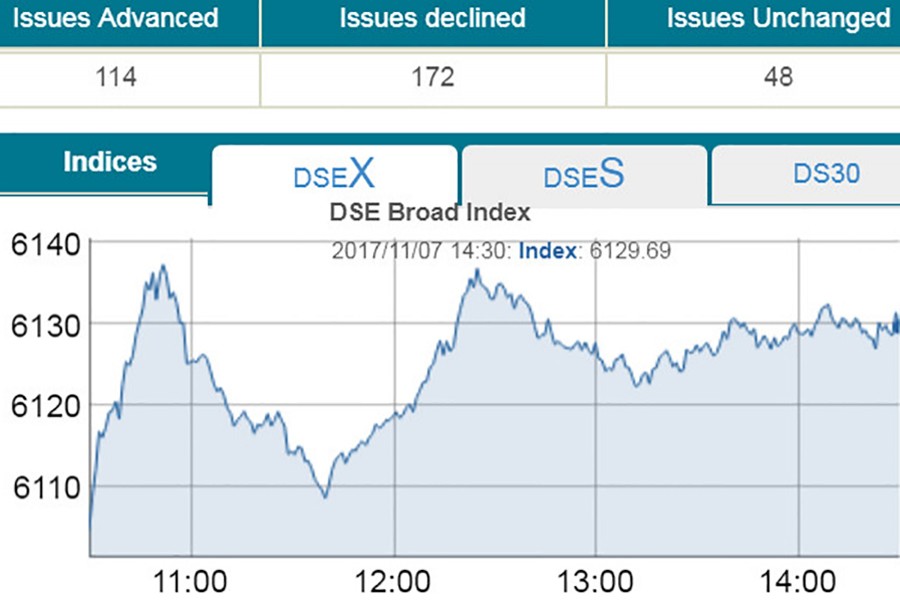 Stocks ended higher for the second day in a row Tuesday, with turnover hitting nearly one month high on the major bourse, as investors continued to show their buying appetite on banking sector issues.

However, share price of newly listed Oimex Electrode fell 2.36 per cent to close at Tk 111.50 each, after flying debut in the previous day.

The market started with a positive note and the positive trend sustained till end of the session amid modest volatility in the first hour, finally closed more than 25 points higher.

DSEX, the prime index of the DSE, which replaced the DGEN in four-and-a-half-year back, settled at 6,130, advancing 25.18 points or 0.41 per cent over the previous session.

Turnover, the most important indicator of the market, stood at Tk 7.44 billion, which was 10.70 per cent higher than the previous day’s turnover of Tk 6.72 billion.

Losers took a modest lead over the gainers as out of 334 issues traded, 172 closed lower, 114 closed higher and 48 remained unchanged on the DSE trading floor.

Shahjalal Bank was also the day’s best performer, posting a gain of 6.71 per cent while BD Welding was the day’s worst loser, plunging by 5.55 per cent.