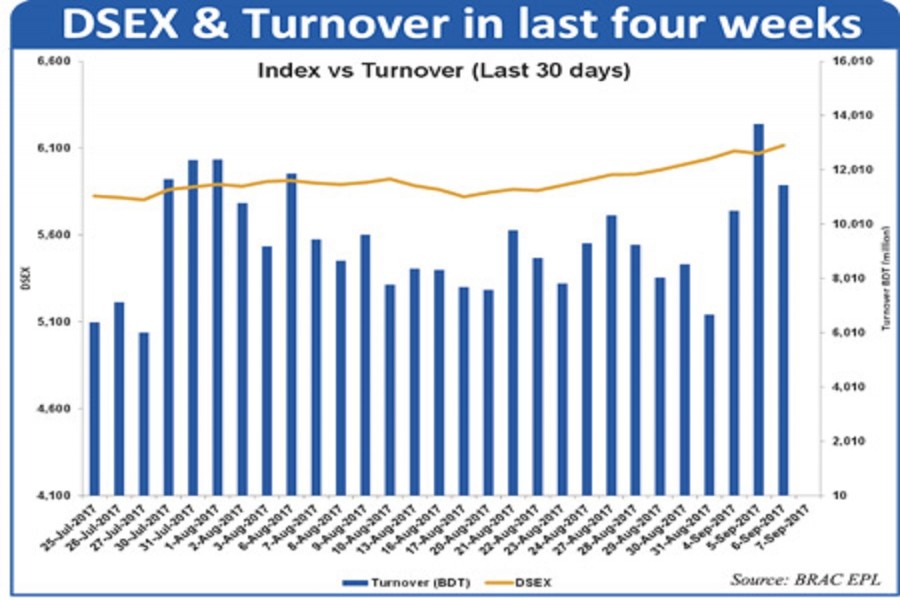 The Dhaka bourse passed an eventful week that ended Thursday, as the core index of the prime bourse exceeded 6,100-mark for the first time since its inception in January 2013.

Market insiders said after several futile attempts in last two weeks, DSEX finally budged up, exceeding 6,100 points level for the first time since its inception in more than four-and-a-half years ago.

However, he advised the investors to invest carefully in a rising market and should analyse the fundamentals of securities beforehand.

The week witnessed four trading sessions instead of usual five as the market remained closed Sunday on the occasion of Eid-ul-Azha. Of them, three sessions closed higher while one saw mild correction.

LankaBangla Securities, a stockbroker, said, "The broad index passed another buoyant week as the pre-Eid rally continued with the index gaining 108.5 points".

The stockbroker noted that the financial sector stocks mostly drove market activity throughout the week with hefty market turnover.

"Overall, investors are exhibiting bullish mentality amidst increased fund flow towards the market," the stockbroker said.

The port city bourse, Chittagong Stock Exchange (CSE), also ended higher with its Selective Categories Index, CSCX, advancing by 226 points or 2.0 per cent to settle at 11,468.

The total turnover for the week stood at Tk 42.31 billion on major bourse which was Tk 45.45 billion in the week before, falling 6.91 per cent as last week saw four trading sessions instead of previous week's five.

The daily turnover averaged at Tk 10.58 billion, which was 16.36 per cent higher than the previous week's average of Tk 9.08 billion.

Banking sector kept its dominance in turnover chart, grabbing 35 per cent of the week's total transaction, followed by financial institutions with 11 per cent and textile 10 per cent.

The increased capital base of the banking sector opened up fresh opportunity for banks to invest more in the stockmarket through lending to merchant banks, said a market source.

A senior executive of a merchant bank said the demand for margin loan rose as investors are enthusiastic about injecting fresh funds amid rising price index.

"Investors participation backed by hope brought buoyancy in sector specific stocks helped the benchmark index to cross 6,100 points mark for the first time after its inception since January 2013," commented International Leasing Securities, in its weekly analysis.

The stockbroker noted that buoyancy in several large-cap issues, mostly from telecom, bank and pharmaceuticals sectors has contributed sharply to the upswing in indices.

The total market cap of the DSE also rose to all-time high to Tk 4,077 billion, registering an increase of 1.41 per cent over the previous week's Tk 4,021 billion.

The large-cap sectors showed mixed performances. Telecommunication posted the highest gain of 4.28 per cent, followed by banks with 3.57 per cent, pharmaceuticals 0.97 per cent and food & allied 0.26 per cent.

Engineering, fuel & power and financial institutions lost 0.56 per cent, 0.24 per cent and 0.05 per cent respectively.

The gainers took a marginal lead over the losers as out of 334 issues traded, 178 closed higher, 136 lower and 20 remained unchanged on the DSE trading floor.

Social Islami Bank was the week's highest gainer, posting a 28.24 per cent gain, while Samata Leather Complex was the worst loser, losing 15.30 per cent.