Benchmark corrections of Dhaka bourse lower than many other frontier markets 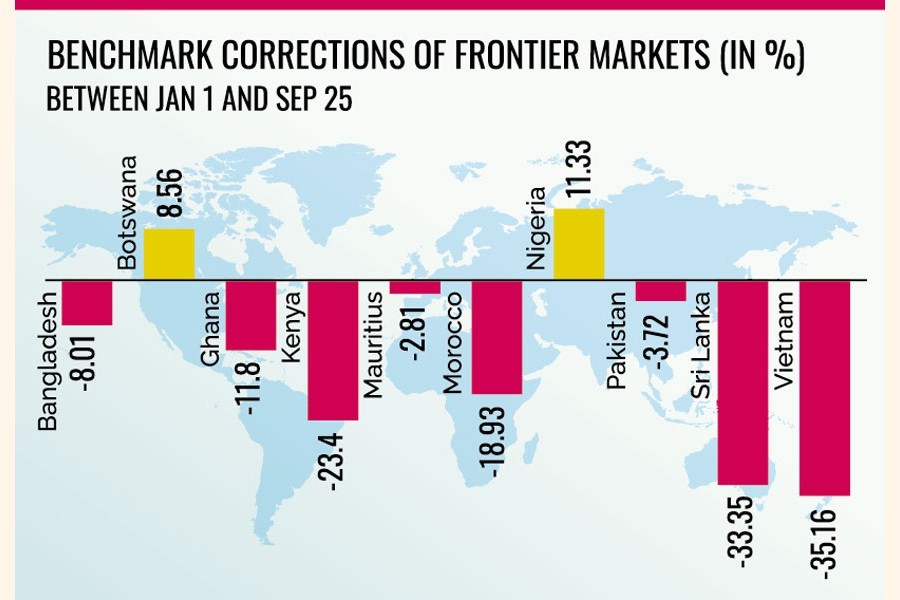 It was March 8 when the securities regulator felt compelled to impose 2 per cent lower circuit breaker to stop the benchmark index of the Dhaka bourse from plunging further.

The previous two weeks had proved brutal, with the index shedding 492 points to 6,474 points after Russia pushed into Ukraine turning months of speculations into reality.

The downward price movement restriction was then followed up by many other controlling measures, which contained the benchmark correction of the Dhaka bourse to 8.01 per cent this year through November 25.

During the same period, many other frontier markets suffered higher erosion. For example, the benchmark index of Vietnamese Ho Chi Minh Stock Exchange saw 35.16 per cent correction while Sri Lankan index 33.5 per cent and Pakistan's 3.72 per cent.

A frontier market is stronger than the least developed countries (LDCs) but weaker than the emerging markets. It is too small, carries too much inherent risk, or is too illiquid to be considered an emerging market.

Among the South Asian nations, the stock markets of Bangladesh, Pakistan and Sri Lanka are frontier ones while India's belongs to the emerging category.

The Dhaka bourse has been held higher by some good performing sectors, such as pharmaceuticals and textile, he said.

Does the juxtaposition, however, reflect that the Dhaka bourse has been performing better than others?

Post-Covid market volatility had also led to the imposition of floor price, but the DSEX exited the policy with ease riding on an increase in liquidity flow after its removal by Bangladesh Securities and Exchange Commission on June 17, 2021.

Market operators also point out market-friendly stimulus packages handed out by the Bangladesh Bank and intensifying surveillance by the regulatory body that had helped restore investors' confidence and in turn stabilize the market back then.

This time, the market's post-floor-price adjustment will depend on the mitigation of the macroeconomic concerns.

"Investors are in a wait-and-see mood. Foreign investors alleviated the selling pressure. Everything will now depend on risks mitigation," said a senior official of IDLC Investments.

The first sharp correction was observed on February 24, the day Russia invaded Ukraine. The DSEX shed 109 points that day.

Four consecutive sessions drove down the index to 6,474 points on March 8 with a loss of 474 points.

To avert any further deterioration, the securities regulator imposed 2 per cent lower circuit breaker amid a mounting selling pressure by panic-stricken investors.

The circuit breaker was then elevated to 5 per cent in April and then brought back down to 2 per cent in May. The floor price was also introduced in desperate moves to rein in the falling market.

Apart from the benchmark correction, the Dhaka bourse has recently observed a significant decrease in the daily turnover.

The DSE's daily turnover had not exceeded Tk 10 billion in 11 sessions in a row since November 10.

On November 24, the DSE posted a turnover of Tk 3.23 billion, the lowest in a month.

Chairman of EDGE Asset Management Company Asif Khan cited another factor behind the markets' decline. He said the rising interest rates in the USA had weakened currencies of other countries, forcing corrections of frontier markets.

He, however, said the market situation of Bangladesh is not comparable with others since it has been kept under control by the floor price policy.