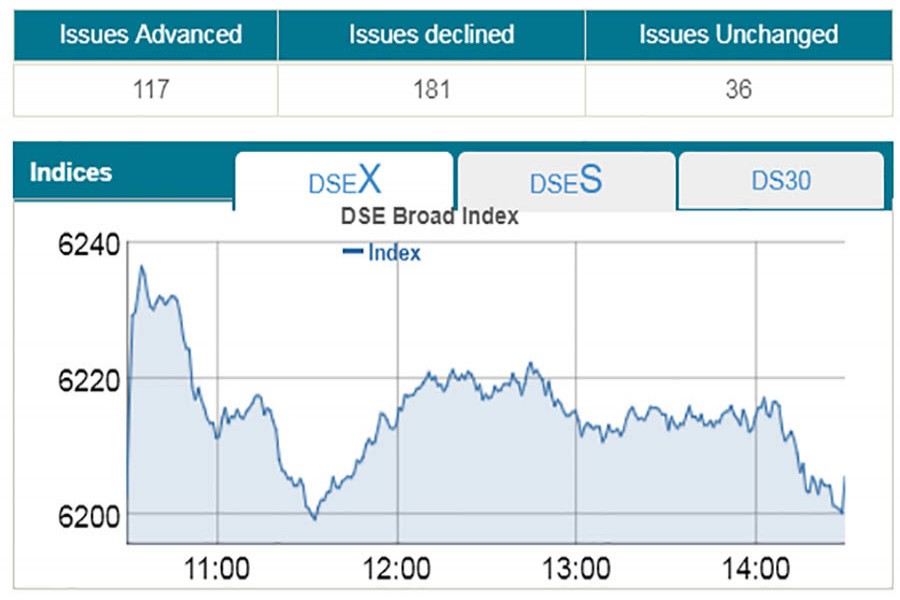 Dhaka stocks ended almost flat in green Sunday after volatile trading as investors were active both sides of trading fence throughout the trading session.

The market started with an upward trend and the key index of the major bourse adding more than 28 points within first 15 minutes of trading, but most of the initial gains eroded amid sale pressure as the session progressed, finally key index closed only 3.18 points up.

DSEX, the core index of the DSE, which replaced the DGEN in four-and-a-half-year back, settled at 6,205.50 points, after advancing 3.18 points or 0.05 per cent over the previous session.

The trading activities remained encouraging as total turnover on DSE amounting to Tk 10.54 billion, which was only 0.38 per cent lower than the previous day’s Tk 10.58 billion.

However, losers took a strong lead over the gainers as out of 334 issues traded, 181 closed lower, 117 higher and 36 remained unchanged on the DSE trading floor.

Northern Jute Manufacturing Company was the day’s best performer, posting a gain of 8.15 per cent while newly listed Aamra Networks was the day’s worst loser, plunging by 5.88 per cent.