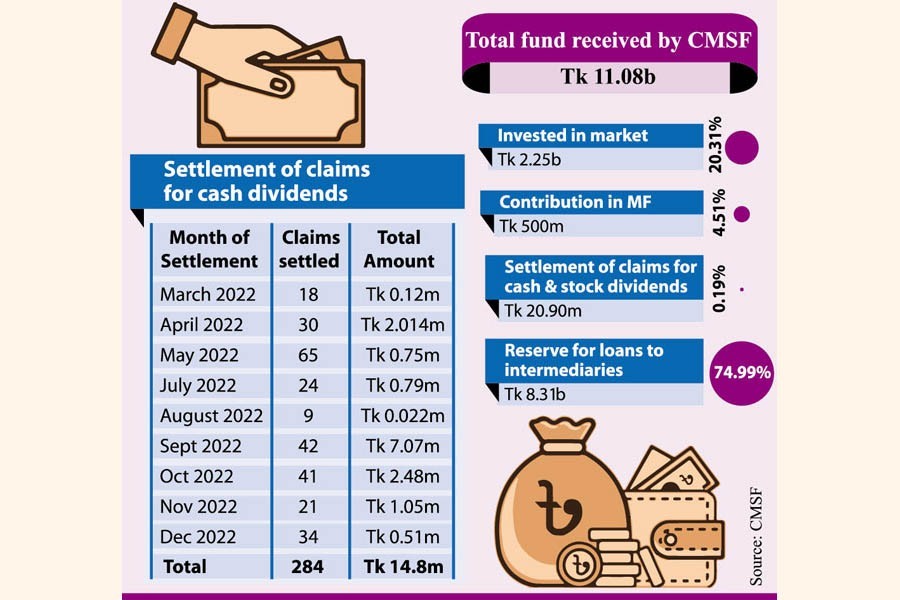 Saif Imam Zamir in September last year received Tk 0.142 million in cash dividend after he had claimed returns yet to be paid by a company where his mother invested 29 years ago.

As many as 283 more claims of undistributed cash dividends were settled between March and December last year, thanks to the Capital Market Stabilisation Fund (CMSF).

The Fund was established by the Bangladesh Securities and Exchange Commission (BSEC) as a custodian of undistributed or unclaimed or unsettled dividends (cash or stock) or un-allotted rights shares or non-refunded public subscriptions.

It was aimed at settling undistributed dividend claims and ensuring liquidity support for market intermediaries. The Fund became operational in June 2021.

Many listed companies had kept dividends not paid to their shareholders with them, showing excuses that the addresses given were wrong or investors' bank accounts had expired or recipients could not be traced.

The Fund has made the dissemination of information about undistributed dividends mandatory. To be compliant, the issuers now publish the names of the dividend holders.

Many investors, who had been unaware of their dividends, came to learn about their dues following announcements on the companies' websites.

As per the rules, the CMSF handles the distribution of unpaid dividends due for at least three years.

A claimant has to write an application to the issuer which then communicates the matter to the CMSF.

The operational management committee of the CMSF verifies the claim looking into the supporting documents submitted along.

On completion of the scrutiny, the CMSF settles the claim within 15 days by sending the undistributed cash dividend to the bank account or stock dividend to the BO (beneficiary owner's) account of the claimant.

The Fund also received undistributed stock dividends of 83.3 million shares from 190 issuers, the market value of which is Tk 6.16 billion.

The 284 claims settled so far had all the required documents, leading to the distribution of Tk 14.8 million in cash to investors. Another 45 claims for stock dividends worth Tk 6.10 million were also settled by the end of 2022.

The CMSF has about 25 claims pending because those do not have supporting documents.

Apart from settling investors' claims, the CMSF has made several investments in the capital market.

To stabilise the market, the CMSF injected Tk 2.25 billion into stocks through the Investment Corporation of Bangladesh (ICB).

The securities regulator has launched a close-end mutual fund -- ICB AMCL CMSF Golden Jubilee Mutual Fund - in celebration of the 50th Anniversary of the independence of Bangladesh.

The size of the fund is Tk 1 billion, half of which came from the CMSF as sponsor of the MF.

The MF made its debut trading on September 21, 2022 on the Dhaka Stock Exchange (DSE) and the Chittagong Stock Exchange (CSE). ICB Asset Management Company is the asset manager with Brac Bank and Bangladesh General Insurance Company (BGIC) the custodian and the trustee.

The CMSF has kept the unused fund in a bank. The regulator is framing rules for using the fund to disburse loans to the market intermediaries.

The intermediaries will get loans at a low interest rate from the CMSF, said Md Monoar Hossain, chief of operations at the CMSF.

The office bearers of the CMSF have no scope of using the principle amount of investors' undistributed dividends for the purpose of the Fund operation.

Before the Fund formation, the securities regulator estimated a huge amount of undistributed dividends kept with the issuers.

Many issuers are yet to deposit unpaid dividends to the CMSF. In the next course of action, the BSEC will appoint an auditor to dig out the remaining undistributed cash and stock dividends, said Md Monoar Hossain, chief of operations at the CMSF.