A gloomy year for stock investors 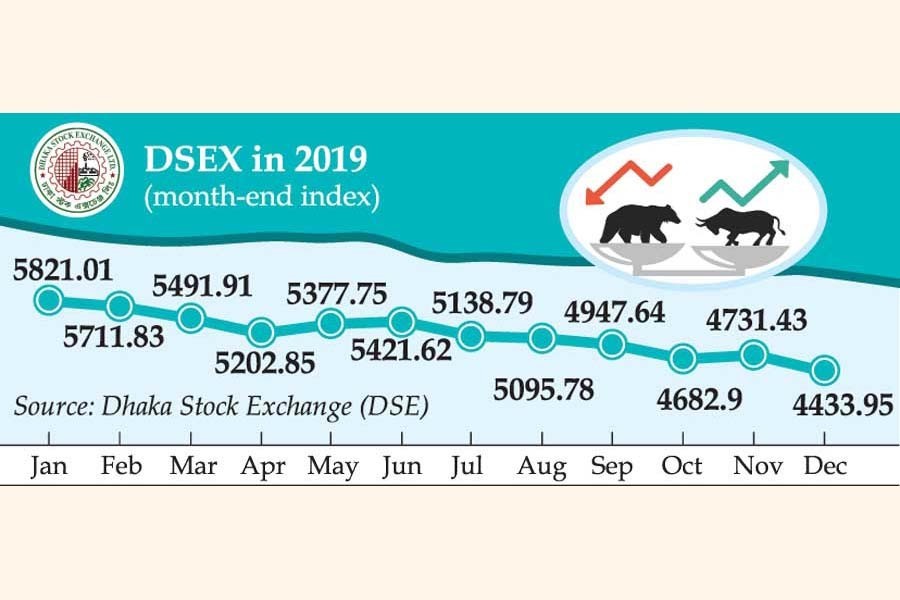 The capital market passed yet another gloomy year as the core index of the Dhaka Stock Exchange (DSE) lost 18.5 per cent year-on-year in 2019, after hitting a 42-month low.

After the stock market crash in 2010-2011, the government came up with some instant market supportive measures.

The market even after nine years of a fragile journey failed to get a strong foothold, as investors were discouraged by one issue after another.

The market has been in the doldrums almost throughout the year 2019 amid investors' confidence crisis.

The financial sector remained volatile with liquidity crunch while soaring interest rate, huge non-performing loans and pressure on the exchange rate spilled over into the capital market, said an analyst at a leading brokerage firm.

The index was hovering between 4,390 and 5, 950 points during the year. The index reached highest at 5,950 on January 24 while dipping to 42-month low to 4,390 on December 24 amid lack of institutional investor participation.

As of Monday, the other indicators of DSE also remained in the negative territory.

Market capitalisation of the prime bourse also shed 13.22 per cent in the outgoing year to Tk 3,395 billion.

The daily turnover, another important gauge, stood at Tk 4.80 billion on an average, down by 13 per cent year-on-year, in 2019.

The stock market stepped into 2020 amid concern over the depressing macroeconomic outlook, lingering tussle between GP and telecom regulator over an audit claim and little hope of an immediate market recovery.

Most surprising that the large-cap stocks, considered as blue chips, suffered most during the year as foreign investors' pulling funds out of the market that worsened the situation.

An analyst said the free-fall in the trusted securities like GP, Square Pharma, British American Tobacco, United Power and BRAC Bank left no option for investors but to leave the market.

The GP stock plunged more than 32 per cent since February this year which impacted the overall market.

Throughout the year, GP was embroiled in a tussle with the Bangladesh Telecommunication Regulatory Commission (BTRC) over the telecom regulator's audit claim of Tk 125.80 billion in unpaid taxes and dues.

The chairman of the Bangladesh Securities and Exchange Commission (BSEC) also blamed the plunge in stocks on the ongoing tussle between GP and the telecom regulator as well as huge sell-offs by foreign investors.

Foreign investors sold more shares than they bought as they fear the local currency may devalue further and macroeconomic indicators may worsen.

The depreciation of local currency against the US dollar was another reason for withdrawal of funds by the foreign investors.

Shares of BATBC, Square Pharma, United Power and Brac Bank also slumped 72 per cent, 32 per cent, 27 per cent and 24 per cent respectively in 2019.

The stock market is stuck well below the expected level. The market slide began early in the year and intensified the fall when fiscal year 2019-2020 budget was passed in parliament on June 30, 2019 without any significant incentive for stocks and the market had hardly rebounded since then.

"The investors had run for exit after the market crash in 2010-11 with fear and anger, and their confidence is yet to be recovered," said an analyst.

The big players behind the crashes are yet to be punished, which is one of the key reasons that the investors could not get back their confidence in the market, he added.

The financial sector is not performing well as investors are suffering from confidence crisis due soaring non-performing loans, which hit the bank stocks hard, he further said.

The listed mutual funds have become a burden for the investors, as all the 37 mutual funds, except four, are being traded far below their face value.

Funds raised through issuing rights shares sank further in 2019 as only one company raised only Tk 899.3 million while two companies had collected Tk 2.68 billion in 2018.

The dearth of quality initial public offerings (IPOs) as another reason for the low investor confidence, he said.

Eight securities, mostly small ones, got listed with DSE in 2019. With the inclusion of these new issues, the total number of listed securities in the bourse stood at 587.

The investors were not enough confident to put fresh funds on stocks in various reasons despite many sound issues came to a lucrative price level, said Dr AB Mirza Azizul Islam, a former adviser to the caretaker government.

Mr Islam, a former chairman of the Bangladesh Securities and Exchange Commission (BSEC), investors were cautious about the unexpected slow condition in some of the country's economic indicators and assessing the possible impact on the stock market.

Mr Islam said companies with good fundamentals and reputation should be allowed to be listed on the market, which can improve depth.

He stressed the need for bringing profit making state-owned enterprises and multinational companies into the market.

Mr Bashar, also CEO of MTB Capital, the investors had been suffering from lack of confidence for long while growing concern over the country's overall economy exacerbated the confidence crisis.

He noted that ongoing erosion in stock prices also reduced investment ability of the market intermediaries and high net worth investors.

The country's bourses -- Dhaka and Chittagong -- are running without managing directors, with the authorities are still looking for new MDs for the last six months.

The liquidation of People's Leasing and Financial Services, a listed non-bank financial institution, due to deterioration of its financial health in the last several years, which also hit the investors' confidence hard.