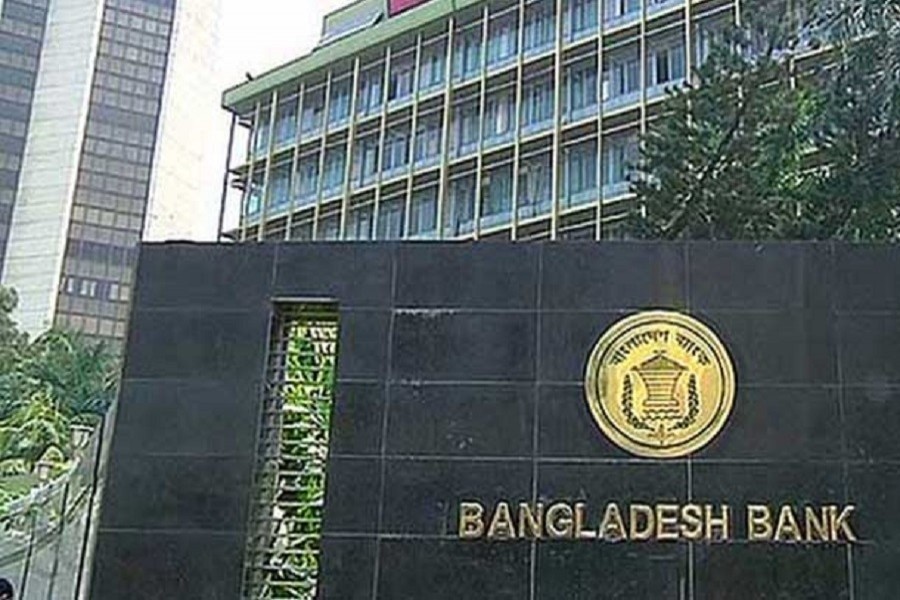 The Bangladesh Bank seal is pictured on the gate outside the central bank headquarters in Motijheel, the bustling commercial hub in capital Dhaka. Photo: Internet

"We've imposed the fines with substantial amount of money on the banks for violating the rules of the existing Banking Companies Act and the central bank's instructions on share-market investment," a senior official of the Bangladesh Bank (BB) told the FE Sunday.

He wouldn't name the names of the errant banks and the amount of money which will be deducted from their accounts as penalty.

Sources, however, said the central bank has already informed the banks concerned about the punitive action.

One bank or two had exceeded their share-market-exposure limits on consolidated basis, they said, adding that the rest of the banks had provided fake information on their investment in stocks to the BB on weekly and monthly basis.

Besides, the banks invested their funds further in the share market while having total investments above the prescribed limits, they added.

On the other hand, the central bank brought eight more banks under its close monitoring after it had detected anomalies in their recent share- market activities.

"Our investigations against the banks have almost been completed," another central banker told the FE, without mentioning the name of the banks.

He also said the central bank will take action against the banks after completing the investigations.

Around half a dozen other banks are set to be included in the BB's close-monitoring list, the central banker hinted.

Both public and private commercial banks are included in the central bank's watch list, according to the insiders.

Earlier on September 11 last, the central bank intensified its monitoring and supervision on banks' investment in the capital market through revising reporting format for avoiding recurrence of an unwanted situation in future.

Under the revised provisions, the banks are now allowed to submit their reports on fresh investment in the capital market to the BB on a weekly basis, mentioning daily transactions separately.

Earlier, the banks were eligible for submitting such weekly reports to the central bank on gross-transaction basis without mentioning daily transactions individually.

The BB's latest move comes against the backdrop of a sharp rise in the prime index of the Dhaka Stock Exchange (DSE) in recent months.

The market rose sharply on the back of large-cap shares, especially heavyweight banking sector, which led to the rise in daily turnover and the list of gainers in recent weeks, according to the market operators.

They also said the increase in excess liquidity in the banking sector opened up fresh opportunity for banks to invest more in stocks through lending to merchant banks.

In 2014, the central bank asked the banks to limit their total investment in capital market on consolidated basis along with the existing solo one to minimise risk in investment portfolios.

Under the exiting provisions, the market value of total investment of a banking company in the capital market on consolidated basis will not exceed 50 per cent of the sum of its consolidated paid-up capital, balance in share-premium account, statutory reserves and retained earnings as stated in the latest audited financial statements.

On the other hand, the banks are now allowed to invest maximum 25 per cent in the capital market of their total capital on solo basis in line with the Banking Companies (Amended) Act 2013.

While calculating total investment in capital market different components including all types of shares, debentures, corporate bonds, mutual fund units and other capital-market securities will be taken into account.