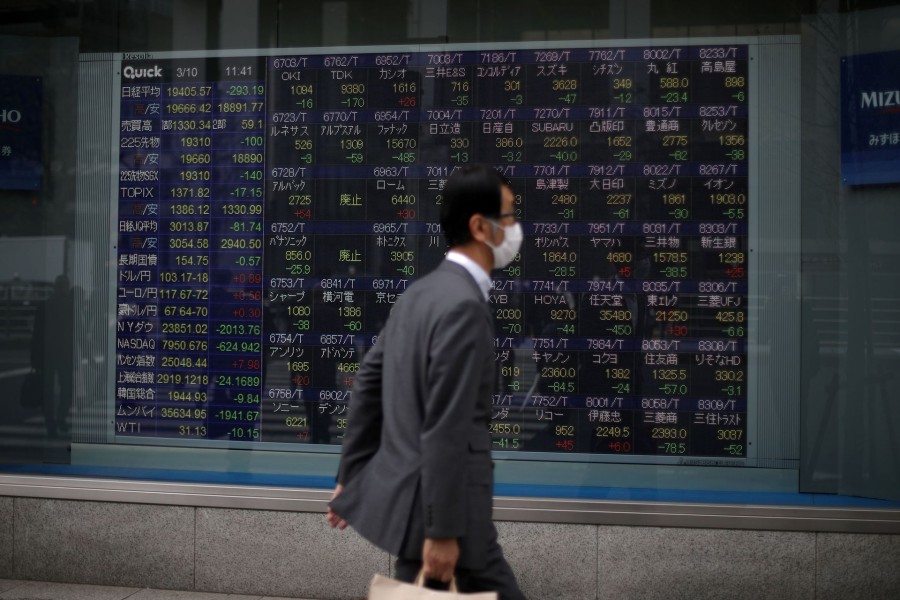 A man wearing protective face mask, following an outbreak of the coronavirus disease (COVID-19), walks in front of a stock quotation board outside a brokerage in Tokyo, Japan on March 10, 2020 — Reuters/Files

Asian equity markets and the euro suffered heavy losses on Friday while oil prices jumped as investors took fright from reports of a nuclear power plant on fire amid fierce fighting between Ukraine and Russian troops, reports Reuters.

The risk-off appetite battered markets across the region, sending US stock futures also sharply lower, suggesting more pain for European and US markets when they open later in the day.

RIA News agency cited the Ukrainian atomic energy ministry as saying that a generating unit at the Zaporizhzhia nuclear power plant, the largest of its kind in Europe, had been hit during an attack by Russian troops.

While prices since climbed off their morning lows on reports there was no immediate change in radiation levels in the area, investors remain extremely anxious.

"Markets are worried about nuclear fallout. The risk is that there is a miscalculation or overreaction and the war prolongs," said Vasu Menon, executive director of investment strategy at OCBC Bank.

MSCI's broadest index of Asia-Pacific shares ex-Japan tumbled as much as 1.6 per cent to 585.5, the lowest level since November 2020, taking the year-to-date losses to 7 per cent. It regained some losses but was still down 1.1 per cent.

"Markets don't want a contagion effect and more European countries impacted by the crisis," said Menon. "If investors are looking to buy, they need to have a strong and long-term risk appetite."

Stock markets across Asia were in a sea of red, with Japan losing 2.4 per cent, South Korea 1.2 per cent, China 0.9 per cent and Hong Kong 2.5 per cent. Commodities-heavy Australia was also not spared in the rout and shed 1 per cent.

S&P 500 futures pared early losses but were still down 0.6 per cent and Nasdaq futures gave up 0.8 per cent. Overnight, Wall Street ended lower as investors remained on edge over the Ukraine crisis, while rising prices of commodities also weighed on market sentiment.

Investors sought refuge in safe-haven US Treasuries, sending yields on benchmark 10-year yields as much as 14 basis points lower to 1.7 per cent. They later inched back up to 1.8 per cent.

Oil prices jumped on Friday after ending steady a day earlier, with the market also focused on whether the OPEC+ producers, including Saudi Arabia and Russia, would increase output from January.

Brent crude futures for May rose to as much as $114.23 a barrel. The contract fell 2.2 per cent on Thursday.

The jump in commodity prices has however raised concerns about the potential for stagflation, in which rising inflation and stagnant output roil the economy and crimp employment.

Aluminium, copper and nickel prices have raced to fresh highs as the widening sanctions on Russia threatened to further disrupt the flow of commodities from one of the world's major producers.

In currency markets, the euro lost further ground and was set for its worst week versus the dollar in nine months. It fell 0.3 per cent to $1.10335 and traded above the day's lows. It has lost about 1.8 per cent this week, which would be the euro's worst week since June 2021.

Federal Reserve Chair Jerome Powell on Thursday repeated his comments from Wednesday that he would back an initial quarter percentage point increase in the bank's benchmark rate.