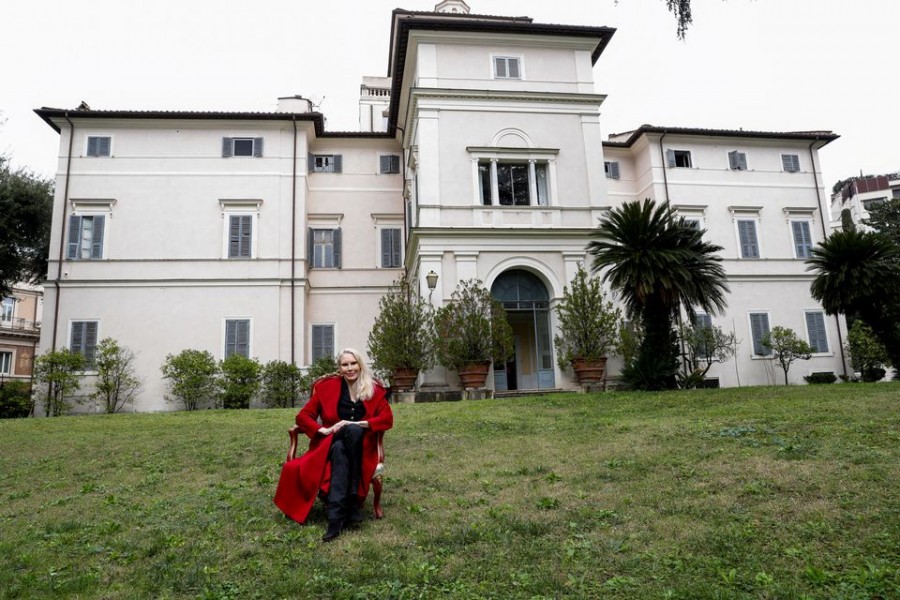 Princess Rita Boncompagni Ludovisi poses for a photograph outside Villa Aurora, a building that boasts Caravaggio's only ceiling mural, which is up for auction in January with an opening bid set at 471 million euros, in Rome, Italy, November 16, 2021. REUTERS/Remo Casilli

A villa in Rome containing the only known ceiling painted by Caravaggio went on a court-ordered auction block Tuesday, thanks to an inheritance dispute pitting the heirs of one of Rome’s aristocratic families against their stepmother, a Texas-born princess.

Princess Rita Jenrett Boncompagni Ludovisi, formerly known as Rita Carpenter, woke up Tuesday in the Casino dell’Aurora surrounded by her dogs on what might have been the last day that her home of nearly two decades was actually hers.

An online auction organised by the Rome tribunal began at 3 p.m. and closed a short time later without a winner. The starting bid had been set at 353 million euros ($400 million), and the villa just off the famous Via Veneto was assigned a court-appraised value of 471 million euros ($533 million), reports the Associated Press.

With no winning bids in the first round, the villa will go up for auction two more times at lower prices, and the Italian Culture Ministry can try to match the highest bid at any stage. The next round is scheduled for April 7.

“It’s been emotional since I received the notice from the judge on Sept. 2. I’ve rarely slept,” Boncompagni Ludovisi told The Associated Press before the auction began. “It’s like going through the stages of death and dying. ... You’re angry at first, and then you can’t believe it, and then you finally go into a point of accepting it.”

The house, built in 1570, has been in the Ludovisi family since the early 1600s. After Prince Nicolo Boncompagni Ludovisi died in 2018, the villa became the subject of an inheritance dispute between the children from his first marriage and his third wife, the San Antonio, Texas-born Princess Rita.

The villa, also known as Villa Ludovisi, was one of 42 lots up for court-ordered auction Tuesday but was by far the most prestigious and expensive, thanks to the Caravaggio that graces a tiny room off a spiral staircase on the second floor.

It was commissioned in 1597 by a diplomat and patron of the arts who asked the then-young painter to decorate the ceiling of the small room being used as an alchemy workshop. The 2.75-meter (9-foot) wide mural, which depicts Jupiter, Pluto and Neptune, is unusual: It’s not a fresco, but rather oil on plaster, and represents the only ceiling mural that Caravaggio is known to have made.

“It’s probably the first work of Caravaggio’s that we know of, so historically, it’s a really a milestone,” said Claudio Strinati, an art historian and Caravaggio expert. “It’s a beautiful piece about a mythological theme, which is rare in Caravaggio’s art because he mostly dealt with sacred themes.”

“So it’s a painting of real artistic and historic importance, and of great beauty,” he said.

The listing on the Rome tribunal’s auction site highlights the Caravaggio among the home’s other attributes, but notes the villa will need an estimated 11 million euros ($12.5 million) in renovations to comply with current building standards.

“I had always wanted to turn it into a museum, actually, but that’s not going to happen,” Boncompagni Ludovisi said Tuesday as she took visitors on a tour. “So my hope is that whomever buys it will treat it with the care and love that my husband and I did.”

The American princess, who previously was married to former US Rep. John Jenrette Jr. of South Carolina, married Boncompagni Ludovisi in 2009. At the time, the villa had fallen into disrepair, and her husband only used it as an office.

Together, they tried to renovate it as best they could. They opened the house up to visiting students and tour groups and hosted dinners to bring in revenue, and thanks to funding from Rutgers University helped to digitise the family archives.

Boncompagni Ludovisi doesn’t know what will come next. With no immediate buyer, she has more time in the villa but assumes eventually she’ll have to move out. She would like to meet the new owners, give them a tour and teach them some of the history in hopes that they’ll keep the home open for the public to enjoy.