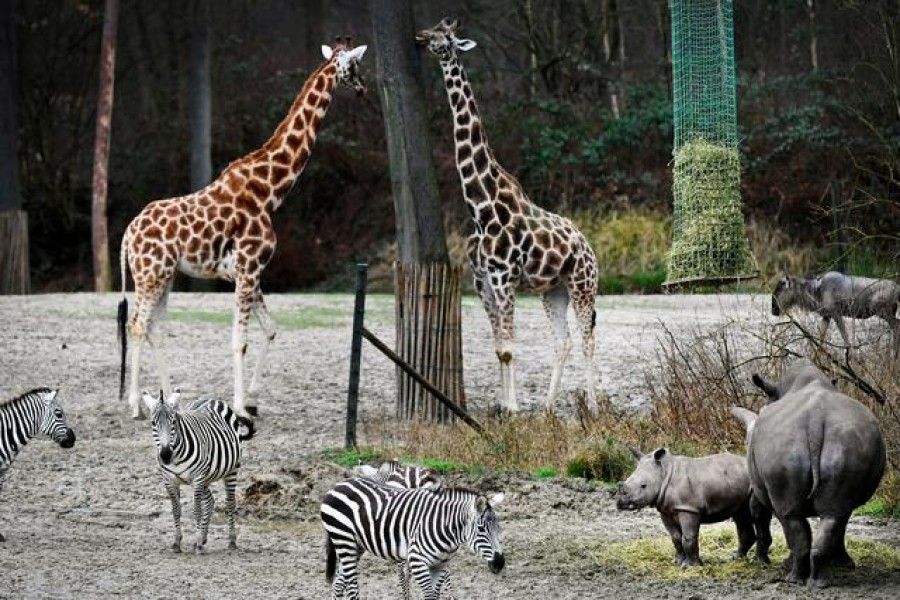 A rhinoceros meets giraffes and zebras on the savanna for the first time at a zoo in Arnhem, Netherlands February on 10, 2022 — Reuters photo

Stark the rhino calf touched noses with a zebra but found an inquisitive giraffe a bit too tall for comfort when he ventured out of his Dutch zoo enclosure for the first time on Thursday, reports Reuters.

Under the watchful eye of his two-tonne (4,400 lb) mother, the three-month-old took the measure of the 10-hectare expanse of land that will be his new home, cautiously interacting with some of the other animals he might encounter on the African savannah.

"He was curious... (and) also a little bit anxious," said Bas Lukkenaar, media spokesman at Burgers' Zoo in Arnhem. "But everything went very well."

Stark, a square-lipped rhinoceros, was born in late October but the zoo has waited until now to introduce him to other species.

Lukkenaar said keepers wanted to be sure the calf, who was around 50kg at birth and now weighs more than 200kg, would be robust enough to cope with any "skirmish".

With rhinoceros species endangered, Stark will remain in Arnhem until he is about three years old, when he will be transferred to another zoo as part of a European breeding programme.

'90s fashion trends that are making a comeback