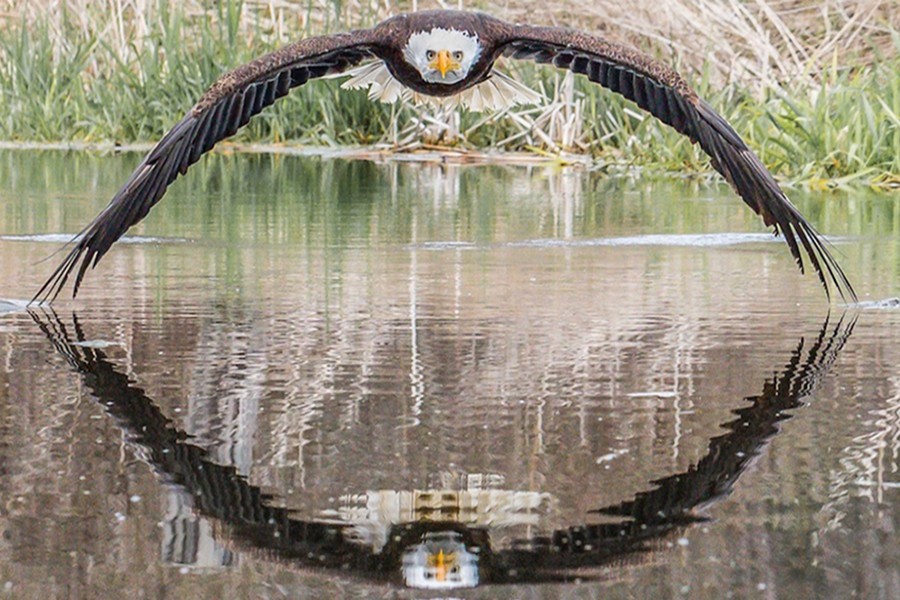 A Canadian amateur photographer says he is "overwhelmed" by the worldwide response to a photograph he took of a bald eagle recently.

Steve Biro snapped the image of Bruce the bald eagle at the Canadian Raptor Conservancy and first posted it on some Facebook photography groups.

The image of the bird of prey "staring daggers" at the photographer with its piercing eyes has since gone viral.

The photo is one of several hundred Mr Biro took of the bird that day, according to a BBC report Tuesday.

"He's squared up perfectly, both wings are touching the water," he told the BBC. "That [photograph] was the one that struck me as little more special than the others. But I still didn't even know how it would resonate with people."

The photograph eventually made it to the front page of Reddit and has since been picked up by media around the world.

Birds are usually undisturbed by photographers visiting the Canadian Raptor Conservancy in Ontario. But Mr Biro says the eagle seemed irked at where he was positioned with his camera.

"He was actually trying to brush me away from where I was perched," he said.

"I could feel the breeze from his wings as he flew over me. The other people who were there were gasping as he came over my head. It was really quite exhilarating."

Mr Biro said as soon as he got up off the rock where he had been sitting, Bruce the eagle flew over and claimed the spot.

The amateur photographer began taking photos about 10 years ago as a hobby - "nature pics, landscapes, city pics, I love it all".

But he says he has a soft spot for capturing images of birds.

"There's something about birds that to me is captivating," Mr Biro said.

"The way they hunt, the way they interact. Sometimes you'll see them do things. They'll be playful, just like children. It's amazing how you'll see aspects of humanity in birds - and in animals overall."

Mr Biro says photography challenges him to see the world "like I'm a child again".

In the United States, where the bird is the national emblem, it nests in more than half the country. In Canada, it's more commonly found in British Columbia, across the prairies and in parts of Ontario.